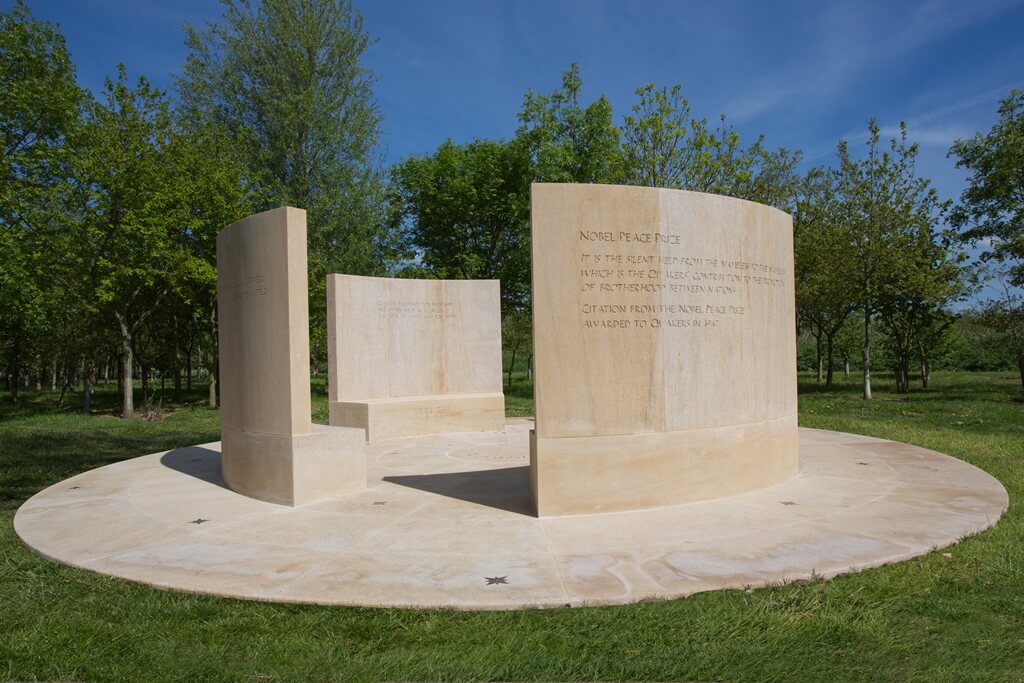 It is believed that as many as 20,000 men from all walks of life were originally on record as conscientious objectors between 1916 and 1918, refusing to fight in the First World War for religious, political or humanitarian reasons. They appeared before local tribunals to have the sincerity of their claim interrogated – often humiliatingly and aggressively – in public.

These tribunals were biased towards believing the objectors were acting from cowardice not conscience.  It was a time when white feathers symbolising cowardice were forced on men in the street who were not in uniform.

Here are 7 memorials to those who courageously resisted the call to renounce their principles.

In 1916 many hundreds of conscientious objectors were sent to Richmond Castle in North Yorkshire (now an English Heritage site) to be held in the Castle’s cold, dark cramped cells, sometimes on a punishment diet of bread and water. Yet despite this, accounts written by some of them revealed their optimism, solidarity and strong convictions.

The most remarkable expressions of this, and a lasting memorial to those imprisoned, are the hundreds of examples of graffiti that cover the walls of their cells; portraits of loved ones, religious verses, hymns and political slogans. English Heritage’s Richmond Castle:  cell block project is currently conserving the fragile graffiti to ensure that it is preserved for future generations.  This will enable the public to view the cells for the first time in more than 30 years.

Among these conscientious objectors were the ‘Richmond Sixteen’, who were transported in 1916 ­to a military camp near Boulogne, France.  Once in France they were all considered to be on active service which meant that disobedience was a capital offence and they could be executed by firing squad.

The military wanted to make an example of them to deter others from seeking exemption from military service. After refusing an order, the Sixteen were court martialled and sentenced to death, but this was immediately commuted to 10 years penal servitude by the Prime Minister Herbert Asquith, who gave a secret order that no conscientious objector was to be shot for disobeying orders.

On their return to England, the men joined others in civil prisons and work centres until beyond the end of the war.  Even after their release, some found it impossible to live normal lives in the face of continuing hostility from employers and local communities.

An unknown number of conscientious objectors went on the run for varying periods, some abroad, others hidden by family or friends, or by various networks of contacts and safe houses.  Some of those who were members of the Socialist Labour Party (SLP) took to the hills, not as a way of escape, but so they could carry on campaigning against the war and agitating for social change.  Forming what they termed ‘Socialist flying corps’ they descended on places to hold meetings and distribute leaflets before disappearing again to a safe house to avoid capture.

Green Moor farm in Cumbria was one such safe house, used as refuge by SLP groups from West Yorkshire and Lancashire.  A rocky outcrop above the farm may have acted as a vantage point to look out for the police, but it also became a memorial record of the groups’ presence and struggle.  Among other inscriptions, the outcrop has rough carvings in the stone that includes the date 1916 and the words CONs OBJECTORS, along with six sets of initials.

Lemington is the only freestanding memorial so far identified in England to carry the name of a conscientious objector among its inscriptions of the First World War dead – Walter Messer who was a Quaker.

The principles of the Quakers’ Peace Testimony, which supports peace and opposes participation in war, meant that the majority of Quakers felt unable to serve in the Armed Forces in wartime.

Walter Messer was a volunteer ambulance driver with the FAU whose duty was to drive as close to the front line as permitted to collect the wounded and take them to the nearest dressing station. He was killed during an air raid on 28 November 1915 aged 20. His inscription on the Lemington War Memorial has FAU before his name.

Inaugurated in 2013, this major new memorial for the Religious Society of Friends (Quakers) celebrates the humanitarian role undertaken by members of both the FAU, and the FWVRS.  The 17 stars set in the memorial’s floor represent the 17 members of the FAU who lost their lives in the Second World War.

The memorial features four stone benches arranged in an open circle – as are many Quaker meetings held for worship – symbolic of unity and equality.

This memorial, co-ordinated by the Peace Pledge Union, is a 400 million year old slate boulder, symbolising resistance in the face of all odds.

TO ALL THOSE WHO HAVE ESTABLISHED AND ARE MAINTAINING THE RIGHT TO REFUSE TO KILL. THEIR FORESIGHT AND COURAGE GIVE US HOPE.

Running round the edge are the words:

TO COMMEMORATE MEN AND WOMEN CONSCIENTIOUS OBJECTORS TO MILITARY SERVICE ALL OVER THE WORLD AND IN EVERY AGE.

Tavistock Square was chosen as it had already informally become a place of peace with a statue of Mahatma Ghandi and a memorial cherry tree to the victims of Hiroshima and Nagasaki.

Every year on 15 May – International Conscientious Objectors Day, a ceremony is held at the stone where the names of conscientious objectors past and current from many countries are read out and a symbolic white flower for each is placed against the boulder. In addition white poppy wreaths are laid there every Remembrance Sunday.

The plaque commemorates 70 British First World War conscientious objectors known at that date to have died during or immediately after the First World War.  Current research has revealed there were more than 100.

This memorial remembers Leicester and Leicestershire’s 250 conscientious objectors who refused to fight in the First World War, two of whom died after being imprisoned for their beliefs.

Do you know about other memorials to conscientious objectors in the First or Second World Wars? Tell us about them in the comments below.

1 comment on “Thou Shalt Not Kill: 7 Sites of Memory to Conscientious Objectors”