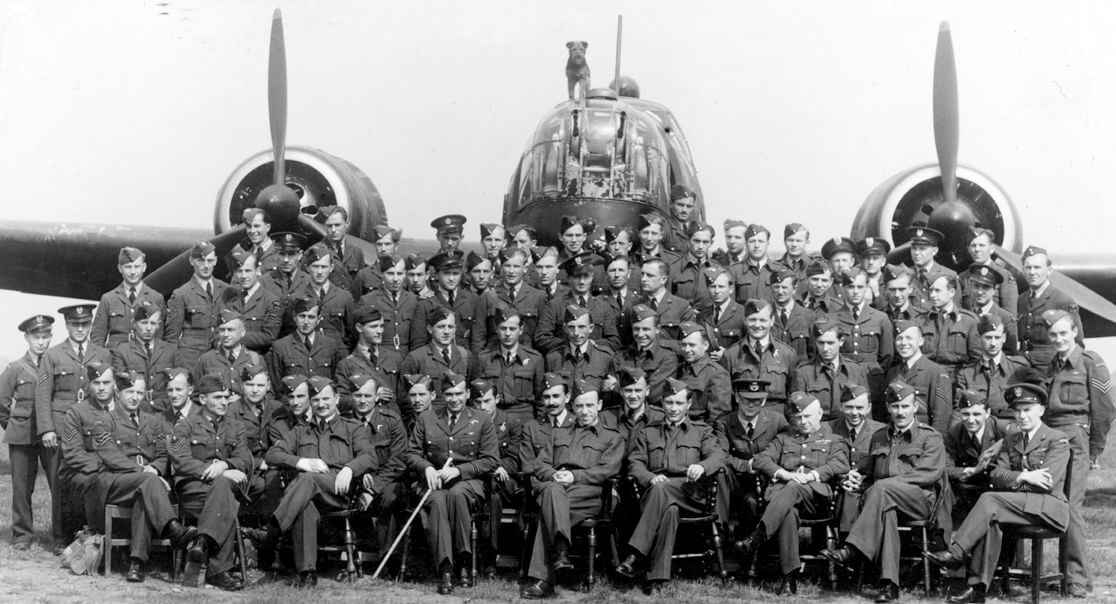 The First and Second World Wars were truly global in scale and involvement. Hundreds of thousands of soldiers died supporting the British army, including troops from the colonies, and European countries that had been invaded by enemy forces.

Here are 6 sites in England which pay homage to the enormous contribution made by foreign soldiers during the First and Second World Wars.

Header image: No. 305 Polish Bomber Squadron taken in 1942 at RAF Cammeringham in Lincolnshire.

Completed in 1948, this memorial bears the names of Polish pilots killed in action, with the crests of the RAF squadrons they served in. Polish pilots made up the largest non-British group within the RAF and were integral to victory in the Battle of Britain.  Commander-in-Chief of Fighter Command, Air Chief Marshal Sir Hugh Dowding, said ‘Had it not been for the magnificent work of the Polish squadrons and their unsurpassed gallantry, I hesitate to say that the outcome of battle would have been the same’.

Built overlooking the city of Brighton, The Chattri stands where Hindu and Sikh soldiers who died during the First World War in the military hospital at the Royal Pavilion, were cremated. Indian architect, E. C. Henriques, designed the memorial which was officially unveiled in 1921 by Edward, Prince of Wales. The inscription gives thanks ‘to the memory of all the Indian soldiers who gave their lives’.

Over a million troops from India (including what is now Pakistan and Bangladesh) fought for Great Britain in the First World War.  Under pressure from German propaganda, which implied that Britain was burying its Muslim soldiers in a disrespectful way, the government built a burial ground in Woking, close to Britain’s only purpose-built Mosque. Nineteen Muslim soldiers were buried here in the First World War and a further five in the Second.  Vandalism meant that the burials had to be moved to the military cemetery at Brookwood, but the site has recently been restored and is now a Memorial Garden for all Muslim soldiers who fell in the World Wars.

Located in the Hollybrook Cemetery, the memorial was built to commemorate the 1,897 servicemen and women of the Commonwealth ‘whose graves are not known’.  It remembers a number of vessels that sunk during the First World War, and almost a third of those memorialised were members of the South African Native Labour Corps (SANLC) who were killed when their ship, the SS Mendi, sank in 1917.  These men were non-combatants, part of a huge but poorly-treated labour force that built railways, trenches, camps and roads to support the Allies. Many had joined the SANLC hoping that by showing their support for the British Empire they might gain a voice in South Africa.

In 1941 the BBC World Service moved to Bush House in central London, and for the remainder of the Second World War broadcast across occupied Europe.  The Free French (the French Government in exile in London), used the BBC’s Radio Londres broadcasts to counter Nazi propaganda within France, and also to send messages to the French Resistance.  In 1944 an alert to the resistance about the imminence of the D-Day landings was broadcast across the airwaves in coded ‘messages personnels’ – short lines from poems and literature.

The Women’s Transport Service (FANY) was an all-women unit, formed as the First Aid Nursing Yeomanry, who were active in providing medical and espionage work.  Located in the Grade II* listed St Paul’s Church in London’s Knightsbridge, the memorial commemorates 52 women from the unit who died during the Second World War.  The list includes Noor Inayat Khan, born in St Peterbsurg to an American mother and an Indian Muslim father.   She was raised in Paris but came to London in 1940 to support the war effort.  Recruited to join the Special Operations Executive, she was captured in Paris and imprisoned.  Over the coming ten months she endured torture and shackling, and yet held firm in her refusal to provide any useful information.  Khan was eventually executed at Dachau. A memorial installed by The Noor Inayat Khan Memorial Trust (pictured) was unveiled in 2012 by HRH The Princess Royal in Gordon Square, London.

Do you know of other listed war memorials to overseas soldiers? Tell us about them.

England’s most significant historic buildings and places are listed so they can be understood and protected. The List has almost 400,000 entries on it, from palaces and pigsties to cathedrals, windmills and rollercoasters.

For the first time, The List is now open for your contributions. We are asking people to share images, insights and secrets of these special places to capture them for future generations. Can you help us Enrich the List?

4 comments on “6 Sites of Memory for Overseas War Heroes”