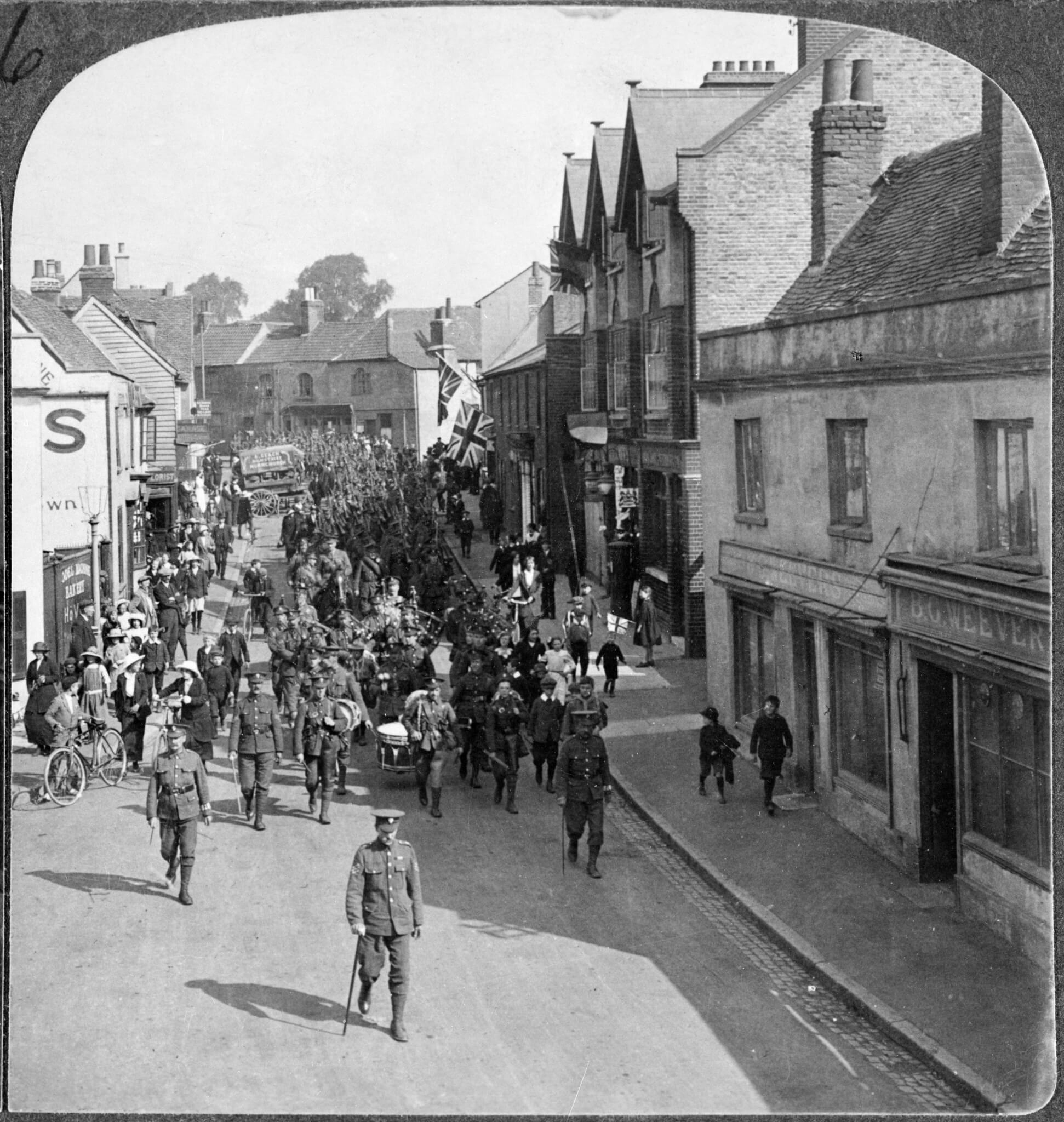 There are few towns or villages in Britain that do not have a public memorial to commemorate those who died in the First World War; a sobering testament to the scale of the loss involved in the conflict. In Britain, around six million men were mobilised, and of those just over 700,000, or 11.5%, were killed. Over half a million men who served in the British army have no known graves.

There are more than 100,000 war memorials in the UK. They take many forms, including cenotaphs, plaques and gardens. Each one represents the stories of a generation of British people at a time of horror, loss and grief.

Here are five memorials that tell a story of the people and their war.

The Lewisham War Memorial is partly dedicated to the men of the 11th Lewisham Battalion who were killed in the war. The 11th was formed in 1915 as part of Kitchener’s recruitment drive, which saw almost two and a half million civilian ‘Tommies’ enthusiastically join up. The first Lewisham recruits signed up in May 1915 after a meeting at the local skating rink, and then did the rounds of local cinemas, theatres and concert halls to encourage new volunteers.

‘In spite of the damping influence of the weather, enthusiasm was great, the men marching briskly to such tunes as ‘The Girl I Left Behind Me’ and ‘Auld Lang Syne’. By the time the second half of the Battalion moved off, the crowds had increased tremendously, much of the route being lined with the children from the schools of the district… Gifts of cigarettes and ‘Khaki Testaments’ were distributed to the troops who were in fine fettle’.

From The History of the 11th (Lewisham) Battalion, Captain RO Russell MC.

The Lewisham Battalion left for the Western Front in December 2015. Of the three thousand men of the battalion who went off to war, 1,812 were killed or wounded.

Captain Russell dedicated his book to the lost: ‘To the Undying Memory of our Comrades… who have preceded us to the Great Beyond’

Bradford War Memorial was unveiled in front of a crowd of around 40,000 people on 1 July 1922, the sixth anniversary of the first day of the Battle of the Somme. The choice of date was particularly poignant as there were a high proportion of casualties from the Bradford ‘Pals’ Battalions during the battle. Pals Battalions ensured that friends, relatives, workmates and communities who signed up together could serve together. This gave new battalions a morale boost, but when heavy casualties were suffered, the impact on communities was severe.

On 1 July 1916, 2,000 men from the Bradford Pals Battalions took part in an attack on the village of Serre, the most northern point of the Somme offensive. Around 1,770 were killed or wounded during the failed attack, many of whom had been hit by shrapnel and bullets even before they were able to get to their start positions.

You who have heard the bell, seen the boy stand

Holding the flimsy message in his hand

While through your heart the fiery question thrilled

“Wounded or killed, which, which?”–and it was “Killed–“

From April 1918 by Henry Christopher Bradby

In recent years, Shorne Parish Church has compiled much information about the 21 men commemorated on its memorial, including contemporary obituaries from the local newspaper, the Gravesend Reporter. One man, Private W Accleton left ‘a sorrowing wife and four children’. Gunner Frederick Baker was killed the same day as another soldier from his battery and they are buried side by side.

Lance Corporal Griffin’s mother received word of her son’s death by letter, ‘Your son was killed yesterday by a shell, which burst at his billet, his death being absolutely instantaneous. The loss is deeply felt by the whole company, as he was one of the nicest and most reliable of men. You have our most heartfelt sympathy in your great loss. The funeral took place on the same afternoon’.

Edward Caller died of wounds received in France on 28 August 1915, aged 23. His brother died in hospital in Salonika on 19 November 1918, eight days after the armistice had been signed.

The memorial to the 36 men of the parish of Skirbeck was unveiled on Sunday 5 December 1920 and was typical of dedication services in parishes throughout England. A service in the church was conducted and a sermon given by the chaplain,  dressed in his wartime uniform. Following prayers and a hymn, the clergy, choir and congregation processed to the churchyard, encircling the memorial. The crowd sang the hymn, On The Resurrection Morning:

‘On the resurrection morning
Soul and body meet again;
No more sorrow, no more weeping,
No more pain’

The Union flag veiling the memorial was then removed and holy water sprinkled on it. There was a minute’s silence followed by the sounding of the Last Post. A muffled peal of the church bells rang. Finally, relatives and friends of the dead men laid floral tributes on the memorial; an action to be repeated for the next 96 years.

And over the stairway, at the foot — oh! here, leave desolate, passionate hands to spread
Violets, roses, and laurel, with the small, sweet, tinkling country things
Speaking so wistfully of other Springs,
From the little gardens of little places where son or sweetheart was born and bred.

From The Cenotaph by Charlotte Mew.

This memorial now commemorates 23 men from the parish who were killed during the conflict, but the names of three brothers were missing from the roll call for over 90 years.

Herbert Goldspink, aged 20, was killed in action in Flanders on 26 September 1915. His brothers, Arthur, 23, and Charles, 25, were killed on the same day, 19 July 1916, during the Battle of the Somme. It isn’t known why the names were originally missed from the memorial; it was only after the Goldspink’s ancestors began researching their family tree that the omission came to light. The brothers names were added in 2008, finally joining those of two of their cousins who are also commemorated on the memorial.

All over the country, communities are taking on the research and conservation of their local war memorials. You too can get involved in researching, recording, protecting and looking after the war memorials you care about.

Visit our web pages to find out how you can get involved.