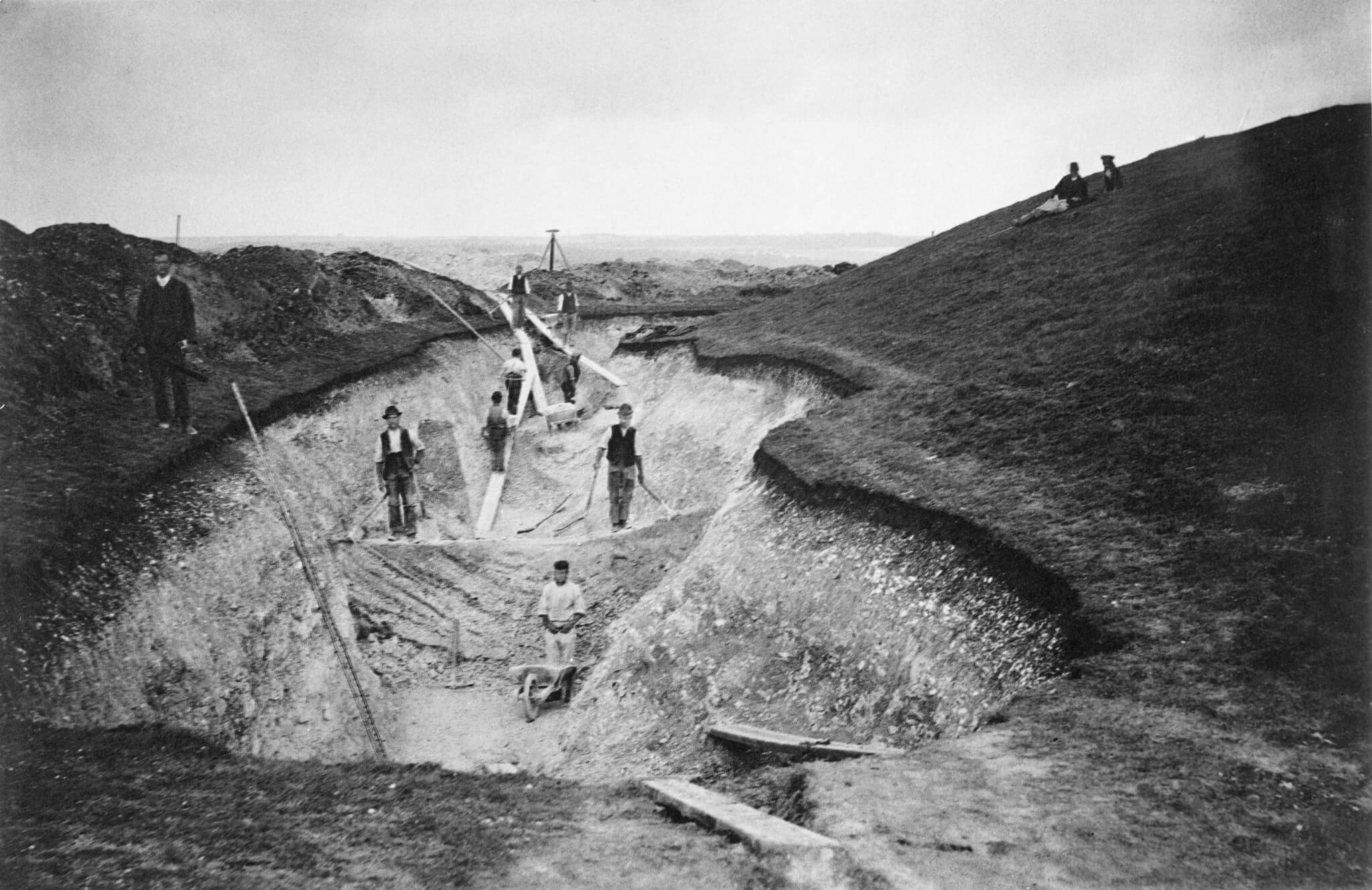 Long barrows are the burial places of Britain’s early farming communities and are the oldest monuments surviving in our landscape. These earthen mounds acted as funeral monuments during the Early Neolithic (3700-3500 BC) and reveal much about the communities buried within them.

Peter Marshall, Historic England’s Scientific Dating Coordinator and Jonathan Last, our Landscape Strategy Manager, take us through new findings from an extraordinary long barrow excavated over a century ago.

Wor Barrow lies within Cranborne Chase in Dorset, an area renowned for its prehistoric archaeology. It was investigated by the ‘father of scientific archaeology’, General Pitt Rivers, during 1893 and 1894 and became the first Neolithic long barrow to be completely excavated and recorded to ‘modern’ standards.

Over 120 years later, the archaeological finds and field notebooks, now housed in Salisbury and South Wiltshire Museum, are still being studied, and yielding new insights.

In 2007, a number of southern British long barrows were redated using new techniques, changing our view of how these monuments were used.

Rather than burials taking place over a long period, radiocarbon dating found that these long barrows were used for burial of the dead only during a limited period of time in the late 38th and 37th centuries BC (c 5750–5600 years ago).

This raised questions about Wor Barrow, which was built differently from the other long barrows and had long been considered as rather later in date. To see how Wor Barrow related to these sites, the artefacts and field notes from Pitt Rivers’ excavations were reanalysed.

The results from the Wor Barrow analysis showed that six people were buried in a wooden box set within a mortuary structure. After this a turf mound was built over the box containing the human remains, substantial ditches were cut with antler picks, and the excavated chalk used to construct a mound over the entire mortuary structure, creating the barrow.

The human remains were dated and found to have been buried in the 37th century BC, placing Wor Barrow in a broadly similar time frame to the other long barrows in southern England. This demonstrated that different forms of funerary monuments were being constructed at the same time in the Early Neolithic period. Rather than conforming to a blueprint, each barrow was the result of choices made by local communities.

After Wor Barrow had been constructed, another individual (referred to as ‘Burial 8’) was buried in the ditch. The body had been tightly wrapped and preserved for between 30 and 130 years before it was deposited in the barrow, making it the earliest known ‘mummy’ in Britain. It is unclear what, if anything, was special about this person, although they probably met a violent death as a flint arrowhead was found between their ribs.

Who Was Buried in Wor Barrow?

Analysis of the bones of the individuals buried at Wor Barrow has also provided much information about their lives. Six were adult men under the age of 45 when they died, while the sex of the seventh person could not be determined. They were between 5′ 1″–5’9″ in height, and had a diet that was relatively high in animal protein, which is the norm for Neolithic people. The evidence also points to them all having lived their lives in the vicinity of Cranborne Chase, as part of a local community.

Three of the men had suffered leg injuries which had subsequently healed. The causes of their injuries are unclear, though in light of the arrowhead found with Burial 8, violence is a possibility. Another of the men had evidence of a congenital or developmental syndrome, which would have shown itself as a facial disfigurement and possibly a physical disability requiring the use of a crutch.

This analysis of these human remains, first excavated over 120 years ago, highlights the importance of long-term curation of archaeological finds. It has revealed that different forms of Early Neolithic burial monuments were constructed in the same time period, and showed how some of the dead were treated in unusual ways. It has also provided insights into the lives of a Neolithic community, hinting at the dangers they faced but also at the care expressed for a young man with a disability, who was treated with the same reverence in death as other members of the community.