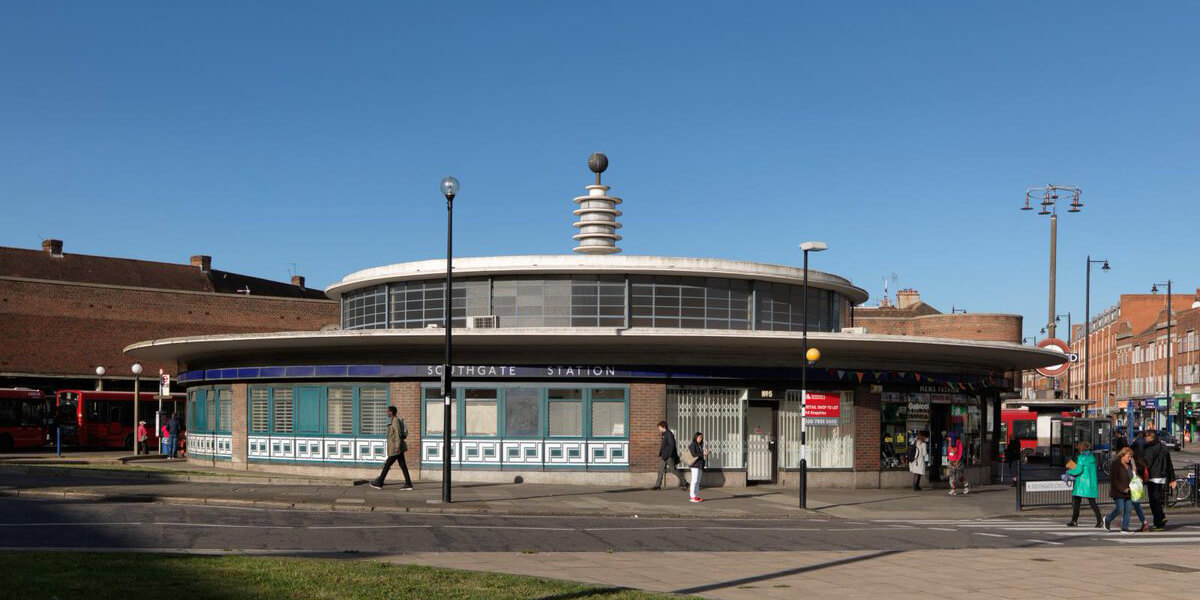 London Underground is the world’s oldest metro system: the first journey took place on 10 January 1863, when the Metropolitan Railway opened to the public.  On its first day, 38,000 people day took the 18 minute journey between Paddington and Farringdon.

The underground has a history of thoughtful and thorough design and detail; from the commission of the Johnston typeface in 1913, to Harry Beck’s iconic 1930s design for the tube map, to the recent redesign of station staff uniforms by HemingwayDesign.

Here we explore some of its architectural highlights.

Commissioned in 1903 to design 50 new stations, Leslie Green developed a distinctive style, which he adapted to fit different sites, and which will be familiar to visitors to north London in particular.  The design included oxblood coloured tiles on the exterior and green tiles within the ticket halls.  Good examples can be found throughout the Piccadilly and Northern Lines, notably Belsize Park, Covent Garden and Holloway Road.

The massive expansion of suburbia through North West London and into Buckinghamshire, Hertfordshire and Middlesex was intrinsically linked to the expansion of the tube.  The architect Charles W. Clark was responsible for 25 stations along the Metropolitan line, adopting classical principles for stations in central London (such as the Grade II* Baker Street, and Chiltern Court, which sits over it) and more vernacular styles in the suburbs (such as at the Grade II listed station at Watford).

Of the 71 listed London Underground stations, 31 were built to designs by Charles Holden, either alone or in partnership with other prolific architects of the 1920’s and 30’s. Holden’s career spanned architectural styles, and his work includes the London underground headquarters (inclusive of St James’s Park station underneath), bold modernism across the Piccadilly Line and the Soviet inspired Gants Hill in north east London.

After the Second World War, tube construction was slowed by austerity.  The Victoria Line was built in the 1960’s but primarily connected existing stations.  In 1979 the Jubilee Line opened and in 1999 the eastern extension connected Westminster and Stratford, taking in the urban renewal of Docklands.  Intended as the ‘showpiece’ of the extension, Norman Foster’s Canary Wharf station is one of the most loved and most popular designs.

8 comments on “Amazing Architecture on the Underground”