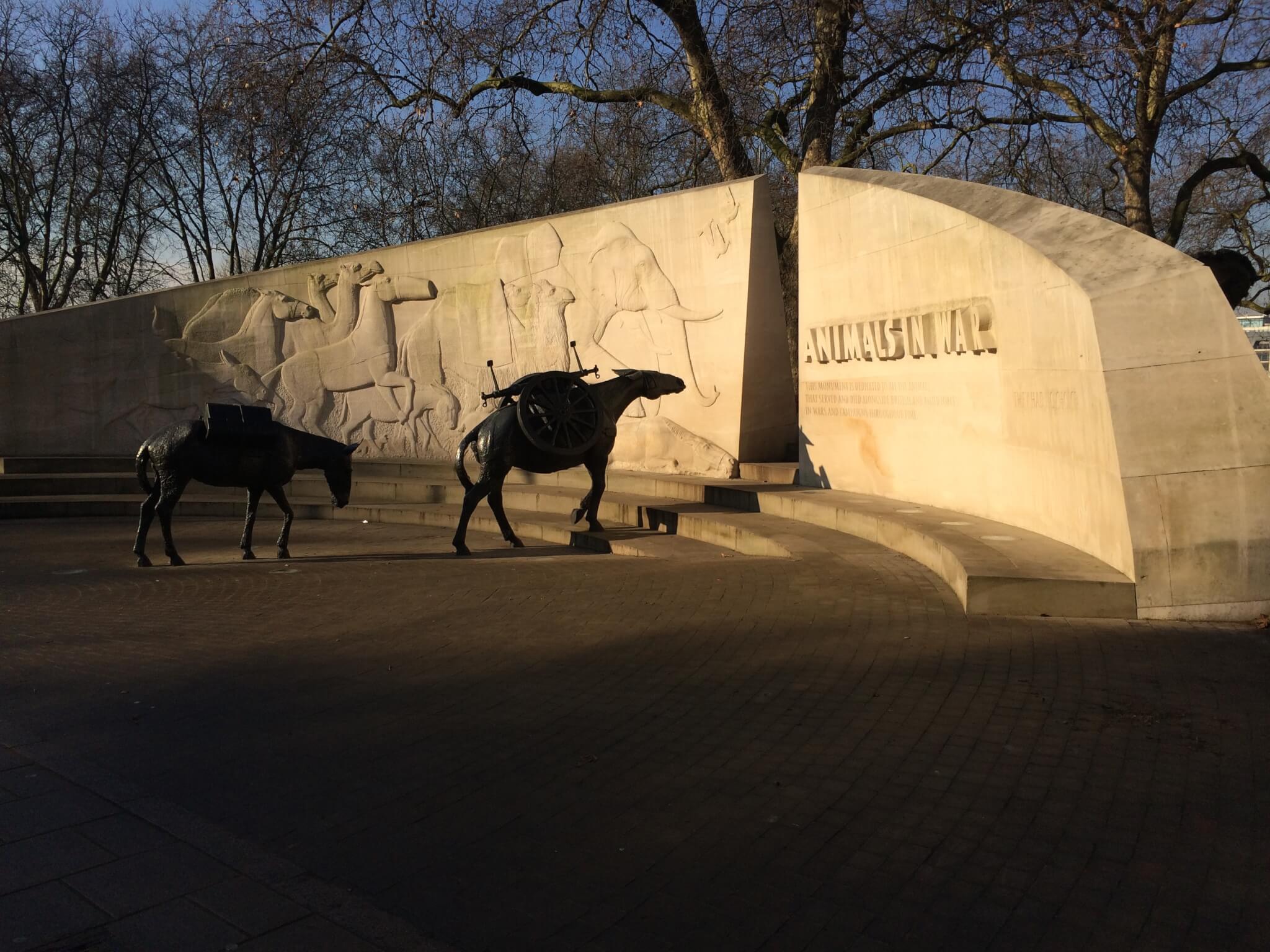 The First World War saw the development of industrialised mechanised warfare – machine guns, tanks, and aeroplanes.  In addition to this modern technology, millions of animals were used both in warfare and on the home front. They died in their hundreds of thousands.

An estimated six million horses and mules were engaged by the combatants.  They hauled food, equipment, ammunition and other supplies for the troops.  Tens of thousands of horses and camels were used by cavalry units.

Messenger pigeons played a vital role in communications, relaying messages from the front line to headquarters more reliably than telephone or radio.  Dogs carried messages and laid telephone wires. Cats caught rats in the trenches. Canaries and mice were employed to give early warning of toxic fumes when troops were tunnelling underground. On the home front, circus elephants were commandeered for agriculture and haulage.  Many animals – goats, a fox, monkeys, a pig, a bear, mice, dogs and cats – were kept as pets and mascots by troops and on ships, raising morale and providing comfort during the terrible hardships of war.

Here are 8 memorials that commemorate the history of animal contribution to the war effort.

In the 1920s, the RSPCA proposed a memorial to commemorate the animals that had served in the First World War.  Funds were raised and a site chosen at Hyde Park Corner. But the project stalled in 1925.

Instead, the RSPCA decided on a more practical commemoration – the Animal War Memorial Dispensary where, in the words of a contemporary report, ‘the sick, injured or unwanted animals of poor people could receive, free of charge, the best possible veterinary attention, or a painless death.’ Its central bronze relief depicts the working animals of the First World War and two stone tablets either side of the door are dedicated to the thousands of animals who died. The building is listed Grade II.

Blackie was one of many thousands of Royal Field Artillery (RFA) horses.  His rider was Lieutenant Leonard Comer Wall who had joined up at the outbreak of the war.  On 8 June 1917, during the Battle of Messines (2nd Battle of Ypres), they were both hit by flying shrapnel from a German shell.  Leonard was fatally injured.  Blackie recovered, although scarred, and served on the Western Front for the duration of the war.

When Lieutenant Wall’s will was read, it was discovered that he bequeathed his medals be buried with his horse.  He also asked that Blackie live out his days at the Horses’ Rest, Halewood.  Both requests were complied with.

Songster was mobilised along with other horses in Loughborough’s Market Place on 4 August 1914, the day Britain declared war on Germany.

Songster was taken to France with the Leicestershire Yeomanry in November 1914 and saw action with Trooper Bert Main in the saddle.

After the war, most horses were put up for sale in France because it was too expensive for the military to bring them home.  But Trooper Main raised enough money to bring Songster back to Leicestershire in 1919.

Songster spent his retirement years on a farm near Loughborough, cared for by Sgt. Major Harry Poole, and making weekly appearances at Loughborough Market.

Once a year Songster was reclaimed by his old unit, the Leicestershire Yeomantry, for their annual camp.  He died on 11 January 1940, aged 40 years, and was buried with his regimental medals.

In 1926, the Vicar of Saint Jude’s, Basil Bourchier, who as forces’ chaplain in the First World War had seen at first hand the suffering of horses, was offered a bronze of a war horse sculpted by Charles Lutyens – late father of Sir Edwin Lutyens, the architect of St Judes. The church purchased the bronze and commissioned an accompanying plaque and wooden plinth.   The memorial was unveiled 4 April 1926.

The Lutyens’ horse was later stolen, all that remains today of the original memorial is the plaque.

The Dickin medal was instituted by animal welfare pioneer, Maria Dickin in 1943 and since then there have been 65 recipients – 29 dogs, 32 messenger pigeons, 3 horses and one cat.

One such recipient was war horse Warrior, awarded ‘the Victoria Cross for animals’ posthumously on 2 September 2015. Warrior served for the whole of the First World War, surviving the battles of the Somme and Passchendaele. Despite injuries – Warrior was dubbed ‘the horse the Germans could not kill’ – he survived the war and returned home to the Isle of Wight in 1918 where he lived with his owner, General Jack Seely and family until he died in 1941, aged 32.The award was accepted by Brough Scott, grandson of General Seely, on behalf of all animals that served in the war.

The Animals in War memorial, Brook Gate, Park Lane, London was created by sculptor David Backhouse and unveiled by HRH The Princess Royal, November 2004. The main inscription reads: THIS MONUMENT IS DEDICATED TO ALL THE ANIMALS THAT SERVED AND DIED ALONGSIDE BRITISH AND ALLIED FORCES IN WARS AND CAMPAIGNS THROUGHOUT TIME.

Both sides in the First World War dug tunnels so they could explode mines under the enemy’s trenches.  The tunnellers took canaries and mice with them to give early warning of methane or carbon dioxide as the creatures were quickly affected by toxic gases.

Unveiled in 1936, the memorial commemorates the 20,000 pigeons killed in the war.  Lille was a mining area and a stronghold of pigeon fanciers. Money for the memorial was raised by the French Association of Pigeon Fanciers.