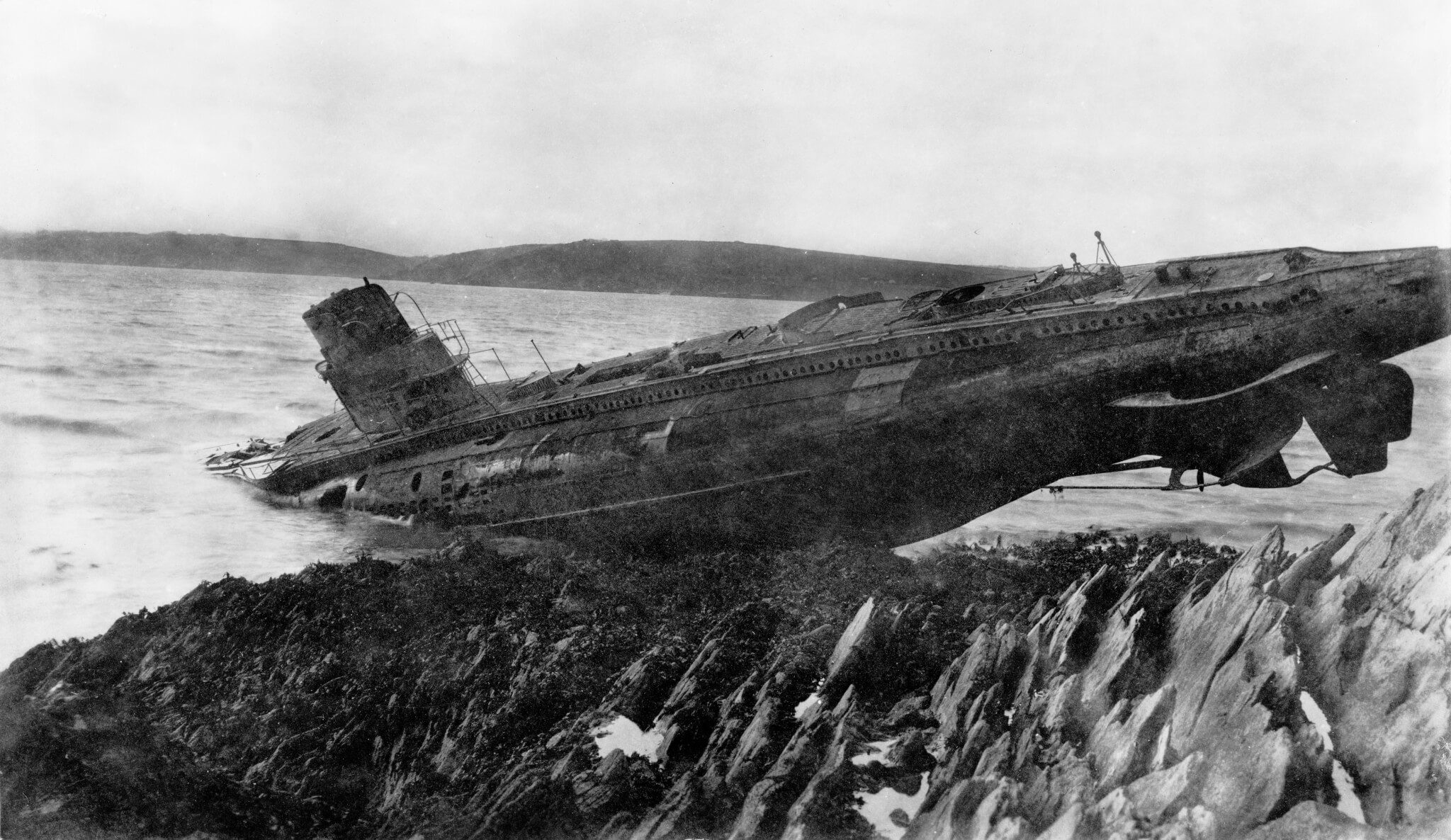 One hundred years ago today on 1 February 1917, Germany resumed its policy of ‘unrestricted submarine warfare.’  The seas around the British Isles were declared a war zone in which fishing vessels and unarmed merchant vessels, carrying essential items such as foodstuffs, coal and iron ore, would be attacked without warning by German U-boats.

Prior to this a U-boat would surface, search a vessel, give the crew time to take to lifeboats and then sink the vessel by gunfire or torpedo.  Now there were numerous indiscriminate deadly attacks, with ships sunk as soon as they were spotted.

By April, the Allies were suffering appalling losses. An average of 167 merchant ships were being sunk by U-boats every month.  By August 1917, 40,860 merchant seamen, fishermen and passengers, along with 4,696 ships had been lost.  Britain was near starvation with only 6 weeks of food left.  At one stage, only four days’ supply of sugar remained and a few weeks’ worth of flour.  Long queues in the shops and rising prices led to compulsory rationing in December 1917.

The German navy had initially introduced unrestricted submarine warfare early in 1915.  Britain was heavily reliant on foodstuffs and munitions carried across the Atlantic from Canada and neutral America in merchant ships.  Attacking these vessels offered huge opportunities for Germany to bring Britain to her knees through starvation, but brought with it the risk of America entering the war.

On 07 May 1915 the U-boat, U-20, torpedoed the British liner Lusitania off Ireland during its passage from New York to Liverpool.

Although the ship was later confirmed to be carrying munitions for the war effort, it was principally a passenger ship.  Of the 1,900 passengers and crew members on board, 1,198 died.  The sinking sent shock waves round the world and was used as a recruiting tool by the British government.

Among the dead were 128 Americans.  Outraged, the US President Woodrow Wilson demanded an end to German attacks against unarmed merchant ships.  Within four months – again for fear of America entering the war – the German government had imposed such strict constraints on U-boat operations that the German navy suspended the policy.

The Battle of Jutland (31 May/ 01June 1916) showed that the German Navy was not strong enough to defeat the Royal Navy in a head-on battle.

In the aftermath, German naval commanders argued for a more offensive use of submarines, claiming that the U-boat should become an essential component of their war strategy.  Germany’s U-boat fleet had been considerably enlarged in 1916 so there was confidence in the weapon’s potential for success and victory.

In addition, the sea-borne supply of coal and ore to the Allies for munitions manufacture could be seriously interrupted, and the poor wheat harvest of 1916,which was causing the Allies food shortages, could be made worse through U-boat attacks on trans-Atlantic food supplies.  There was also tremendous pressure from a hungry and frustrated German public. Unrestricted submarine warfare resumed on 01 February 1917.

Faced with terrible merchant shipping losses from resumed U-boat attacks, the British government finally decided, on 24 May 1917, to adopt the convoy system for merchant ships, with vessels sailing together, protected by Royal Navy destroyers.

When America entered the war 06 April 1917, partly as a consequence of the unrestricted submarine warfare strategy, the ultimate defeat of Germany became inevitable.

1. Well over 100 U-boats were surrendered to Britain following the Armistice in 1918. A programme of investigation, disposal, and recycling of components took place over the next few years. One form of disposal was as gunnery targets for the Royal Navy. In 1921 a group of six U-boats broke tow in a gale en route to being sunk in this way, and drove ashore near Falmouth. Here UB 106, photographed shortly after the event, lies half out of the water on the rocks, her propeller clearly visible. © Historic England/ Patrick Casement

6 comments on “Britain on the Brink of Starvation: Unrestricted Submarine Warfare”