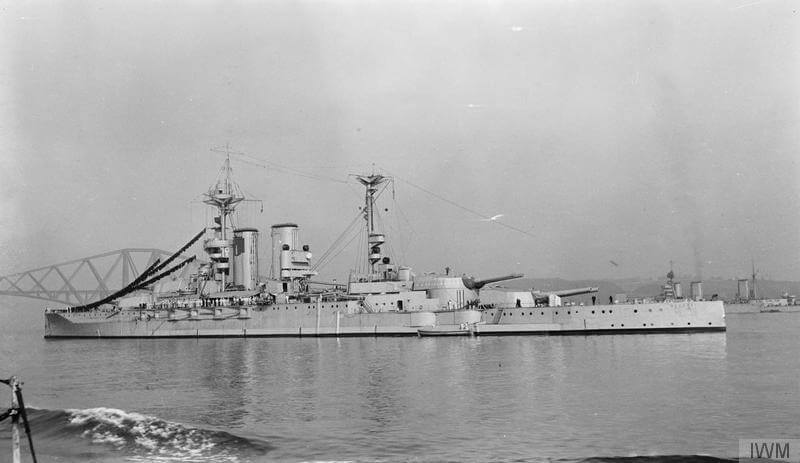 During the First World War, the British Navy dominated the sea, intercepting and detaining thousands of merchant ships carrying vital supplies bound for Germany and their allies. This month marks one hundred years since the British Royal Navy’s Grand Fleet and the Imperial German Navy’s High Seas Fleet met in the North Sea area west of Denmark’s Jutland Peninsula. What ensued was the largest naval battle of the First World War with over 100,000 sailors involved on 250 ships. More than 6,000 Royal Navy and 2,500 German sailors lost their lives.

Admiral Jellicoe and Vice-Admiral Beatty led the British fleet into the Battle of Jutland, and fourteen British warships sunk during the battle are now designated as protected places under the Protection of Military Remains Act 1986. These wrecks were surveyed by the Royal Navy last summer.

Two German cruisers and a battleship from the German High Seas Fleet are designated as scheduled monuments (Brummer, Cöln and König) having been scuttled in Scapa Flow in 1919 while the German destroyer V44, a lead boat in the 6th Torpedo-Boat Flotilla, was recently discovered lying in the mudflats in Portsmouth Harbour. Amazingly, five British warships that survived the battle also exist around our shores today, but only one remains afloat.

The HMS Caroline’s role in the Battle of Jutland was as part of a force intended to find the enemy fleet and report back on them. HMS Caroline survived the war and later became a depot ship in Belfast. She was decommissioned in 2011, having served as a training establishment for the Royal Naval Volunteer Reserve.

Under the care of the National Museum of the Royal Navy, HMS Caroline is now moored at Alexandra Dock in Belfast. She opens to the public on June 1 this year following an extensive restoration project.

HMS Falmouth formed part of the 3rd Light Cruiser Squadron, whose function was to screen Beatty’s battlecruiser fleet. Falmouth survived the battle, but later that year the Germans set a submarine trap off the Yorkshire coast, which the squadron ran into. Falmouth was damaged and sunk on 19 August off Skipsea, on the coast of the East Riding of Yorkshire.

HMS Monarch scored several hits to the German fleet at the Battle of Jutland, with no damage in return.

After being decommissioned in 1922, Monarch was towed out to the English Channel to be used as a target ship. She was sunk off the Isles of Scilly in 1925, some 33 nautical miles outside English territorial waters, after being used as a gunnery target by ships and aircraft.

HMS Nottingham formed part of the 2nd Light Cruiser Squadron whose function, like that of HMS Falmouth, was to screen Admiral Beatty’s  battlecruiser fleet.

At around 4.20pm on 31 May, the squadron signalled: ‘Have sighted enemy battle fleet bearing south east, course north.’ This signal allowed Beatty to attempt to lure the Germans to Jellicoe’s superior battle fleet lying some 65 miles to the north.

Nottingham was to survive the battle only to be later torpedoed and sunk by U-52 in the North Sea on 18 August 1916, 65 nautical miles north-east of Whitby.

HMS Warspite was a fast battleship in the 5th Battle Squadron under Admiral Beatty and sustained considerable punishment from the German battlecruisers. Nevertheless, she was able to engage the German battle cruisers König, Grosser Kurfürst, and Markgraf during the battle. Damage from a shell hitting the ship caused her steering to jam as she later attempted a turn, forcing her to go through two full circles in the water before regaining control. The wide circles caused her to head towards the enemy, and she drew much enemy fire which would otherwise have been directed at other British ships. She sustained 13 direct hits and continued with steering trouble, so she was ordered back to Rosyth and survived the battle.

She was decommissioned in 1945 and ran aground at Mounts Bay, Cornwall, in 1947 where she was dismantled over the next five years. Fragments of two boilers and hull plating from the wreck still lie there, while the remains of further boilers lie a short distance away.