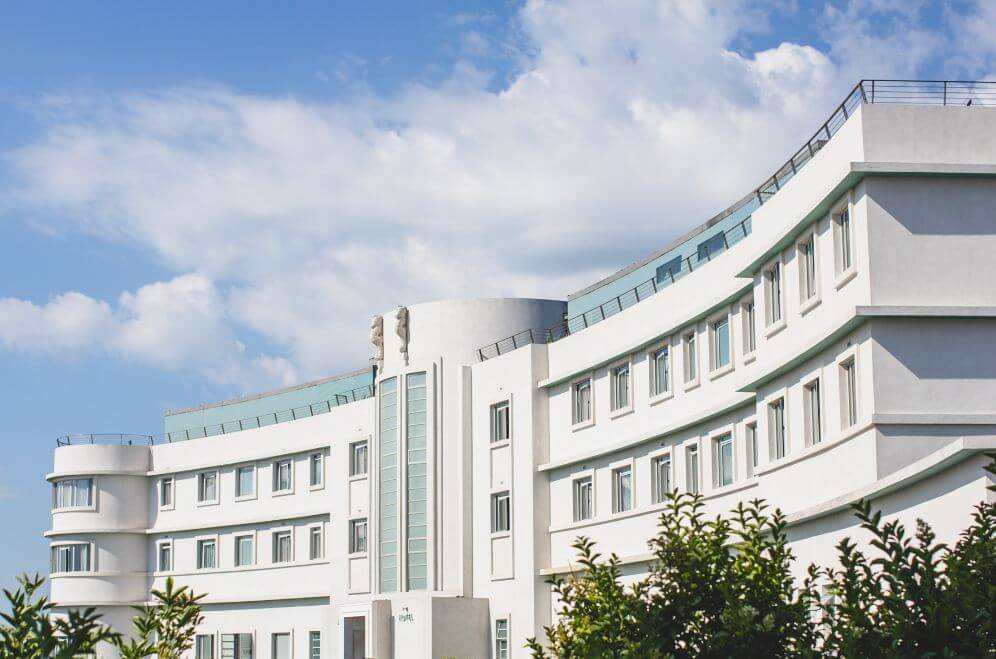 The 1930s saw a great diversity of architectural styles: from Neo-Georgian for town halls and mock Tudor for suburban semis, to ‘anything goes’ for the latest cinemas.

But the seaside was the setting for some of Britain’s first and finest ventures into Modernism, a new movement that espoused the benefits of sunshine, simplicity and space.

Here are six of the finest examples of Modernism at the English seaside:

Designed by Oliver Hill, one of the England’s most eclectic Twentieth Century designers, the Grade II* Midland Hotel was built in the Streamline Moderne style and opened in 1933. It was commissioned by the London Midland and Scottish Railway to lure holidaymakers to Lancashire and features sculptures and reliefs by Eric Gill, and murals by Eric Ravilious and his Tirzah Garwood.

A year later in 1934, Hill was appointed chief architect on an ambitious project in coastal Essex. The Frinton Park Estate was originally intended to include over 1,000 houses as well as civic and social buildings.  Hill designed several himself, but also encouraged young architects to submit ideas, including Wells Coates (of Embassy Court), Erich Mendelsohn and Serge Chermayeff (of The De la Warr Pavilion) and Maxwell Fry. The project fell into difficulty with issues arising from the budget and materials, and now only 40 houses remain.  This figure includes the former show house, which contains a sweeping staircase and patterned floor reminiscent of the Midland Hotel but on a more domestic scale.

In the 1920s, Herbrand Sackville, the Earl De La Warr became the first hereditary peer to join the Labour Party.  He was motivated by strong left wing convictions, and in 1934 prompted Bexhill Council to launch a competition for a new public building in the town. The brief stated that ‘no restrictions as to style of architecture…but buildings must be simple, light in appearance and attractive…Heavy stonework is not desirable.’  It was De La Warr’s hope that Bexhill would become a resort to rival neighbouring Brighton and Eastbourne.

The winning design came from the German Jewish Erich Mendelsohn and the Russian Jewish Serge Chermayeff, whose sleek and luxurious Modernist design was completed in 1936 and Listed at Grade I in 1971.  However the pavilion was built along strictly socialist principles: purely for public use, it balances serious modern architecture with fun, and stamped official authority on an emerging architectural style new to England.

A year after the opening of the Lawn Road Flats, the Canadian architect Wells Coates completed a second modernist block on the coast.  However, Embassy Court was quite different to its London cousin: instead of being an experimental, more communal style of living, it offered pure luxury and was intended specifically for the wealthy.  At the top of the 12 storey block on Brighton’s Kings Road, was England’s first penthouse apartment, and heavily promoted was the amount of sunlight available in each of the flats, and the ‘oceans of ozone’ that could be found on its rooftop sun terraces.

Located on the Saltdean Estate in Sussex in 1938, the Lido stood out amongst its neighbours – mostly early 20th Century houses built in Tudor, Spanish and Italian styles.  Designed by RWH Jones, the lido faces the ocean and featured a salt water pool and space for up to 500 bathers, and is the most spectacular of a crop of open-air pools built in areas where the coast was rocky or dangerous.  However after just two years, and due to the outbreak of the Second World War, the Lido was closed.  The following decades saw it go in and out of use, but restoration work has begun on the building, with the intention of reopening it.

Inspired by New York’s Coney Island, the Pleasure Beach at Blackpool was founded in 1905, receiving over three million visitors in its first year. Initially a rather ramshackle affair aesthetically, efforts were made to consolidate the design and create uniformity in the 1930s.  The architect Joseph Emberton was hired in 1933 and worked throughout the decade on a series of modernist buildings, for the site.

The architect-engineer Wells Wintemute Coates (1895-1958) numbers amongst the most significant figures in the history of 20th-century British architecture. Richly illustrated with drawings from the office archives, plus new photography, this book re-introduces Coates to a modern audience.

3 comments on “Modernism at the Seaside”