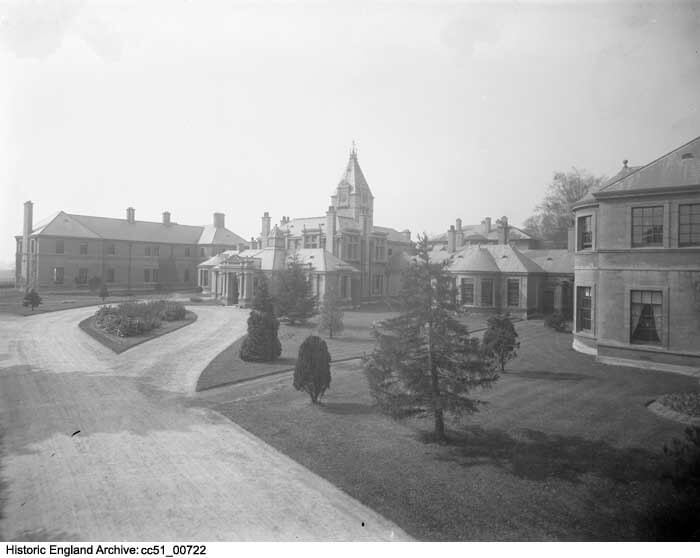 For centuries, mental illness was regarded as a spiritual affliction rather than a medical one; thankfully social attitudes have changed. The treatment of people with mental illness can be traced through the institutions that cared for them, some of which provide us with a fascinating insight into medical history. The concept of an asylum now is outdated, and many former institutions have been repurposed numerous times since their inception in the early 19th century, but those with special architectural interest or that made a significant contribution to medical science are protected by listing.

Private asylums built before 1845 are often given careful consideration for listing due to their rarity. One such example, Warneford Hospital, built c1821 was intended for ‘non-pauper’ patients who were split into three classes and would pay for treatment according to their financial circumstances. Early 19th century asylums were often constructed in a rural setting, as exposure to the outdoors was considered to be of great comfort to patients. The construction of Wareham Hospital is said to have aimed to recreate the atmosphere of a gentleman’s country house. The site is still used as a hospital, albeit with extensive expansion.

A second notable surviving example, Brislington House (c1804) was the first private asylum, with deliberately laid out grounds. The list entry for this property states that it was constructed by Dr EL Fox ‘to pioneer the humane treatment of the insane’. The therapeutic regimes, including the use of plunge baths, informed developing practices in other institutions. The hospital was not absorbed into the National Health Service formation of 1948, instead serving as a nurse’s home and then care home until it was converted into luxury flats.

Prior to the construction of the Royal Earlswood Hospital (Grade II listed), people with learning disabilities were housed in asylums for the mentally ill. Rev Dr Andrew Reed proposed that patients could be trained to lead relatively normal lives in the outside world, and thus the hospital was constructed as the first in the British Isles to cater specifically for these patients. Patients were taught manual trades such as carpentry and painting, as well as how to care for themselves. The hospital closed in 1997 following the Government reform to place people with learning disabilities into the care of the community, and was converted into apartments.

In the mid-19th century the County Asylums Act and Lunacy Act (1845) required that every United Kingdom County should build an asylum. Due to the increase in numbers of these structures (by 1888, 85 had been built), protection by listing is dependent largely on architectural interest. The Hampshire provision, Knowle Hospital’s unique architecture included a large chapel constructed out of the local (Fareham red) bricks. The hospital closed in 1996 and since 2000 has been redeveloped as apartments, an expansion of the village of Knowle.

Do you know about a listed former asylum or healthcare institute?

The List started its life in 1882, when the first powers of protection were established. It includes buildings, ancient monuments, shipwrecks, parks, gardens and battlefields. This year, for the first time in history, we are inviting the public to join us in keeping the List rich, relevant and up-to-date. We are opening it up and asking people and community groups across England to share their knowledge and pictures, so we can record important facts about places, and even unlock the secrets of some. Many places and buildings on the list are well-known and even world-famous. But in some cases there is much that remains unknown. That’s why we need your help – so we can share images, insights and secrets of England’s special places, and capture them for future generations.

Perhaps you live in a former asylum or healthcare institution building, or you know of one locally to you which may have been given listed status. If you’d like to share your knowledge or photos please find out more at HistoricEngland.org.uk/etl.