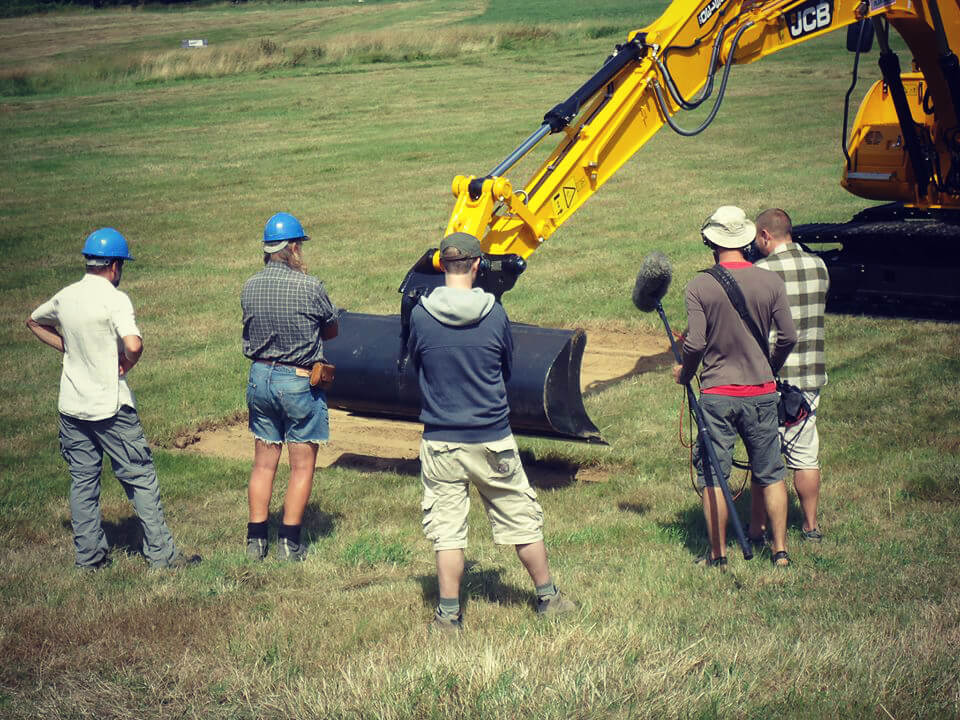 Last night’s Time Team aired on Channel 4 and apart from cringing at the prospect of watching myself on TV, I was very keen to see it. Earlier this year, we were approached by Time Team to make a programme about the Battle of Hastings and we welcomed this opportunity to further our understanding of the abbey and battlefield.

It was agreed to dig three trenches on the fields below Battle Abbey under the supervision of Dr Glenn Foard of the University of Huddersfield, a leading battlefields archaeologist. The topsoil would be removed and the ground beneath subject to careful investigation using metal detectors to look for archaeology from 1066. This work would allow us to build on a pilot scheme undertaken by Glenn in 2011.

Time Team’s excavation revealed no battlefield archaeology, but their landscape analysis and LiDAR survey produced some really interesting results. It suggested that a focus of the fighting was about 200 metres east of the later abbey church, at the junction of Upper Lake and Lower Lake, with William’s army having approached from the southeast. In the pursuit of ‘ground-breaking’ TV, Time Team interpreted this evidence as proof of a new site for the Battle of Hastings, even though this area is already understood by historians to have been part of the battlefield. [1]

What is interesting about Time Team’s landscape analysis is that it suggests that a particular part of the traditional battlefield was the focus of the action and that holding this ground may have been critical to either army. It also strongly affirms the defensibility of the ridge on which Battle Abbey was later built. Within living memory of the battle the abbey was described as being constructed on the site of the conflict, with the Anglo-Saxon Chronicle saying ‘On the very spot where God granted him [William] the conquest of England he caused a great abbey to be built; and settled monks in it and richly endowed it.’[2] Early 12th-century sources tell us more specifically that the abbey church was built at the point where Harold’s body had been found after the battle.[3] The east end of the abbey’s church stood at the top of the ridge, giving a commanding position over the area, only about 200 metres away from the junction of Upper Lake and Lower Lake.

We know from early sources that Harold’s standard was placed at the summit of the hill on which the battle was fought, a point which perfectly describes the relationship between the location of the abbey church and the ground to the east.[4] Time Team’s work therefore reinforces the notion suggested by the historical sources that the abbey was founded not only on the site of the battlefield but also at the point where Harold raised his standard, a location which by the early 12th century was increasingly regarded as the place where Harold had been killed.

If William’s army approached from the southeast, it means that much of the land south and southeast of the abbey church in the guardianship of English Heritage would have been contested by the left flank of William’s army and the right flank of Harold’s. In the valley directly south of the abbey, the LiDAR survey showed suggestions of former streams, not a surprise given that the monks of Battle Abbey later created three fishponds in this landscape, but interesting in the context of a scene in the Bayeux Tapestry. This appears to show an episode of fighting between the opposing forces within a marshy area, which may be a reflection of the conditions found on this area of the battlefield, rather than a fantastical flourish as some have previously thought.

Landscape analysis in itself does not prove where the action of the Battle of Hastings took place but it does give pointers as to how the Saxon army may have taken advantage of the natural features of the landscape at Battle to protect itself and to make the advance of William’s army as difficult as possible. The defensive qualities of the Battle ridge also suggest that this position was deliberately chosen by Harold. It has long been understood that the battle’s action ranged across an area of land beyond the boundaries of the parkland south of the abbey, with the Saxon retreat, for example, almost certainly being along the line on which Battle High Street was later laid out.

Rather than finding a new site for the battle, Time Team’s work is a useful addition to our collective understanding of the physical constraints within which the opposing Norman and Saxon armies met each other in 1066. These insights may help to explain some of the peculiarities of the Battle of Hastings as described in historical sources and when it comes to revising our interpretation at Battle Abbey (which we do regularly at all our sites), we will certainly include them. The new work also reinforces the centrality of the abbey’s location in relation to the fighting, buttressing the information provided by the historical sources. At a commanding position overlooking the battle, the location at which the abbey was founded would have made an obvious point for Harold to place his standard.

Roy Porter is a Properties Curator for English Heritage. He plays a lead role in the conservation management of some of England’s most popular and iconic historic properties including Dover Castle, 1066 Battle of Hastings, Abbey and Battlefield and Osborne, where he is currently involved with a major conservation and re-interpretation project at the Swiss Cottage.  Roy is a graduate of Oxford University and prior to joining English Heritage in 2007, spent five years as a Casework Officer at the Advisory Board for Redundant Churches.

9 comments on “A new site for the Battle of Hastings?”