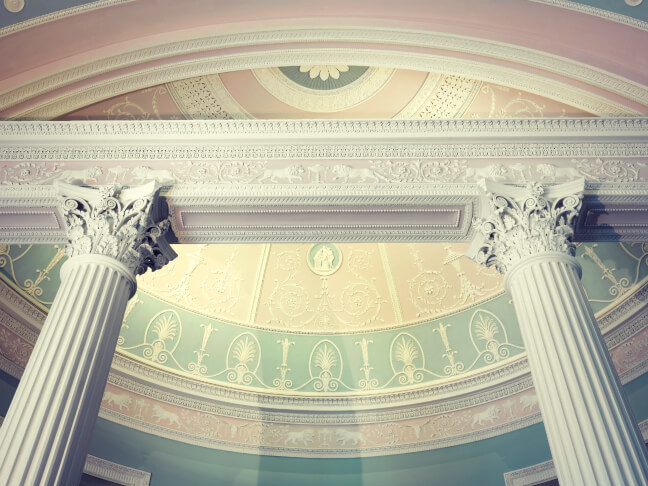 It all started with a phone call. The caller was Ian Crick-Smith of Lincoln University, an expert on the decoration of historic houses who’s worked with English Heritage for many years. In preparation for much needed repairs and improvements at Kenwood House, we had commissioned research into the decorative finishes of the outside and some of the ground-floor interior rooms. What Ian had to tell me was something too serious to ignore: one of the most famous rooms in England was painted the wrong colour.

Kenwood House is among the most important and complicated buildings anyone could wish to work on. It’s well-known to generations of Londoners for its beautiful grounds and its magnificent collection, including paintings by Gainsborough, Rembrandt and Vermeer. But Kenwood is also an acknowledged masterpiece of 18th-century architecture, and one of its set pieces stands out: the Great Room, or Library, built and decorated in the 1760s by Robert Adam. The Adam Library appears in hundreds of books: it’s famous enough to be on the back cover of the North London volume of ‘Pevsner’, the bible of English architecture.

Ian and his colleagues had taken 199 samples of historic paint from the library’s walls (this later swelled to over 400), showing that the room had been decorated nine times in its history, most recently in the 1960s. Sampling confirmed what we already knew, that the restorers in the 1960s had been trying to re-create the room’s appearance when newly built. Analysis has become more sophisticated since then, so it wasn’t surprising that some of the shades of blues and pinks had been slightly off the mark (usually bolder than Adam’s original tones).

But there was one horrible problem – much of the present richness of the room comes from gilded ornamentation: on the frieze of the cornice, the capitals and bases of the columns, and on the panelling of the ceiling. Some of Adam’s surviving drawings of the library showed gilding in these areas, and people had naturally assumed that the gilding was Adam’s. Ian’s discovery was one of those things that ought to make a curator’s life rich and interesting, but actually it would be simpler not to know. The gilding was indeed historic, but it wasn’t original. Specifically, it was added as ‘phase 2’, over features that were consistently painted white by Adam in the first phase.

Unfortunately, paint analysis by itself can’t tell you the date when something happened – it can only tell you that phase 2 came after phase 1. And here was the thorniest problem: there wasn’t a phase 3, or 4, but the gilding had survived all the way down to the present day. The best guess was that it was added in the 1790s, making its survival rather precious. But inconveniently I had already begun to plan for the restoration of Adam’s original scheme, so this late 18th-century gilding was definitely in the way.

Several things could have happened next, and each of them had their supporters in the arguments that followed:

In the end, we’ve chosen 4, but only after long arguments, and equally important, finding a method of making sure that if future curators think we’ve chosen badly, they can uncover the gilding without damage. We finally decided that we wanted to reveal a masterpiece of design in its true colours, and the finished product has lived up to expectations: it has a much more subtle palette of blues, greens and greys, in a framework of delicate white plasterwork that seems to unite the elements rather than divide them. Of the few people who’ve seen it, several have noticed a similarity to Wedgwood ceramics, which is appealing. As an expert in Robert Adam said, encouragingly, ‘we’re all going to have to see Adam in a new light, and that’s a good thing.’ I hope lots more people will agree.

Jeremy Ashbee has worked at English Heritage since 2003 and for the last six years has been Head Properties Curator. He has had a particularly close involvement with English Heritage’s properties in London, and has taken a leading role in the very complex project to conserve and re-present Kenwood House in north London.

5 comments on “Painting Over a Masterpiece”