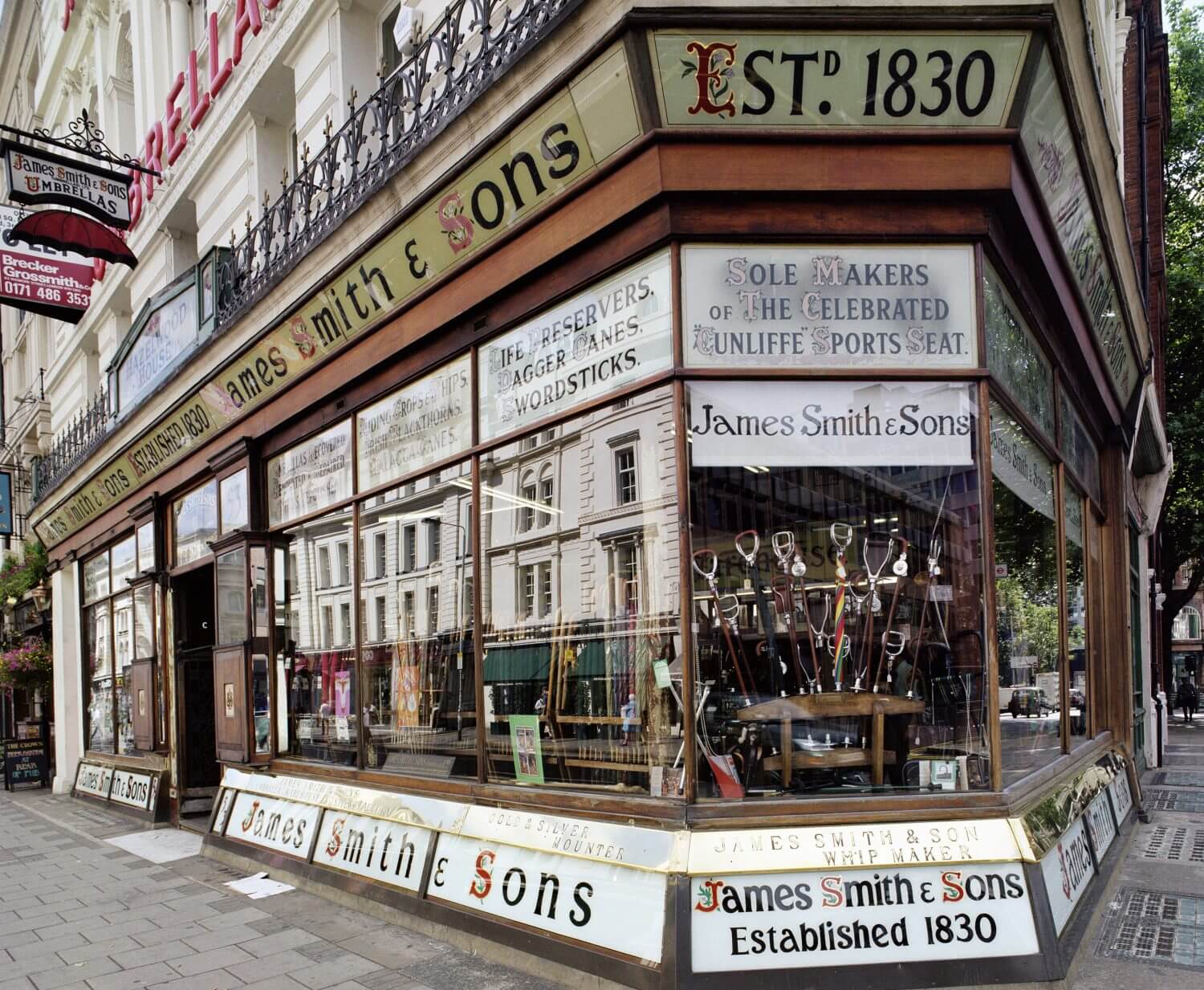 London streets are lined with colourful shops, clamouring for our attention. Many are of considerable age, and have survived for our enjoyment only through careful maintenance by generations of shopkeepers.

Kathryn Morrison, Head of Historic Places Investigation, selects eight shopfronts that can be appreciated by anyone strolling along the pavements of London, and offer a glimpse into the city’s rich history as one of the world’s most exciting shopping centres. Presented chronologically, these shopfronts show how our shopping streets have changed over the centuries.

No.56 Artillery Lane in Spitalfields will be unknown to many seasoned London shoppers. It lies far from the West End, in a warren of small streets and passages that evoke Dickensian London despite the proximity of Liverpool Street Station. Now an art exhibition centre, this building was probably erected in the 1720s for a Huguenot silk merchant. Around 1756 it was refronted and the present shopfront – one of the oldest in London – installed. The flattened bow windows are characteristic of the period.

In the 1750s this shop may have belonged to the silk mercer Francis Rybot (Ribault), who leased the property from another mercer of French extraction, Nicholas Jourdain.

Throughout the 18th century the shop was known by ‘the sign of the cat’. It was a grocer’s shop from 1813 until 1935. Today, recognised as the finest mid-Georgian shopfront in the city, it is listed Grade I. The shopfront next door, at No. 58 Artillery Lane, is also worth a look: it dates from the early 19th century and is Grade II listed.

This lovely late 18th-century shopfront, with its prominent bow windows, small panes and narrow glazing bars, can be found just south of Piccadilly Circus. It is a remarkable and surprising survival in a street that has witnessed extensive redevelopment over the centuries.

Until 1982 the premises were occupied by the tobacco and snuff dealer, Fribourg & Treyer. One of their signs is still set into a window pane. Peter Fribourg, the founder, was at this address in 1751, but the shopfront seems slightly later in date. It is worth popping inside to see the remaining Georgian fixtures and fittings, including an Adam-style screen. The shop is listed Grade II*.

Under various guises – Bourne, Pickering and then Berry – the same firm has traded here, in the heart of London’s ‘Clubland’, since 1698. It was originally a grocer’s shop and, until street numbering was introduced, the address was ‘at the sign of the coffee mill’. A modern version of the coffee mill sign still hangs outside the shop, but by the mid-19th century Berry Bros & Rudd had become a specialist wine and spirit dealer, as it remains today.

The venerable arcaded shopfront was installed around 1800. Note the elegant glazing, with very slender bars, and the pleasingly battered panelling with its blistered paintwork. The old wooden shutters still line the passage, Pickering Place, to the side of the shop. The premises are listed Grade II*.

This world famous jeweler’s shop was founded by William Asprey in 1781 and moved to No. 166 New Bond Street in 1847. Over the years, as the business grew, it spread into neighbouring buildings. Asprey’s is listed, Grade II.

Though modernised in recent years, No. 166 (the middle section of Asprey’s, now identified as ‘167’) is a rare example of a fashionable mid-Victorian shopfront. Unlike its modest Georgian predecessor, it reaches up to the sills of the second-floor windows, encompassing a mezzanine floor. The central doorway and windows are flanked by barley-twist columns, and the huge panes of plate glass proclaim the wealth and status of the retailer – compare them with the windows of Berry Bros & Rudd, above.

The matching shopfronts to either side (Nos. 165 and 167) date from around 1906 and have also been modernised. You have to look closely to notice differences in the design, for example the use of fluted rather than spiral columns. Although Asprey’s shopfront expanded over many decades, it is visually unified by the cresting which runs along the top.

Lying close to the British Museum in Bloomsbury, this supreme example of mid-to-late Victorian shop lettering is listed Grade II*.  Neighbouring business premises once had similarly brazen displays of signage, but this is the only one to survive. You have to raise your eyes above the shopfront to appreciate the full effect.

James Smith & Sons specialises in umbrellas and walking sticks, which are still made in the basement under the shop. It was established in Foubert Street in 1830 but this branch opened in 1867. The building, Hazelwood House, was remodeled when Shaftesbury Avenue was created around 1880, and the shopfront probably dates from that time. It is typical of the age, making use of all available surfaces – some of them carefully restored – for advertising purposes, and topped by decorative Gothic-style iron cresting.

John Cording’s first shop, specialising in gentlemen’s outerwear, opened on the Strand in 1839 and moved to No. 19 Piccadilly in 1877. The present building, including the shopfront, was designed by Harold Arthur Woodington and erected in 1903.

Step to the opposite side of the street and you will see that this building rudely interrupts Norman Shaw’s heroic architectural scheme of the early 20th century, with the Piccadilly Hotel to the left and the former Swan & Edgar store to the right. The only concession made by the owners of Denman House to Shaw’s plans was to set back their façade, re-erecting it to align with the new hotel.

This architectural compromise was deplored at the time as ‘a hopeless blunder’. But it has preserved a wonderful shopfront, of fine materials and exquisite detailing, which perfectly suits the building it occupies. The building is listed, Grade II.

François Pinet was a successful French shoe manufacturer, with a fashionable shop on the Boulevard de la Madeleine in Paris. The firm probably occupied this shop as its London branch from the time of its construction in 1906. The architect of the building was William Flockhart, but close inspection of the window sill reveals the name of the Parisian architect who designed Pinet’s shopfront: ‘Avg Waser’ (Auguste Waser).

An unusual and particularly ingenious aspect of this shopfront is the device of the picture frame. Ornate bronze frames are embedded in the plate-glass windows, beautifully showcasing displays of Pinet’s shoes. The shopfitters must have been highly skilled craftsmen.

The sleek, stylish shopfront of this former umbrella shop survives, although the premises were converted into a wine bar in 2015. Fox’s business, manufacturing and selling umbrellas, was established in 1868, and the shop was refurbished in 1937 by E. Pollard & Co., one of the main shopfitters of the day.

Fox’s stylistic approach was very different to that of rival umbrella manufacturers and retailers, James Smith & Sons (see above), who chose to retain their traditional frontage for generations. The combination of bright chrome trim, shiny black Vitrolite (opaque glass) and red neon lettering were the height of modernity in the 1930s – and remain so today.

The concave non-reflective glass in the display windows is worth a special look. These windows were designed by Pollard’s to eliminate reflections that might affect the visibility of displays. They were expensive: very few were made and a mere handful survive today. One other fine example can be seen at Waterstone’s (formerly Simpson) on Piccadilly. Fox’s is listed, Grade II.