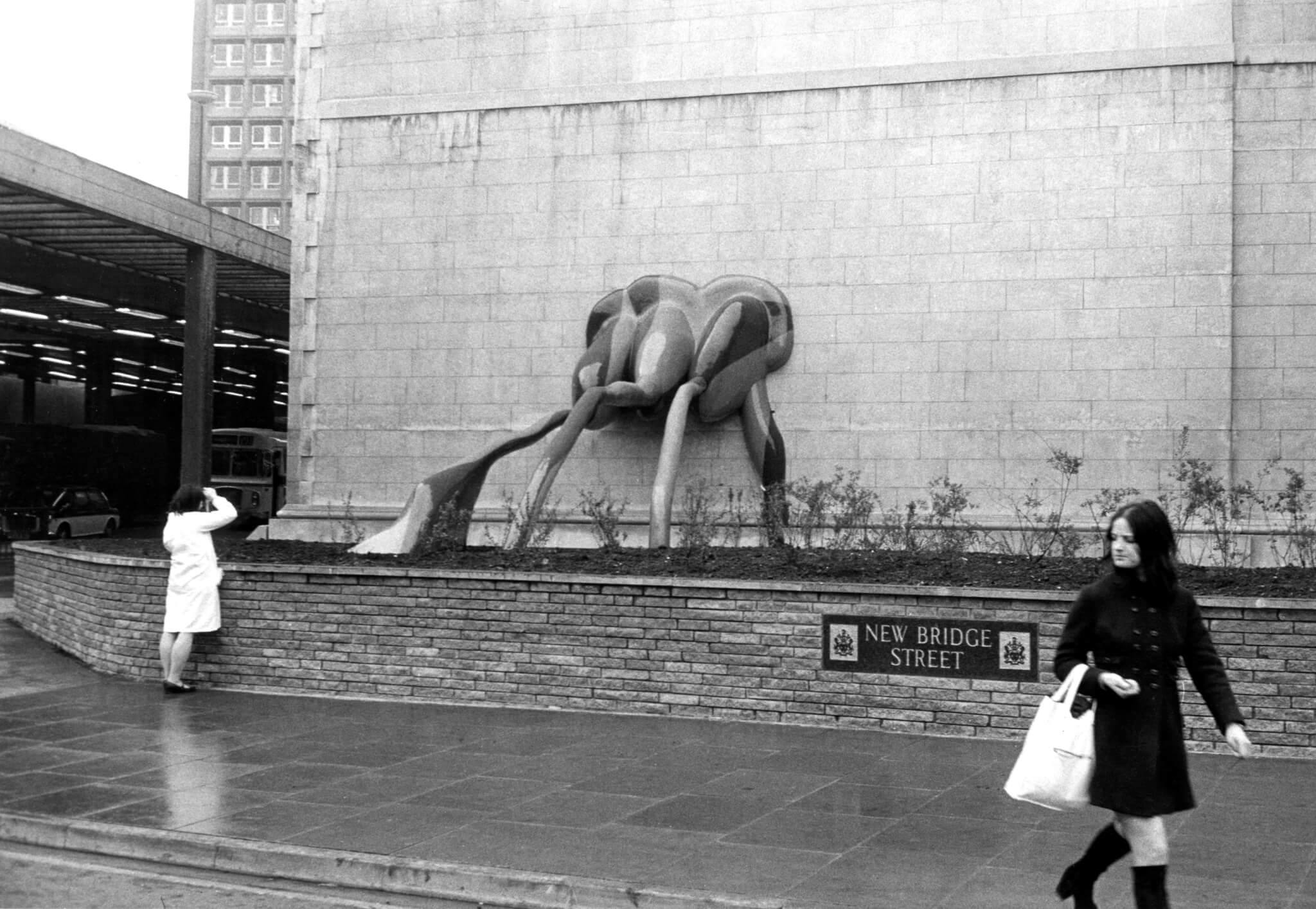 The Angel of the North may be Newcastle-Gateshead’s (and probably the UK’s) most well known public artwork but the city has a much longer history of public art making, going back at least to the early 1960s.

Our free exhibition, Out There: Our Post-War Public Art, explores the  significance of structures created by pioneering artists between 1945 and 1985. 8 September to 23 December 2016, Bessie Surtees House.

Rebecca Farley, researcher in Media, Culture, Heritage at Newcastle University, takes us through six artworks that represent a changing profile of public art activity in the city.

Geoffrey Clarke’s 1962 sculpture sits in a quiet quadrangle within the Newcastle University city centre campus. It was commissioned by architect Sir Basil Spence as part of his design of the University’s new Herschel Building. Spiral Nebula was Spence’s third collaboration with Clarke, an innovative and much sought-after artist of his day, who had previously created works for Coventry Cathedral and Spence’s Physics Building at Liverpool University. After falling into serious disrepair over the years, Spiral Nebula was restored by the sculptor’s son Jonathan Clarke in 2013 as part of the university’s campus improvement programme.

1970s: Newcastle Through the Ages

This mural, completed in 1974, forms part of the sidewall of the former BHS store (now Primark) just off Newcastle’s main shopping street. It was created by the artist partnership of Henry Collins and Joyce Pallot, who were in high demand for their concrete relief work in the post-war period. Very much fitting with the fashion for illustrative murals at this time, the work is full of familiar landmarks and local cultural references including a typical representation of a ‘Geordie’ miner. Newcastle Through the Ages was one of sixty commissions undertaken by Collins and Pallot across the UK.  Although several examples of their work still exist in London and the south this is the only surviving Collins and Pallot’ mural in northeast England.

Mike Winston’s sculpture was made onsite on West Street, Gateshead in 1986, while Winston was the town’s official ‘sculptor in residence’. It was carved from massive block of polystyrene that was then covered in a skin of concrete. Now a solid matt black the sculpture was originally painted in rainbow colours. The work is a celebration of the fun and excitement of a school sports day, bringing together the image of a giant competing in a sack race with animal figures taken from the fable of the tortoise and the hare. Sports Day has long been a controversial artwork, reportedly being attacked by vandals during its construction phase back in the 1980s. The sculpture still has the power to divide popular opinion in Gateshead today.

This quayside folly from 1998, designed by Raf Fulcher, is one of a group of public artworks commissioned as part of the transformation of Newcastle Quayside in the late 1990s. The structure is full of references to the river and to the shipping and trade emanating from the Tyne in the 19th and early 20th centuries. The city names inscribed in the pavilion’s roof reference the northern shipping routes once run from Newcastle and Middlesbrough by the Tyne-Tees Shipping Company. Although it now looks over a rather different riverscape from that of the late ‘90s, (The Sage Gateshead and the Millennium Bridge, being newer architectural additions), Fulcher’s Pavilion is still a prominent landmark on the Newcastle Quayside. Today it also often serves a practical use as an impromptu outdoor coffee shop.

Inserted into the paving in the pedestrianized entrance to Thornton Street in Newcastle, this is probably one of the most walked over, but most unnoticed, public artworks in the city. The work is a 140 metre-long introduction to northeast history written in the form of a collaged poem. Following the line you encounter extracts from the Roman Vindolanda Tablets and the Lindisfarne Gospels, interspersed with a series of text messages from the day of the 2004 football derby match between Newcastle and Sunderland. The whole text is illustrated with specially invented ‘emoticons’. Tyne Line of Text Flow is a collaborative work by poet W.N. Herbert and artists Carol Sommer and Sue Downing. It was installed in 2005, as part of an ambitious programme of public art commissioning generated by the Grainger Town Project.

Completed in 2014, Halo is one of the most recent public artworks to be sited in the city. Commissioned by Spen Hill Developments in partnership with Gateshead Council it sits as the visual centrepiece of Gateshead’s new Trinity Square. The sculpture, a huge steel ring that stands slightly tilted out from the pavement, is constructed from a series of inflated stainless steel pillows. Created using a patented method devised by local artist Stephen Newby and fabricated by a company in nearly Ryton, the sculpture has been highlighted locally as something of a celebration of northeast creative and engineering talent. Meanwhile the artwork’s title has led some people to imaginatively speculate that the sculpture might be a ‘lost’ halo that has rolled away from The Angel of the North.

Out There: Our Post-War Public Art is at Bessie Surtees House, Newcastle upon Tyne, 8 September to 23 December 2016.

Use code BLOG16 to get 20% off any book from the Historic England bookshop.