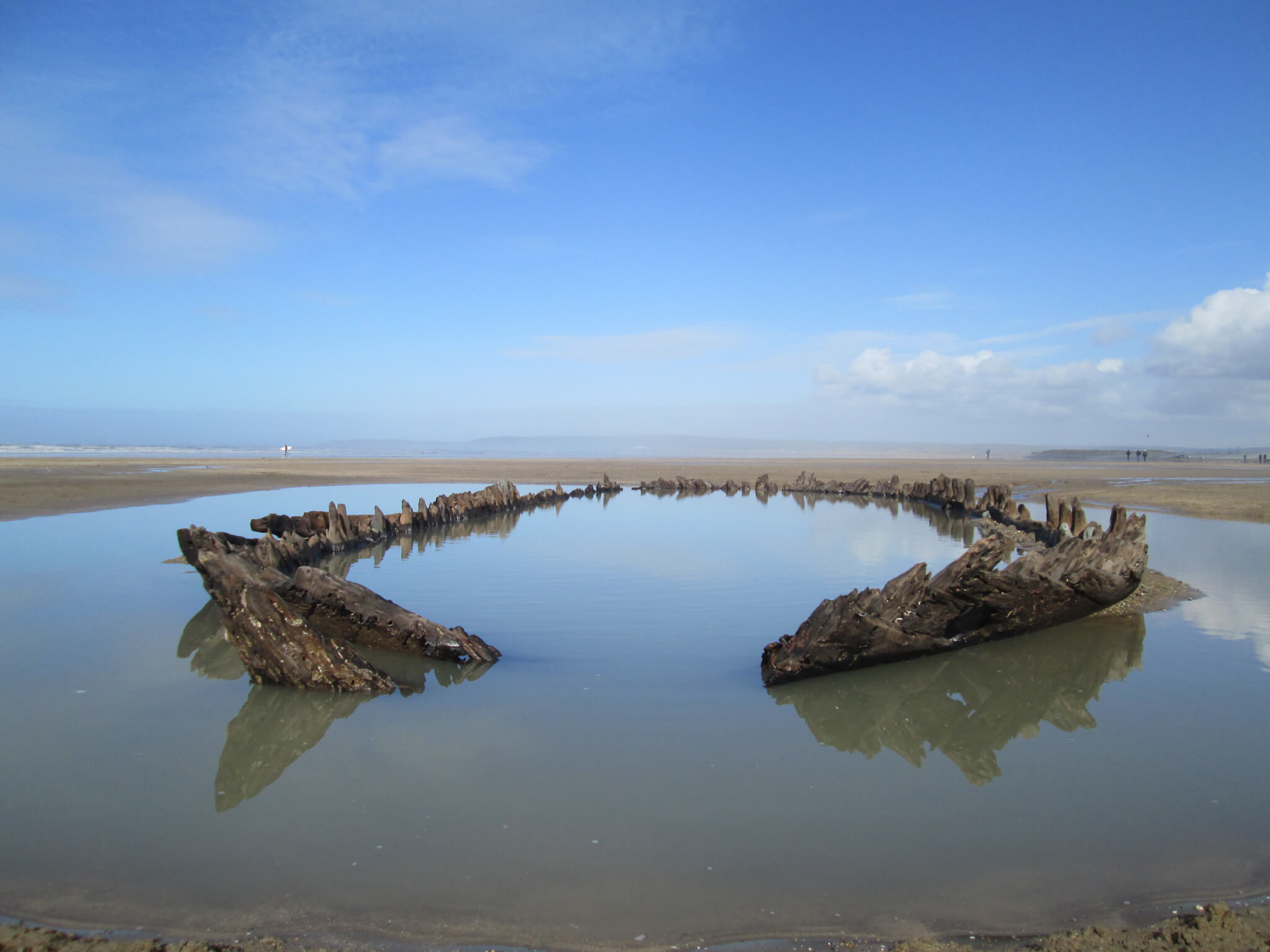 Shipwrecks don’t just happen in the deep sea: many ships are driven ashore or lie slowly decaying along riverbanks, estuaries, and creeks. The Department for Culture, Media and Sport has given protection to three such ‘shoreline’ wrecks on Historic England’s recommendation. For all three, one of the major factors in assessing their national significance for protection was their rarity. Generally speaking, the further back we go in time, the rarer the evidence is for shipwrecks around England’s coasts.

So just how rare are the wrecks?

This vessel was first found buried in the mud in the River Axe at Axmouth in 2011. Sampling of the timbers suggested that it was constructed between 1400 and 1640. It is carvel-built (planks laid edge-to-edge) with oak treenails or fastenings, with a ‘crook’d floor’, a single Y-shaped timber forming the lowermost framing of the vessel structure. It is believed to be the remains of a coasting or fishing vessel of around 70 tons.

We know of 565 wrecks for this 240 year period for the whole of England and there will have been many more lost to history. Many written records have not survived (for instance, many monasteries had rights to wreck cast ashore, but their records did not survive the Dissolution of the Monasteries in the 1540s).

The wrecks we know about from documentary evidence outnumber actual wreck sites for this period by about 25 to 1 and there will have been many more wreck events lost to us, so the true ratio is far higher. Only 23 surviving sites of this date have so far been found, of which 14 others have been given heritage protection, including the Mary Rose.

The remains of a wooden sailing vessel 23m long by 7m wide lie on the beach, well settled into the sands. It has been exposed and reburied many times over the years, and most recently following winter storms in early 2014. It lies on an even keel, is fastened with treenails (timber fastenings) rather than metal bolts and lies with its stern (or after part) first onto the beach. It’s possible identity is that of the Sally,  lost in 1769 when it ‘struck aft’ on the beach while bound for Bristol, with port wine from Oporto.

By comparison with records at the time of the Axe Boat, as Britain’s commercial and naval ambitions expanded, more records were made and more evidence survives of wrecks that occurred around the time the Sally was lost. Shipping news was therefore of great importance to the local newspapers that started to appear in the early 1700s, while from 1740 onwards Lloyd’s List (one of the world’s oldest continuously running journals) was devoted entirely to ship news: arrivals, departures, and disasters.

With almost 11,000 wrecks, this period alone accounts for almost one third of all known wreck events documented in England, but only 40 have been found, of which seven others have been given protection. All the others are naval or other significant vessels such as those belonging to the East India Company. It is rare indeed to find a less ‘important’ vessel, and even rarer to find one for which we can suggest a name.

North of the wreck at Westward Ho!, is a similar but smaller wooden sailing vessel, approximately 17 metres long. It uncovers less often than the larger vessel and for shorter periods of time. We do not know how wide it is because only one side is visible, at such an angle that the wreck probably drove ashore in a storm. Enough of the side is visible to suggest that it was probably a Severn trow, a form of local cargo-carrying vessel, lost around 200 years ago.

The Severn trow was once a common sight in the Bristol Channel and Severn Estuary, like the many other types of local ships once seen in England’s rivers and estuaries. For example, the collier brig was once ubiquitous on England’s east coast but only one example is known to survive, in the form of the wreck at Seaton Carew, near Hartlepool.

Such vessels were very long-lived in two ways: they often worked for many decades and they changed little over the centuries, being well-adapted to their local conditions. Many continued in use until the 20th century, when they were no longer economic to run or repair and were frequently abandoned at the edges of the waterways they once served.

The Severn trow is sometimes found in this way as an abandoned hulk of much later date. To find one lost as a wreck in a storm instead is rare. Its location on Devon’s north coast also reveals that it is rare evidence of a time when the Severn trow was beginning to be used as a seagoing vessel, outside its traditional area of the River Severn – a real time capsule.

For more information on the wreck sites, take a look at the Historic England Wreck of the Week blog Newly Protected Wrecks in Devon