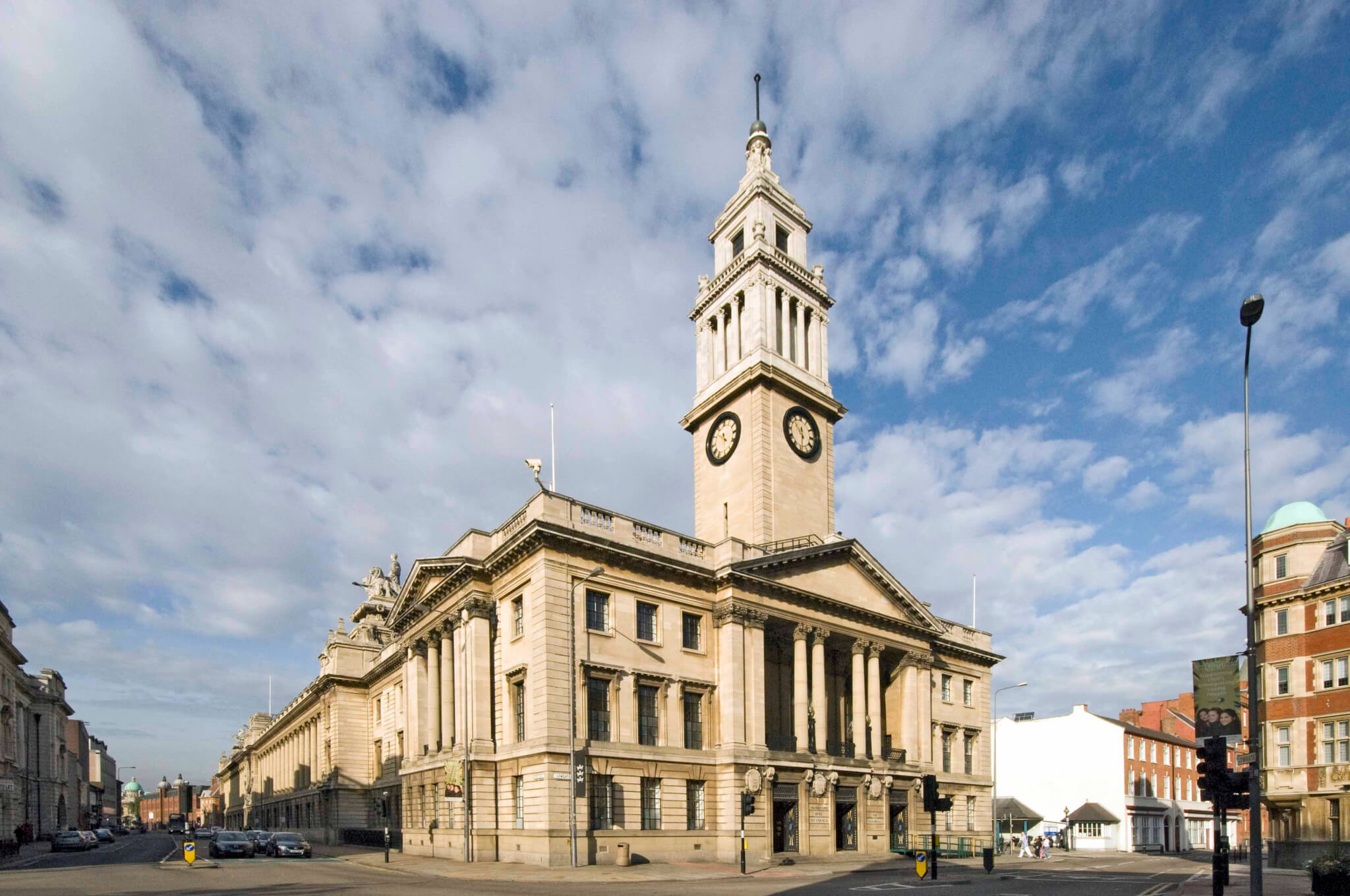 You may think you know a place well, but if you take the opportunity to look up, you may be surprised at what you discover.

To celebrate Yorkshire Day (1st August), Emma Sharpe, Assistant Inspector of Historic Buildings and Areas, gives us her pick of 9 reasons to look up in Yorkshire.

Grade II listed Bank House in Leeds is an architecturally adventurous example of the Bank of England’s 1960s building program. It has an interesting feature which even residents of Leeds who pass the centrally located building every day could easily overlook. What appear to be balconies on the first floor are actually remnants of a visionary 1960s plan to connect the whole city via a network of elevated walkways. These walkways would allow pedestrians to float high above the chaos of the cars below as they made their way unencumbered about the city.

A section of this network was created in the 1970s, and new buildings constructed at this time had walkways built in for eventual connection to the ‘grid’. However, the success of the scheme was short lived and the walkways on Bank House were never actually used. Now they sit as a reminder of the ambitious schemes of the city planners of the 1960s and 70s. Imagine, how different would the city look today if the plan had been fulfilled?

There are some strange goings on in Knaresborough, A Royalist cavalier takes aim at his Parliamentarian adversary, a famous World War II pilot surveys the goings on in the street below, whilst a giraffe sits with his friend the zebra, casually grazing on a second floor window box. Rather unexpected perhaps for a small market town in North Yorkshire.

Knaresborough’s wealth of Georgian buildings often have blocked windows, either as a result of the window tax of the 17th century or a stylistic device to create symmetry on the elevations.  A local group, Renaissance Knaresborough, initiated a public art project to ‘reinstate’ some of these windows, and local artists responded with a fascinating collection of realistic paintings. Many of the windows feature prominent figures from Knaresborough’s past, all of which are detailed here.

Local Legend dictates that you must hold your breath when passing under the entrance to the town, for fear an intake of breath would cause the Beverley Devil to come to life and jump down from its lofty perch.

The devil features on a turret of Grade II listed 6-8 North Bar Without, humorously built by cabinet maker James Elwell in 1893.

Nearly 200ft above the streets of Hull sits a curious relic of the city’s maritime past. On top of the clock tower of Hull’s Grade II* listed Guildhall  four stone cherubs support a giant bowl and the mechanism for Hull’s ‘time ball’. The ball, originally made from copper but now of fibreglass and plastic, would rise up the mast and drop back down at exactly midday. This could then be used by the shipping on the nearby River Hull as a time-setting aid, before embarking on journeys across the globe.

The mechanism stopped working some years ago.  We are currently working with Hull City Council to restore the Time Ball as part of Hull City of Culture 2017 celebrations.

The small town of Todmorden is situated in the bottom of the Calder Valley, between Halifax and Manchester. In the present day it is classed as being within West Yorkshire but over a hundred years ago the town’s loyalties were somewhat more divided.

Until 1888, the Lancashire-Yorkshire boundary followed the line of a waterway, as many boundaries did and still do. Opened in 1875, the Grade I listed Todmorden Town Hall  was built over Walsden Water, effectively meaning half the building was in Lancashire and half was in Yorkshire. The architect, John Gibson of Westminster, referenced this oddity in an elaborate manner on the front of the building. Up on the pediment sit two female figures, representing Lancashire and Yorkshire. On the Lancashire side are representations of the county’s cotton industry, whilst on the Yorkshire side figures represent engineering and agriculture. A frieze below the figures depicts the two sides coming together to prosper in industry. The original Northern Powerhouse perhaps?

6.The Heart of Yorkshire

The tracery (ornamental stonework in the upper section) of the great west window in Grade I listed York Minster is actually much younger than you might think. The stonework was completely replaced in the 1980s, and is an exact replica of the original 14th century design, expertly crafted on site by the Minster’s own stonemasons.

The flowing tracery is in the French style of Gothic, and the organic shape of the upper stonework has earned the window the colloquial nickname of the ‘Heart of Yorkshire’. Folklore has it that if you kiss your beloved below the window you will stay together forever.

Sheffield historically made its name and its fortune from the metal trades. The magnificent Grade I listed Town Hall reflects this wealth in its decorative features.  Designed by the architect EW Mountford and opened in 1897, on either side of the main entrance are two sculptured friezes, each 11 metres long. The majority of the figures represent metal trades workers including smelters, smiths, grinders and hammermen, as well as associated trades such as ivory turners and knife hafters. There are also female figures working at electroplating, buffing and finishing. Next time you are in Sheffield try and see whether you can identify them all.

Upon arriving in Huddersfield through the grand Grade I listed Victorian train station, one of the first things you see is a huge prowling lion atop the aptly named Lion Buildings. The current incarnation of the creature, known locally as Leo, is in fact a fibreglass replica of the original stonework, which became weathered after 125 years of watching over the town.

Local legend has it that Leo will spring down from the building and stalk around the adjacent St George’s Square when the train station clock strikes twelve. If you were hoping to catch a glimpse of this rare sight you may be waiting some time though, the clock doesn’t strike!

9. The Story of Wool

This grand mural in Ilkley stands in lasting homage to Leeds and Bradford as former epicentres of wool and textile manufacture. In 1968, the building was home to the International Wool Secretariat, an organisation formed to promote the sale of wool on behalf of woolgrowers. Architect Richard Collick commissioned the mural, which was recently listed Grade II as a valued example of post war public art.

England’s most significant historic buildings and places are listed so they can be understood and protected. This List has almost 400,000 entries, from palaces and pigsties, to cathedrals, windmills and roller-coasters.

For the first time, we are opening up The List and asking people to share images, insights and secrets of these special places to capture them for future generations.

Perhaps you can share the local history of a listed building in your home town. Can you help us Enrich the List?

Heritage in Your Local Area

Not So Run of The Mill: 8 Inspired Converted Mills in Yorkshire