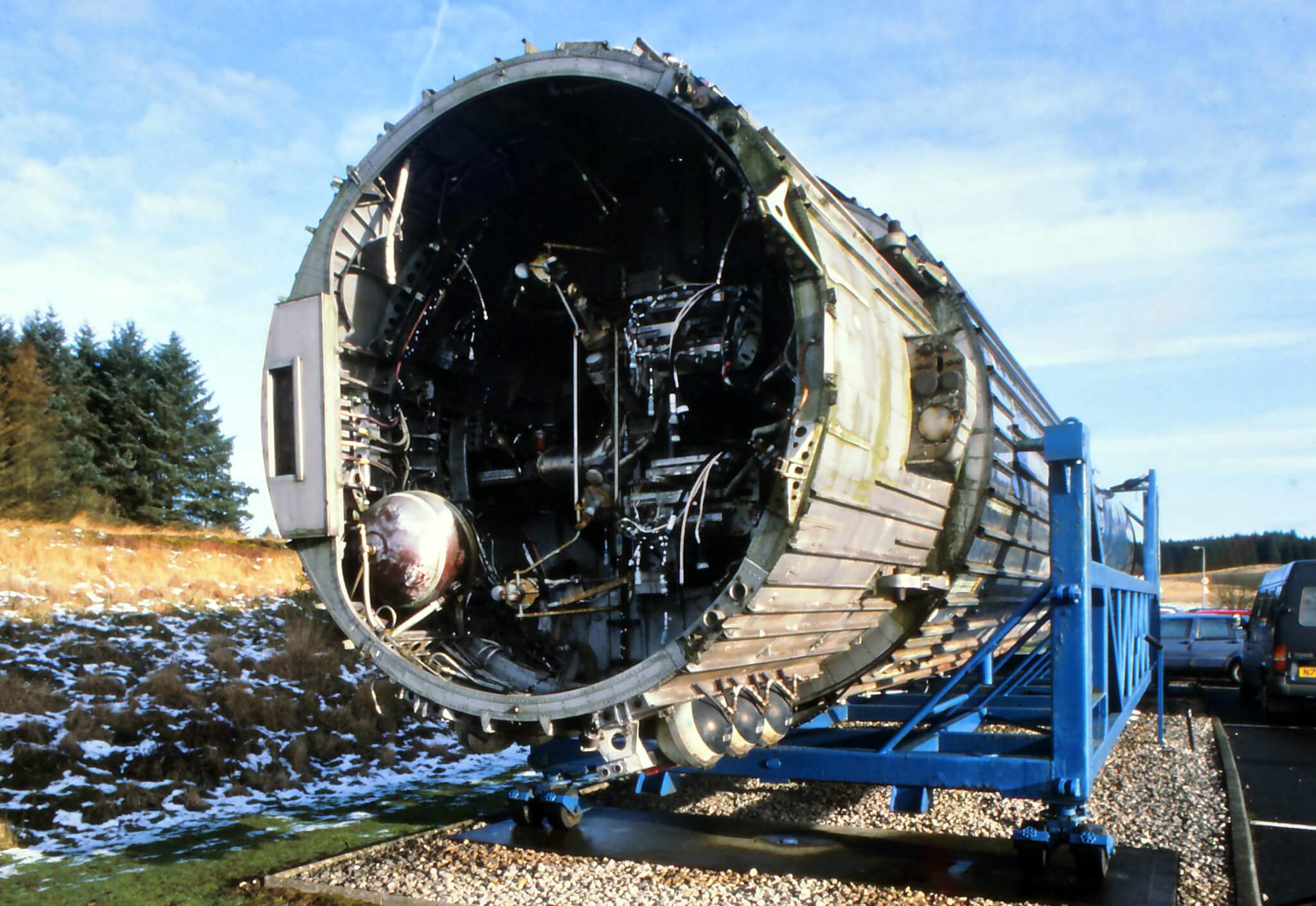 Although Peake is only the 2nd British astronaut to go into space, there is a long, proud, but little known history of British involvement in space exploration. Here we highlight a range of historic sites associated with space exploration in England which are testament to the inventiveness and determination that Tim Peake embodies.

In 1955, the remote moorland to the north of Gilsland, Cumbria, was selected as the site for the Spadeadam Rocket Establishment. Its role was to support the development of the first British intermediate range ballistic missile (IRBM), Blue Streak. Construction work at Greymare Hill began in 1958-59 and the test stands were designed to support the test firing of missiles. The facilities were also crucial for developing the ground support equipment and operational procedures for the launch site at Woomera, South Australia, which are closely modeled on the Greymare Hill facilities.

The Blue Streak missile was manufactured by the defence contractors de Havilland at Stevenage, Hertfordshire. In total 18 units were made, although the last two were unfinished. Of these, 11 were launched and lost, although some components remain in the South Australian desert. A further rocket was sent to French Guiana for launch, but was later broken up. Four others, including this one from around 1959, survive within museums. By the mid-1960s, Blue Streak was adopted to become the first stage of the Europa 1 rocket that was being developed by the European Launcher Development Organisation (ELDO), the forerunner of the present-day European Space Agency (ESA).

Westcott has been synonymous with rocket research and development since the mid-1940s, the Black Knight and Black Arrow rockets were tested there. A-B site and the associated C-D sites house the earliest test stands at Westcott. They were nicknamed the ‘German Emplacements’ because German engineers from WWII were involved in their development. Designed to test liquid-fired motors using kerosene and hydrogen peroxide, both sites were built in 1947 in the very earliest days of the establishment of the research facility. Westcott remains at the forefront of such research and development; its LEROS liquid engine was used in the Mars missions of the late 1990s.

This building, dating to 1938, was associated with the pioneering work of British scientist and early rocket engineer Alwyn Crow (1894–1965). It is the earliest surviving purpose-built rocket-assembly building in England. Although most documentation remains classified as part of Britain’s nuclear defence programme, it is known that Fort Halstead personnel were responsible for developing high explosive and electronic detonators for the atomic bomb and also for the early rocket experimentation that led to the first generation of rocket boosters used in early space exploration.

Goonhilly is the oldest satellite earth station in England and is recognised as the birthplace of satellite communication. In 1962, this first antenna (code-named Arthur) was built to receive and send signals to the first active communication satellite, Telstar. It formed the successful prototype for all subsequent satellite receiving antennae. Following the success of this venture, more and more satellites were launched and further antennae erected as global communication mushroomed. Goonhilly was always at the leading edge of developing satellite communication technology, and by 2004 a total of 64 antennae were present on the site, making it one of the largest such sites in the world.

High Down Test Site, the Needles, Isle of Wight – Scheduled

In the early stages of the Blue Streak missile project, the stands at High Down were used for proof firing – the rockets were fired and monitored while fixed to the stands before they were shipped to Woomera in South Australia for launch. The curving concrete service road gave the site buildings some acoustic shielding and protection from flying debris should there be an accidental explosion. To the north, the Needles headland provided similar protection, as well as preventing observation of the site and the tests from the mainland. The site, a dramatic coastal location, is now under the care of the National Trust, and is one of the few Cold War ‘space race’ sites in Britain open to the public.

Farnborough was once the most important military research establishments in the country. It started life before the First World War as HM Balloon Factory, subsequently becoming the Royal Aircraft Factory and from 1918 the Royal Aircraft Establishment (RAE). Many of the structures of this establishment were built to solve specific research problems and then demolished when no longer required, others, such as the centrifuge, are still in use. The centrifuge was built in the early 1950s to scientifically test, under medical supervision, the effects of acceleration and G-forces on aircrew and equipment. All of the anti-G systems currently used by the RAF have been developed and tested here. More recently the facility has also been used to simulate space launch and re-entry forces, and in 2005 was used to train and assess Dr Greg Olsen in his successful bid to become the third ever space tourist.

Built between 1952-57 and designed by engineers Husband and Company of Sheffield to the requirements of the distinguished British physicist and radio astronomer Sir Bernard Lovell (1913 – 2012). The Sir Bernard Lovell Telescope was the largest fully steerable radio telescope in the world when completed in 1957, and is now the third largest radio telescope in the world. The telescope remains an integral part of the Jodrell Bank Observatory, now part of the Jodrell Bank Centre for Astrophysics at the University of Manchester. The telescope is regularly used to track space probes and tracked the flight of Sputnik 1, the world’s first artificial satellite in 1957. However, the majority of the telescope’s time is used for a much wider variety of space-related scientific observations, including measuring the distance from the Earth to the Moon and to Venus, observations of pulsars, quasars and gravitational lenses, and searching for extraterrestrial intelligence.