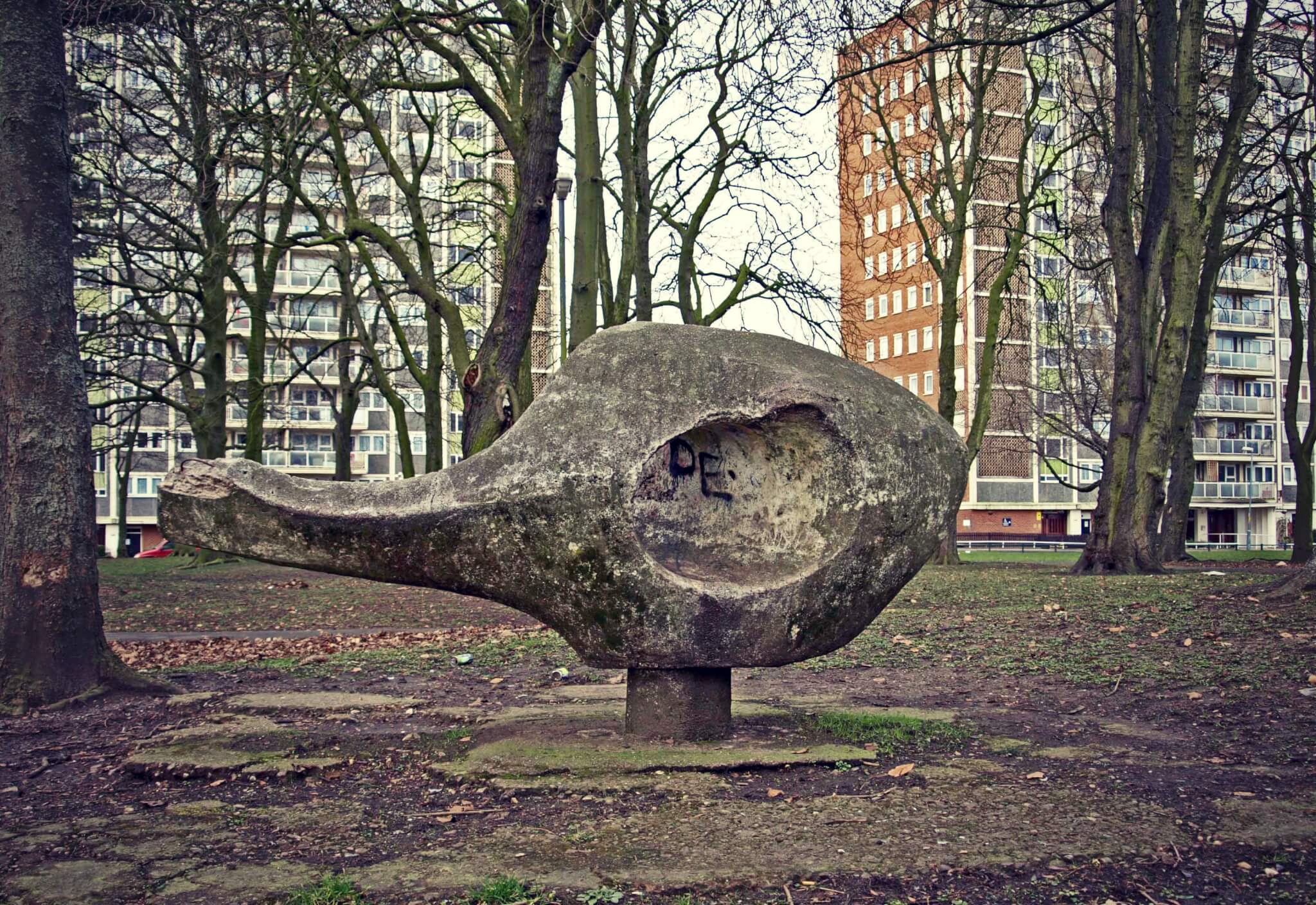 From a sewer gas destructor lamp in Sheffield and a 1930s hairdresser in Scarborough to the traces of a Neolithic henge in Yorkshire and the Titanic band leader’s gravestone in Lancashire, Historic England has today published unusual highlights from the 510 places added to the National Heritage List for England in the past year. Here are some of our favourites:

Once a common feature of our streets, gas lamps are increasingly rare and those combined with sewer vents are even rarer. Their aim was to deal safely with the build-up of methane and stagnant gases in urban sewers, which was a common problem in the late 19th century. Gas destructor lamps were located where there was a pocket of gas: three burning mantles created an intense heat in the lamp hood, causing an up-draught which drew up the sewer gases into the column to be burnt off. The lamp in Stewart Road, Sheffield is a good surviving example in a city where there used to be 82 such lamps.

Originally a 1930s hairdresser, Francis Tea Rooms in Scarborough gives us a rare insight into a genteel section of 1930s society. It is divided up into a number of discrete, timber-panelled booths which were originally designed to give privacy to ladies having their hair dressed.  It was sympathetically converted into a tea room in 2004 but is remarkably unaltered. Outside, the shop front is emblazoned with the single word ‘Francis’ in black 1930s lettering set against a pearlescent peach background.

Around 50 prehistoric henges are known in England but the function of these circular enclosures remains unclear. This site in Northope was first identified by an aerial survey as its ditches and Bronze Age field system show up as dark marks in a corn field. These are called crop marks and occur when the roots of the crops reach deep into the man-made ditches.

In other circumstances it is likely that Wallace Hartley would have lived his life as an unassuming professional musician. However he became band leader on the 1912 maiden voyage of the RMS Titanic. It was reported that the band continued to play as the ship sank and they were feted as heroes, especially Hartley. His gravestone incorporates a violin and music book open at ‘Nearer, my God, to Thee’ – reportedly their last tune. A monument to Hartley in Colne town centre has also been listed at Grade II.

A giant’s stride was once a common piece of playground equipment. Short chains and ropes were suspended from a tall pole so the children could grab the rope and take great leaps around the pole. Few survive now but this example stands in the playground of the former Townfield School. It was donated to the boys of the school in 1866 by the vicar and his wife gave skipping ropes for the girls.

Greenham Common is a name synonymous with the Cold War, given the Cruise missiles stored on the United States Air Force base here and the women’s peace camps that brought the missiles presence to the attention of the world. The Wing Headquarters building was the command centre for the base where the command would have been received to launch missiles if necessary. The building includes a hardened bunker and an intact decontamination suite – one of the best-known survivals in the country and a chilling reminder of the control structures required to wage modern war. The base was returned to the Ministry of Defence in 1992 and was closed in 1993.

In designing a house for his family, Brian Housden drew on influences from European modernism to the houses of the Dogon Tribe of Mali, resulting in a truly unique concrete house. Finished in 1965, it is supported by reinforced concrete ground beams and the walls are faced with Venetian white glass mosaic, panels of glass lenses and bands of narrow steel windows.  The simple interior has untreated board-marked concrete ceilings and exposed services snaking through the spaces.

The interior of the Cauliflower Hotel in Iford, Essex is a real treat. It is a fine example of a gin palace – a Victorian lavish bar built for selling gin. The interior fittings survive, including cut and etched glass, brass fittings, panelling and tiling.

The buried remains of this settlement might well be the major Roman town, Traiectus. Much of the site was destroyed in the early 20th century during the construction of the Fry’s chocolate factory but a substantial part remained untouched. Excavation uncovered a main road and building foundations – archaeological finds such as these will help enlarge our understanding of Roman Britain. The area has been scheduled to protect it from further development.

Darley Abbey is in the Derwent Valley Mills World Heritage Site – a 24km stretch of pioneering industrial mills. The valley’s abundant water supply was the reason for the location of a series of historic textile mills, and the construction of massive weirs to control the flow of the River Derwent demanded major engineering skills. Darley Abbey weir was constructed in 1782 and is 110m in length: a two-part structure with a concave shape curving upstream.

Heap’s Mill is one of the earliest and last surviving warehouse complexes in Liverpool’s Baltic Triangle area, a once thriving industrial area. The historic character of the warehouse’s interior survives and externally it serves as a permanent reminder of Liverpool’s prominence as a port city and of the now almost forgotten rice trade.

A proposal to demolish this 19th century mill led to a request to spot list it the Grade II listing will help secure the building’s future and there is a planning proposal to convert it into flats.

Small-scale bacon smokehouses are rare nationally and even more so in London where this example is, just up the road from the Smithfield meat market. Throughout the 19th and 20th centuries, smokeries moved to larger-scale industrial facilities, leaving the smaller examples defunct. Although the building has been converted to offices, its original function is still evident in the racks on the upper part of the building and in the external walkways which allowed the monitoring and control of smoke levels by means of sliding circular shutters.

Milton Keynes was the most ambitious new town to be planned and built in England during the post-war period and was laid out as an American-style grid lined with sleek, urban buildings. The light and airy bus station designed by the city’s in-house architects department in 1975 is a small, simple, functional building with an elegant steel frame.

At the beginning of the 19th century, as Lytham grew from a fishing village into a sea bathing resort, beach pebbles were used to construct pavements for the new streets. Craftsmen used multi-coloured pebbles to create geometric patterns and seaside-themed pictures. The pavements in Bath Street are a rare survival as most have been covered over or replaced.

The red-brick Ivybridge aqueduct was built around 1800 to serve a woollen mill and is a striking reminder of the town’s industrial past. No longer in use, it now an unusual feature in the garden of a home for elderly people.

The church of the English Martyrs by architect Eduardo Dodds is a bold, geometric post-war building built in brick, concrete and copper with touches of brutalism. The interior is dominated by a curved timber roof, with abstract stained glass made by the monks of Buckfast Abbey in Devon.

The grounds of Hornby Castle in Bedale, North Yorkshire were originally a medieval hunting park which were landscaped in the 1770s for Robert Darcy, the 4th Earl of Holderness. It is believed, but not confirmed, that Lancelot ‘Capability’ Brown was the designer. The gardens include open, grassed parkland and pleasure gardens featuring woodland paths and water features.

Lead has been mined on the Mendips since at least the Roman period and St Cuthbert’s and Chewton Lead Mines in Priddy, Somerset were operated from at least the early 16th century. Their final phase began in the mid-19th century when improvements in waste processing meant it was more economical to re-work the waste left by earlier mining activity.

Rope and twine-making were also significant industries in Somerset in the 19th century, with between 30 and 40 manufacturers known to have operated. The introduction of steam power led to production taking place in covered walks, rather than in the open. Only two twine works survive in West Coker, including the West of England Twine Works in West Coker, Yeovil. (listed Grade II)

Margate was a European trend-setter for sea bathing in the 18th century: originally, bathers were taken into the sea in simple carts before bespoke bathing machines were introduced there in the 1720s. The Walpole Bay Tidal Pool, built in 1937, continued this tradition. Its construction made it possible for large numbers of people to swim in sea water at all stages of the tide. It was an impressive feat of engineering, featuring interlocking concrete blocks, each weighing a ton, strengthened by old tram rails.

This unusual play sculpture in Acocks Green, Birmingham was created by John Bridgeman in 1960 as part of a series of semi-abstract sculptures he designed for post-war housing estates. He wanted to provide children with sculpture that could be tactile, stimulating and robust rather than roped-off, ‘do not touch’ art.

The only official and up-to-date database of all nationally designated heritage assets: National Heritage List for England