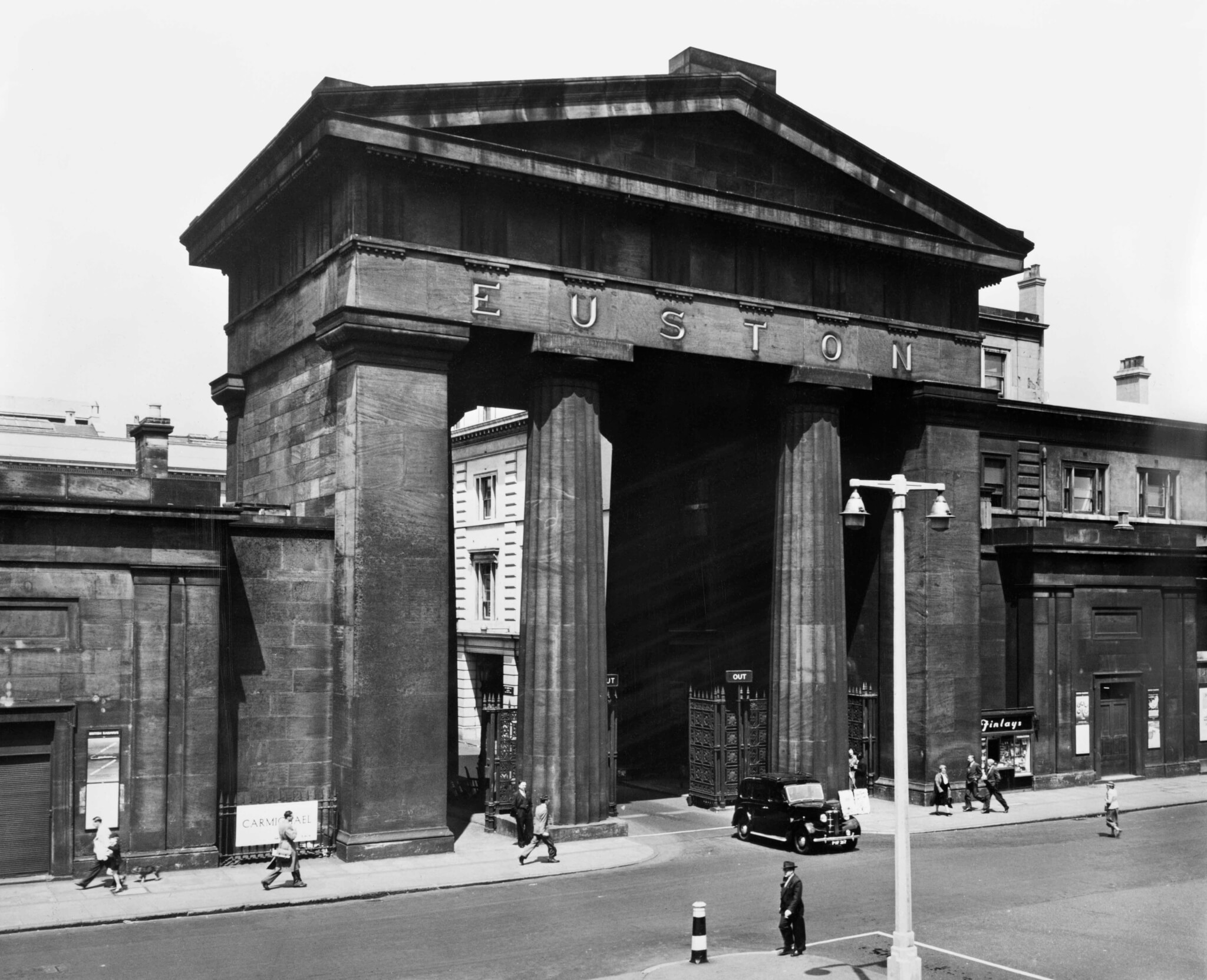 This fine Edwardian station was demolished in 1977 despite a public outcry.  The historic fabric was razed and trains on the old Great Western line to Leamington were terminated at Moor Street – originally devised as an overflow station for Snow Hill. However, the damage to cross-city services was so severe that the station was rebuilt, in a smaller, far more utilitarian idiom, in 1987 – a mere ten years after the station had disappeared.

The unique Newmarket Station of 1848 had an imposing facade comprising a colonnade of eight sets of paired Ionic columns topped with massive entablature plinths and finials. Closed in 1967, the station buildings survived until 1980 – when, despite their listed status, they were regrettably demolished. Today the site is a housing development.

The most celebrated of all Britain’s railway monuments, the severe, Doric, pedimented Euston Arch was not strictly an arch but actually a 72-foot entrance gateway to a courtyard. Completed in May 1838 and costing £35,000, it prompted the functionalist developer-architect Lewis Cubitt to comment that ‘a good station could be built at King’s Cross for less than the cost of the ornamental archway at Euston Square’. Despite the Euston Arch’s worldwide renown as perhaps the most potent symbol of Britain’s Victorian industrial achievements, demolition of the Arch began on 6 November 1961.

This confident and Modernist station at Portishead was barely a decade old and serving a busy port when it was closed and demolished in 1964 as a result of the notorious Beeching Report.  Steven Parissien, author of The English Railway Station, laments that, “Richard Beeching was an amateur in the railway world, economically out of his depth and politically awkward. Britain’s railways were thus disembowelled by a man who should not have been let near a railway, let alone the Ministry of Transport.”

This fabulous Arts and Crafts extravaganza at Mundesley-on-Sea, built in 1898, had half-timbered gabled pavilions connected by a graceful, balustrade wooden arcade. Its steeply-pitched roof was punctuated by chunky chimneystacks and a slender clock tower with a cupola.  It was demolished following the closure in 1964, as a result of Beeching’s recommendations.

The influence of minimalist Modernism was unmistakable at Hastings Station, built in 1931. Rebuilt to complement and advertise the new, electrified lines introduced by the Southern’s Chief Engineer, A W Szlumper, its giant entrance porch was furnished with a single, large lunette window – a motif that had become an internationally-recognised symbol for the railway station at the turn of the twentieth century.

The splendid trainshed roof at Birmingham New Street had been badly damaged by bombing in 1940, and all traces of the Victorian station were later demolished rather than rebuilt. The ‘new’ New Street found few admirers: Country Life’s readers voted it the second worst eyesore in the nation in 2003.

This quirky, confident station at Wakefield Westgate, built in 1867, had been provided with one of the most eccentric clock towers in the country: a fusion of Art Nouveau and Gothic styles, 97 feet high, and decorated with a cast-iron lantern and a gilded weathervane. The late 1960s was no time for such architectural fun, however, and Westgate was ruthlessly rationalised and downsized.

Nottingham Victoria, of 1900, was a riot of Jacobethan and Baroque motifs: Dutch gable ends, pedimented gables, heavily-rusticated columns, a wooden cupola and open, segmental pediments all competed joyously for attention. After the station closed for business in September 1967, almost the whole site was flattened to make way for a shopping centre, in the middle of which the station’s cheerfully eclectic clock tower now stands marooned.