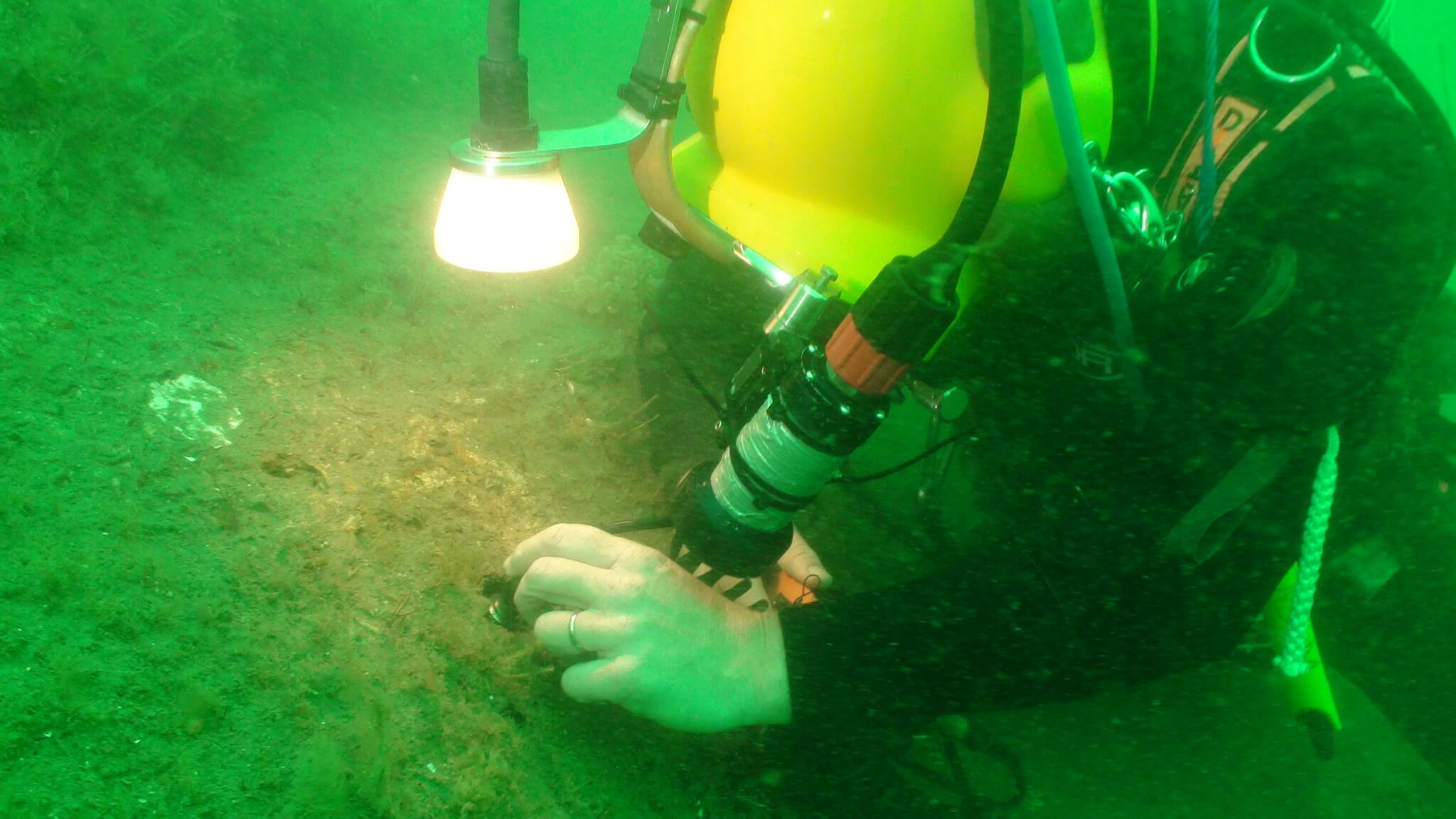 English Heritage has over a decade of experience in the management of shipwreck sites. This experience is largely based on managing change to the remains of sunken wooden warships – we’ve recently published guidance on the management of pre-1950 ships and boats.). However, in order to begin to understand the management requirements of metal-hulled vessels, an initial programme of research, ultrasonic investigation and analysis on the remains of two protected early submarines (the Holland No. 5 and A1) began off the south coast during the summer of 2012. Our first aim was to understand the stability of steel hulls of wreck sites without damaging them.

The Holland No. 5 and the A1 are two very early types of petrol-driven submarine which were in service with the Royal Navy between 1902 and 1911. The A1 sank in 1911 in Bracklesham Bay while the Holland No. 5 sank in 1912 off Beachy Head. Following their discovery during two independent expeditions, the two boats were given statutory protection in 1998 and 2005 respectively. You can see more details about both submarines in their entries on the National Heritage List for England. These two boats were chosen for study because they lie relatively close together; because previous investigations and possible damage have been restricted owing to their protected status and, more importantly, because information on their construction and hull-thickness was readily available from naval historical records.

Ultrasonic thickness gauges are especially useful for non-destructive
thickness measurement testing, particularly where you can only access one side of a hull. These gauges are used in many ways and for many purposes around the world. As ultrasonic thickness gauges listen for echoes and can measure virtually any material such as plastics, metals, and internally corroded materials, they are ideal archaeological tools. For our research, we used a Cygnus DIVE underwater ultrasonic thickness gauge because of its ease of use and portability. Rated to 300m depth, the Cygnus gauge can be worn on a diver’s forearm enabling a valuable free hand when working underwater.

Fundamental to the success of direct thickness measurement for assessing the current condition of a metal shipwreck is knowing what the original metal thickness was at the time of sinking. This enables the total metal loss to be calculated, and provides a baseline for assessing a site’s stability or deterioration. Both the Holland No. 5 and A1 were built out of steel (an alloy of iron and other elements) and a naval publication from 1979 provides the best account of the designs of the two classes of submarine. Here, records of the Director of Naval Construction (DNC) show that hull plating on both the Holland No. 5 and A1 was ½” (12.7mm) thick.

Upon inspection underwater, we could see the hulls of both boats were covered by a layer of concretion (a hard compact mass of corrosion products from iron combined with seawater) colonised by soft marine growth. For the test area on each boat, we used a wire brush to clean away the marine growth and removed a small disc of concretion using a hammer and 20mm chisel to expose solid metal of the hull. We then held the Cygnus gauge’s probe against the hull to measure its thickness and repaired the cavity with epoxy putty.

Investigations on the Holland No. 5 were purposely limited to a single reading of 6.5mm, while readings on the A1 of 5.6mm, 5.7mm and 8.4mm demonstrate potential variability of hull thickness. These different measurements show the need for multiple readings taken across a hull to identify erroneous readings and thickness variability and in order to locate areas of instability.

Using an ultrasonic thickness gauge for the first time as an archaeological management tool in British waters, we’ve been able to develop a diver-based methodology to monitor metal hulls of historic wreck sites. This will allow us to implement measures where sites are at risk, so as to manage the recent past for the future.

With thanks to Hanna Steyne of Wessex Archaeology