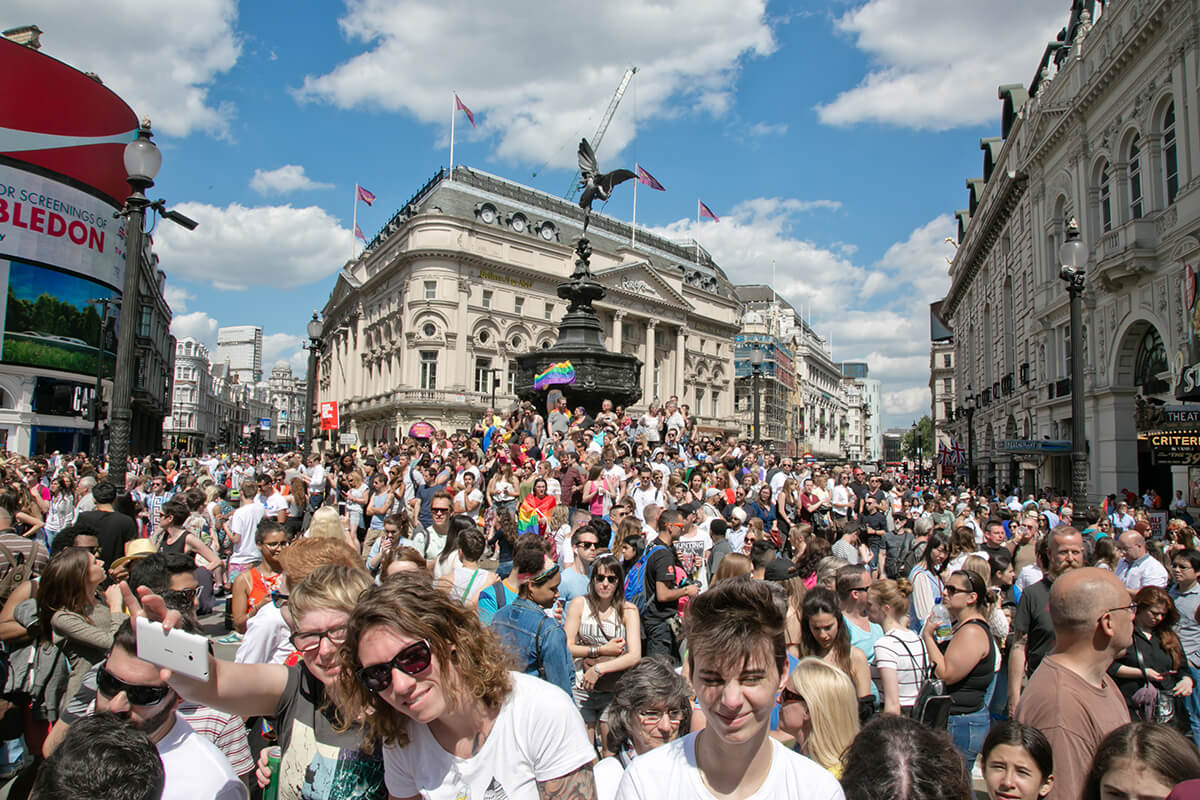 Whether you’re taking part in Pride celebrations, or looking for something new to discover, here are seven fascinating LGBTQ+ landmarks to look out for in central London.

Start this tour at the junction of Duchess Street and Portland Place, Marylebone.

In 1966, the Beaumont Society was established as a support group for transgender people, making it the oldest of its kind in the UK.

The Society met for its annual dinner at Broadcasting House in the 1970s and 1980s before moving it to New Kensington Town Hall.

In 1974 the group helped organise a transgender conference (sometimes deemed the first) called ‘Transvestism and Transsexualism in Modern Society’ at The University of Leeds.

From here, walk south to Regent Street, then turn down Heddon Street.

2. Heddon Street Kitchen (The Cave of the Golden Calf)

9 Heddon Street is the former site of what is considered to be the first gay bar in England.

Once the basement of a cloth warehouse, the Cave of the Golden Calf was opened by wealthy bohemian Frida Strindberg in 1912 as an ‘artists cabaret club’, decorated with murals and works commissioned by local artists.

The Cave went bankrupt in 1914, but paved the way for the generation of nightclubs that came after it. Today the site is occupied by Gordon Ramsey’s restaurant, Heddon Street Kitchen.

While on Heddon Street, check out the doorway of number 23, famed for featuring on the front cover of David Bowie’s iconic album The Rise and Fall of Ziggy Stardust and the Spiders from Mars.

Continue down Regent Street and turn down Argyll Street.

A jaunt through the West End wouldn’t be complete without a look into one of its decadent, grand theatres.

The London Palladium on Argyll Street has been delighting audiences with cabaret, musicals and theatre since 1910.

Notably, the thetre saw a string of ‘Diva’ concerts in the 1950s to 1980s, featuring such stars as Shirley Bassey, Judy Garland, Marlene Dietrich and Liza Minnelli attracting a huge gay following.

In the 1970s, Bette Davis performed and the streets became the scene of the largest public gathering of LGBTQ+ people to be seen anywhere in the country, before Pride marches started gathering pace in the 1980s.

Continue down Regent Street to the bright lights of Piccadilly Circus.

4. Piccadilly and the Shaftesbury Memorial Fountain

From the 1850s to the 1970s, the Piccadilly and Haymarket areas were a notorious centre for prostitution in London, with both male and female sex workers operating on the streets and in nearby pubs and clubs.

The Shaftesbury Memorial Statue was placed here in 1892, but its full name is somewhat contested. It started as ‘Anteros’ (the god of selfless love) before changing to ‘The Angel of Christian Charity’, in a bid to temper local outcry that the statue was situated in a ‘vulgar’ part of town (i.e. the theatre district).

The statue was (and is still) referred to as Eros, the god of sensual love, a moniker which was hailed by some as an ironic representation of the more carnal side of the neighbourhood.

In the early 20th century, under the one-time guise of the Lyon’s Corner House, the Trocodero represented a grand baroque example of exquisite Edwardian dining.

The Long Bar at the Trocadero was a male only preserve, popular with middle class gay men during the 1920s and 1930s.

Next, turn up Rupert Street.

In 1971, the Almost Free Theatre (since lost) was set up on Rupert Street by American social activist and actor, Ed Berman.

It was an experimental fringe theatre, which pioneered the lunch time performance, and famously staged the first ever season of gay plays in Britain, in early 1975.

The season, entitled ‘Homosexual Acts’ featured three plays by gay writers and directors, with the intention of shedding a realistic light on the mainstream gay stereotype. The season was initially scheduled to last until April, but was extended to June due to popular demand.

Finally, make your way all the way down to Adelaide Street near Charing Cross.

7. A conversation with Oscar Wilde

Hambling said of the piece: ‘The idea is that he is rising, talking, laughing, smoking from this sarcophagus and the passerby, should he or she choose to, can sit on the sarcophagus and have a conversation with him’.

Thank you for following our walking tour. Let us know what we’ve missed in the comments below.

You can find out more about LGBTQ+ heritage by exploring our Pride of Place research project.