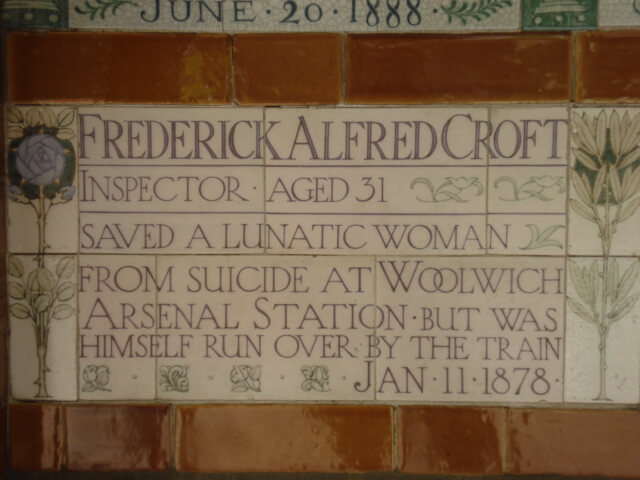 This morning, thousands of Harry Potters, Peppa Pigs and Matildas were dispatched to schools around the country to mark World Book Day.

While these little characters celebrate their best-loved books, we’ve picked out some historic places that inspired some of the nation’s classics.

“Mr. Jaggers had duly sent me his address; it was, Little Britain, and he had written after it on his card, “just out of Smithfield, and close by the coach-office.”

The Memorial to Heroic Self Sacrifice is a public monument in Postman’s Park, in Little Britain, London. The earliest of the memorials commemorate the selfless bravery of many of Queen Victoria’s subjects, who died saving the lives of others. Although built after Dickens’ death, many of the plaques convey a sense of the Dickensian city; reflecting the perils of Victorian life and the tragedy so readily found in the lives of his characters.

“Of course there’s Hell. Flames and damnation,” he said with his eyes on the dark shifting water and the lightning and the lamps going out above the black struts of the Palace Pier, “torments.”
“And Heaven too,” Rose said with anxiety, while the rain fell interminably on.
“Oh, maybe,” the Boy said, “maybe”.

The Palace Pier opened in 1899,  a steel, cast-and wrought-iron structure hosting kiosks and buildings of wood and metal. Many of the roofs were made from tin pressed to resemble fishscale tiles.

Greene knew Brighton well, “No city before the war… had such a hold on my affections”. In the 1947 film of the novel, the newspaperman, Hale, is killed by the hoodlum Pinkie on the Palace Pier ghost train and and tossed into the sea. At the film’s end, Pinkie returns to the Pier to meet his end, falling from the structure into the depths below.

London is a dramatic backdrop to the emotional upheavals in The Night Watch, with air raids through deserted, bombed-out streets by the river and St Paul’s. St Paul’s was emblematic of the wartime spirit of resistance and unity of the British people. It survived the devastating bombing raids that decimated much of the city, thanks to the work of the Cathedral Fire Watch – a group of volunteers who risked their lives to protect it.

“He was on a dark heath, and there was a strange salt smell in the air. Looking up he saw before him a tall white tower, standing alone on a high ridge. A great desire came over him to climb the tower and see the Sea. He started to struggle up the ridge towards the tower: but suddenly a light came in the sky, and there was a noise of thunder”.

Also known as The Monument or The Observatory, the Grade II* listed Perrott’s Folly stands 96-foot above the surrounding suburban sprawl of Edgbaston, Birmingham.  Tolkien spent much of his life in Birmingham, and lived in a street near the tower as a child, possibly taking it as inspiration for the Two Towers in his Lord of the Rings trilogy.

Built in 1758, the Folly has been used for many purposes over the years, from a hunting retreat to a weather station. There are many stories to explain why the tower was built; one is that the owner, John Perrott, built the tower so that he could see his wife’s grave, fifteen miles away.

“The Tower is like a small town and its morning routine clatters on around him… the keeper of the king’s beasts trots up to say it’s dinner time — they eat early, the beasts — and does he want to see them fed? I take it very kindly, he says, waiving the pleasure; unbreakfasted himself, slightly nauseous, he can smell stale blood and from the direction of their cages hear their truffling grunts and smothered roars. High up on the walls above the river, out of sight, a man is whistling an old tune, and at the refrain breaks into song.”

The Tower looms large in Wolf Hall, with the constant threat of confinement and execution lurking heavily throughout.  Anne Boleyn and Thomas Cromwell both lost their heads in the Tower. Cromwell was executed for treason on the 28th July, 1540, on the same day that King Henry married his fifth wife, Catherine Howard. He was beheaded on Tower Hill and his severed head was displayed on a spike on London Bridge.

“Every creature in Bath, except him, was to be seen in the room at different periods of the fashionable hours; crowds of people were every moment passing in and out, up the steps and down; people whom nobody cared about, and nobody wanted to see; and he only was absent. “What a delightful place Bath is,” said Mrs. Allen as they sat down near the great clock, after parading the room till they were tired; “and how pleasant it would be if we had any acquaintance here.”

The Great Pump Room was built in the 1790s and was one of the most prominent civic buildings in Georgian Bath. It was at the heart of fashionable life in the city, being visited by all, whether sick or well, every day. Visitors promenaded up and down the great room, and drank the waters from eight in the morning until three in the afternoon.

“Now I’m opening out like the largest telescope there ever was! Good-bye, feet!’ (for when she looked down at her feet, they seemed to be almost out of sight, they were getting so far off)”

“It doesn’t do to be curious at Jamaica Inn, and I’ll have you remember that”

The Grade II listed Jamaica Inn stands in the middle of Bodmin Moor, an eerie setting for Du Maurier’s tale of murderous ship-wreckers. It was built in 1750 as a coaching inn and had associations with smuggling.  The inn is alleged to be one of the most haunted places in Great Britain. Du Maurier wrote her novel in 1930 after becoming lost in thick fog on the moors and seeking refuge at the inn.  Whilst sheltering, the local rector is said to have entertained her with ghost stories and tales of smuggling, inspiring her to write the gothic novel.

“Right over the town is the ruin of Whitby Abbey, which was sacked by the Danes, and which is the scene of part of “Marmion,” where the girl was built up in the wall. It is a most noble ruin, of immense size, and full of beautiful and romantic bits; there is a legend that a white lady is seen in one of the windows.”

Bram Stoker found some of his inspiration for ‘Dracula’ after staying in Whitby in 1890; the haunting remains of the ancient abbey provided him with an atmospheric backdrop to his gothic tale.  The abbey was founded in 651AD and the abbess, Hild, was said to have been seen in one of the windows. Tradition also grew that she walked the abbey as a phantom.

Can you tell us about other historic places that have featured in fiction? Let us know and we’ll plot your suggestions on our map.

Find information on other listed places