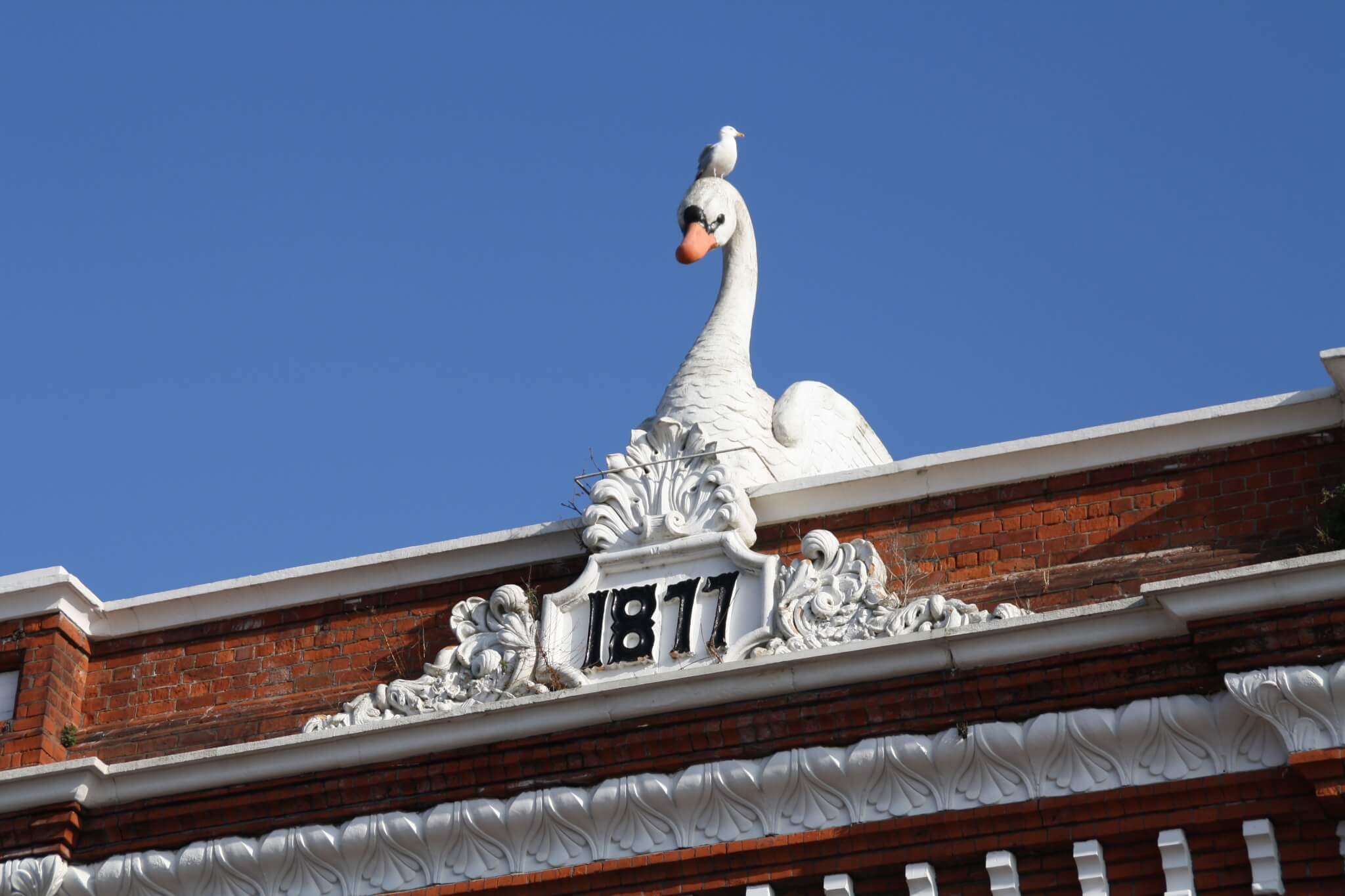 Boston, Lincolnshire, didn’t just give its name to Boston, Massachusetts in the USA: many of its most prominent citizens actually left to become leaders in the new settlement.

In the Middle Ages, it was one of the greatest ports in all England, and there are still many echoes of that seafaring past. Today, because it’s a bit off the beaten track, few people realise what a fascinating town it is, with its two marketplaces, ancient warehouses and the great tower of St Botolph’s church, standing guard over it all.

Here are some of Boston’s architectural highlights:

One of the first things you see in Boston if you arrive by train is this splendid swan crowning a former feather factory in Trinity Street, near the railway station. It reminds us that processing feathers for upholstery was once an important industry in the town.

Boston’s Market Place is one of the largest in England and its market, is one of the busiest too. It’s worth looking up at the wonderful variety of buildings that surround the Market Place, some of which are well over 400 years old.

One of the earliest purpose-built shopping parades in England is in the Market Place, built by Boston Corporation in 1820. It’s bow-fronted, a bit like a Regency chest of drawers, and there are separate entrances to the flats above the shops by way of stairs at the back.

Boston’s parish church St Botolph’s is one of the finest in all England and has the tallest tower, the famous ‘Stump’. It dominates the town and the surrounding fens for miles around.

Egyptian style buildings are rare in England and Boston’s Freemason’s Hall, built between 1860 and 1863, is one of the finest. It’s not very large but, what it lacks in size, it makes up for in character with its two great palm columns and hieroglyphic inscriptions. It was based on an actual Egyptian original, the Temple of Dendur, in Nubia.

Many people in the past have thought Boston looked Dutch and it actually stood in for the Netherlands in Powell & Pressburger’s film ‘One of our Aircraft is missing’, made in 1942, when it wasn’t possible to do location filming there for obvious reasons. The water, the red brick gables and pantiles all helped to create the illusion. The Church House in Wormgate and a tall gabled building at 10 South Street both featured in the film.

Caroline Oldrid, the wife of the great Victorian architect, Sir George Gilbert Scott, came from Boston where the town’s main department store still belongs to the Oldrid family. Scott’s sons George Gilbert Junior and John Oldrid restored the medieval Shodfriars Hall and, behind it, built the amazing Conservative Club, later used as a theatre that looks as though it belongs in Antwerp or Gdansk.

Just off the Market Place are a series of very narrow lanes, the broadest being Dolphin Lane, lined with shops and cafes. The street layout of this part of Boston has hardly changed since medieval times.

Wormgate is the ancient entrance into Boston from the north west and is still a narrow street lined with ancient houses, some of which have handsome Regency bowed shopfronts.

St Mary’s Guildhall is one of Boston’s most ancient buildings. One of the first structures to be built of brick in Lincolnshire, it was constructed about 1390. It later became Boston’s town hall and two of the Pilgrim Fathers, William Brewster and William Bradford, who sailed to America in the Mayflower in 1620, are believed to have been briefly held in its cells in 1607 when they made an earlier attempt to flee the country.

Boston is still an active port but the docks are now further downstream. The old port was in the heart of the town along the river Witham, which is called the Haven at this point. It still has a maritime feel to it with 18th and 19th century warehouses lining the quays.

See some of the other titles in our Informed Conservation Series

4 comments on “A Brief Introduction to Boston: the Making of a Market Town”