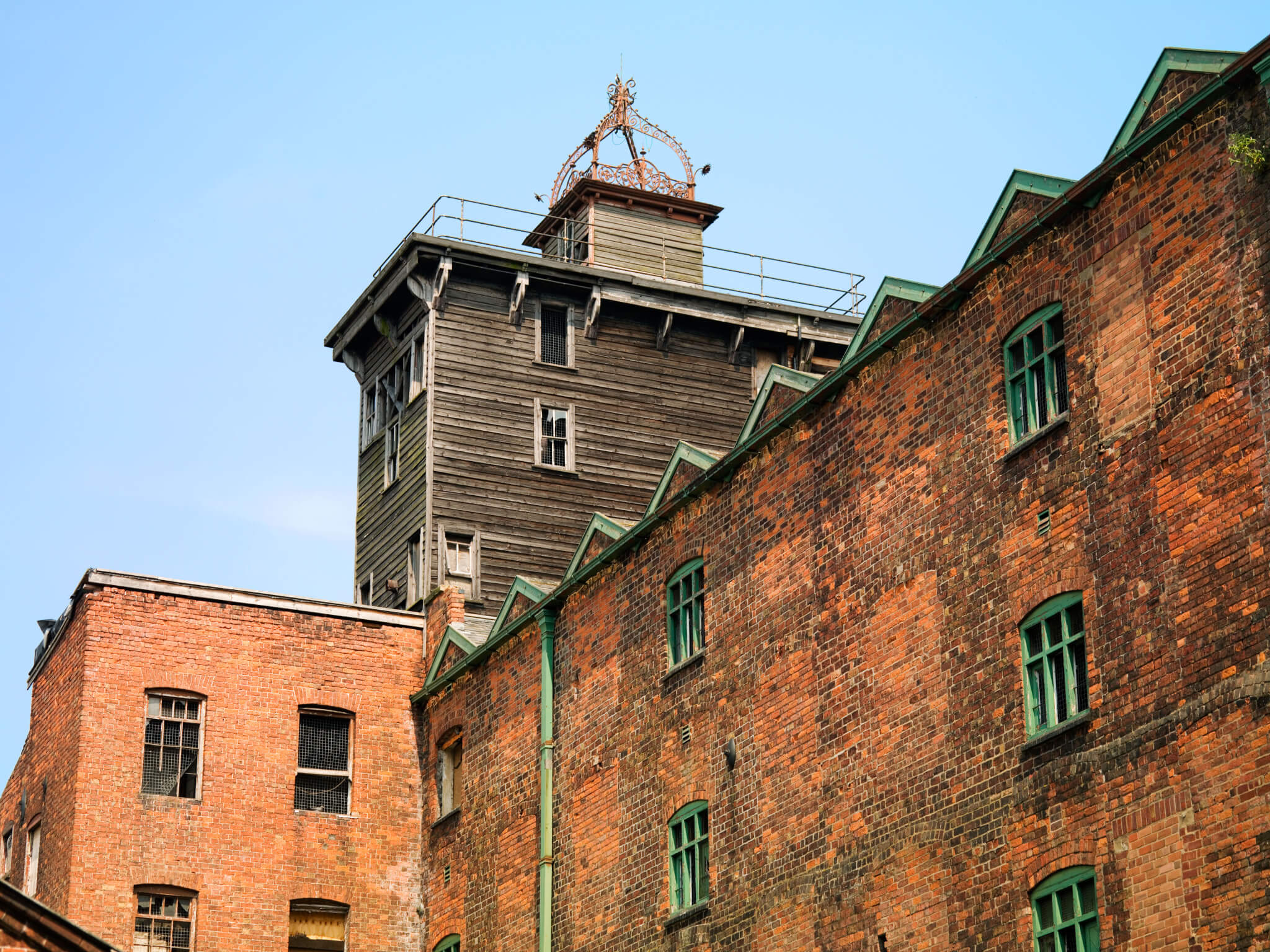 Shrewsbury Flaxmill Maltings is a rare survival from a dramatic stage in the Industrial Revolution. Built in a period of innovation and social upheaval, when industry was transforming towns and countryside, it was one of the largest and most technically advanced of a new generation of factories. Its home, Shrewsbury, was an area with a long tradition of both textiles and iron production. The flaxmill embodied the latest thinking in factory design and structural engineering.

In the late 20th Century it fell out of use and into disrepair until Historic England, then known as English Heritage, took it on. It is now the focus of an extensive conservation project. This week a new visitor centre opened its doors, which will be run by the Friends of Flaxmill Maltings, and a book about this incredible site has just been published.

First Building to Use an Iron Frame

Built in 1797, this pioneering building was the first to use an internal iron frame of columns, beams and tie rods. Charles Bage, one of the local partners, designed it this way to be fireproof with the structural strength needed to make it a multi-storeyed building. It was a bold and experimental first step towards the skyscrapers which define our cityscapes today.

A Major Employer of Women and Children

The flax industry was a major local employer and in the early 19th century more than 400 people worked at the mill. Well over half the workforce were women and 35% were children under 16. An Apprentice House, which is basically a dormitory, was added in 1810, making room for more child workers when fewer adult men were needed because of the introduction of new machinery.

Conditions at work were harsh by modern standards: some jobs were very bad for the workers’ health and it wasn’t until the 1850s that the working week was reduced to 48 hours.

When Flax was made into Linen Yarn

Flax is a plant which grows in much of the world, including Britain. The tough fibres inside its stems make linen yarn and thread, while its seeds make linseed oil. Here, flax was processed into linen yarn and thread then sent away for weaving and sewing into a range of products from clothing to rope, playing cards and even wings for early aeroplanes.

In the 1790s water was still the main source of power in industry, sometimes in combination with steam power. Water from the Shrewsbury Canal, built beside the mill at the very same time, powered the steam boilers. The first engine at the mill was a Boulton and Watt beam engine of just 20 horse power – the latest technology in 1797 but incredibly primitive compared with later mill engines. Five later engines were installed as the mill grew, along with boilers and tall chimneys which would have dominated the local area.

The flaxmill embodied the principles of factory design developed by John Marshall, who had pioneered the factory system in the flax industry just a few years earlier. Flax factories contained a variety of building types to turn flax from a raw material into a finished product. The mill was packed with hundreds of machines, the majority were originally constructed of wood, arranged for efficiency in separate departments for preparation, spinning and making dyed thread. The carefully considered design and layout of the mill was the forerunner of methods used by specialist industrial architects a century later.

From Flaxmill to Maltings

Following the closure of the flaxmill in 1886 the machinery and engines were removed. In the 1890s the site was converted into a modern maltings and remained in industrial use until the 1980s.

Today the buildings of the flaxmill and maltings are exceptionally well-preserved. It is one of the great iconic monuments of the Industrial Revolution, and a challenge to conservation.

0 comments on “Shrewsbury Flaxmill Maltings: the Birthplace of the Modern Skyscraper”