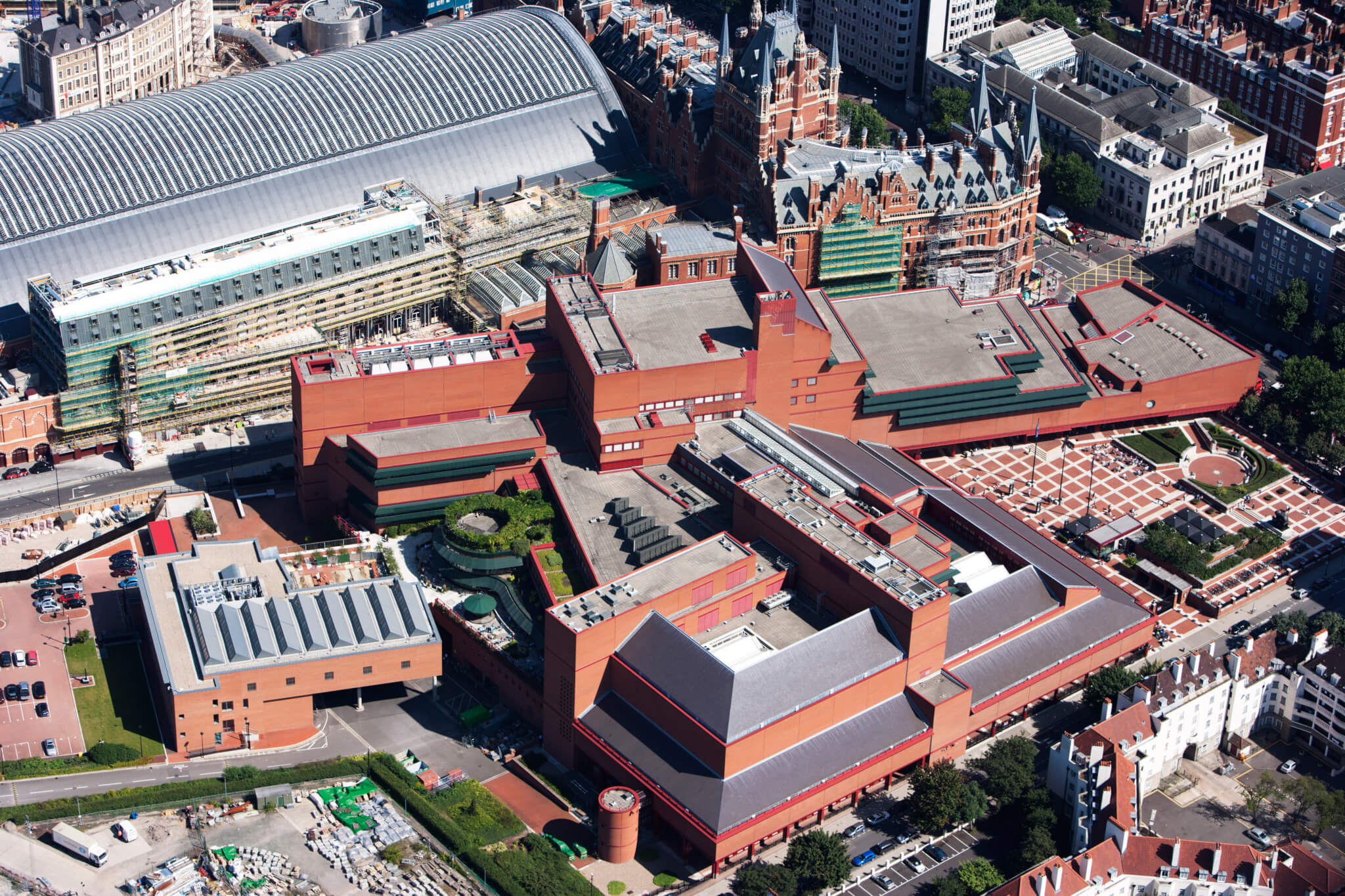 In the 1960s there was a lifting of government controls on building which saw an unprecedented spate of library building with 350 being built across the UK. Scandinavian building styles dominated and for small libraries, circular or polygonal buildings were popular.

Historic England has carried out extensive research into later 20th century libraries from which the best examples were selected for listing. The British Library, one of England’s finest modern public buildings has been listed at Grade I and seven local libraries across England have been listed at Grade II; together they represent the very best in public architecture.

Colin St John Wilson’s dramatic yet accessible design incorporates fine materials and a generous display of public art. The Library’s carefully thought out interiors achieve its ultimate goal of creating a space to inspire thought and learning. The architecture is both immense and extraordinary and its warmth and quality of spaces and finishes have made it a much-admired building. It has a prominent London location and holds its own amongst a parade of Grade I buildings; St Pancras Hotel and Station and King’s Cross Station.

This bold, modernist style has local nautical references in its use of giant porthole windows. The main space rises dramatically through two floors to provide an open lending library conducive to browsing, an enclosed children’s library, and a more intimate, reference library conducive to studying.  Many original fixtures and fittings survive including original angular timber bookcases, bold geometric floor tiles, over-sized timber doors with horizontal oblong lights, staircase and balcony balustrades with grey marble inlay, original peg boards for displaying art work, and a pottery tile wall mural in the former coffee bar.  It was designed by Paterson, Macaulay and Owens in 1965 and built in 1967-71.

Built in 1979-81, the central library was a major addition to the commercial centre of the new town and a prestigious building. The library has an imposing, monumental façade which is in keeping with the style of the ultra-modern town, incorporating curved elements and details in rich russet brick. The library is significantly enhanced by original artworks, incorporated in and around the building.

Hampshire County Council Architect’s Department was noted for its inventive and successful public buildings, and Chandler’s Ford library was its showpiece. The quality of the library is evident in its thoughtful planning, the structure and use of materials and, in its fixtures and fittings, notably the mural by Graham Crowley. The library was designed and built in 1981-2, and was well-received on completion, both in the architectural press and by the public.

This is a large and impressive example of a county library. It’s a curved building tucked into a narrow street and has an understated elegance with sculptural interiors. The open plan lending and reference libraries wrap around the central drum where the double height space and cantilevered staircase has a sense of drama. The building has been well managed and  has changed little since it was built in 1965-6.

The futuristic exterior of this library resembles a flying saucer. A mezzanine exhibition space overlooks semi-open plan reference and reading room areas. The main space is generously day lit from the high windows and roof lights, and incorporates wood and strip panelling between the exposed concrete ribs. The integration of a raft of community services under a big roof captures something of the inclusivity and breadth of ambition of the mid-20th century welfare state. It was built in 1967-70 to the designs of architects A.G. Sheppard Fidler and Associates.

Lillington Library is relatively early for its type, as a smaller branch library built in 1959-60. It has a strikingly colourful façade in Festival of Britain style. It is relatively little altered, and importantly, retains its original aluminium full-height windows. The architect, Henry Fedeski took care to consider the structure in its setting; its two-storey design balancing a block of flats opposite and its position, set back from the road, to allow for planting to soften and enrich the new roads and buildings.

Built in 1963-5, Suffolk Record Office was designed by Donald McMorran who is regarded as one of the most sophisticated designers of neo-classical buildings in the post-war period. The library remains largely unaltered, externally and internally, and retains the majority of its original furniture and fittings including parquet floors throughout and an elegant stairway.

The English Public Library 1945-85 – This short guide provides an introduction to the development of library buildings in post-war England. It is intended to support the listing selection guide on Culture and Entertainment.

1 comment on “Just Listed: 8 Cutting-Edge Libraries of the Late C20”