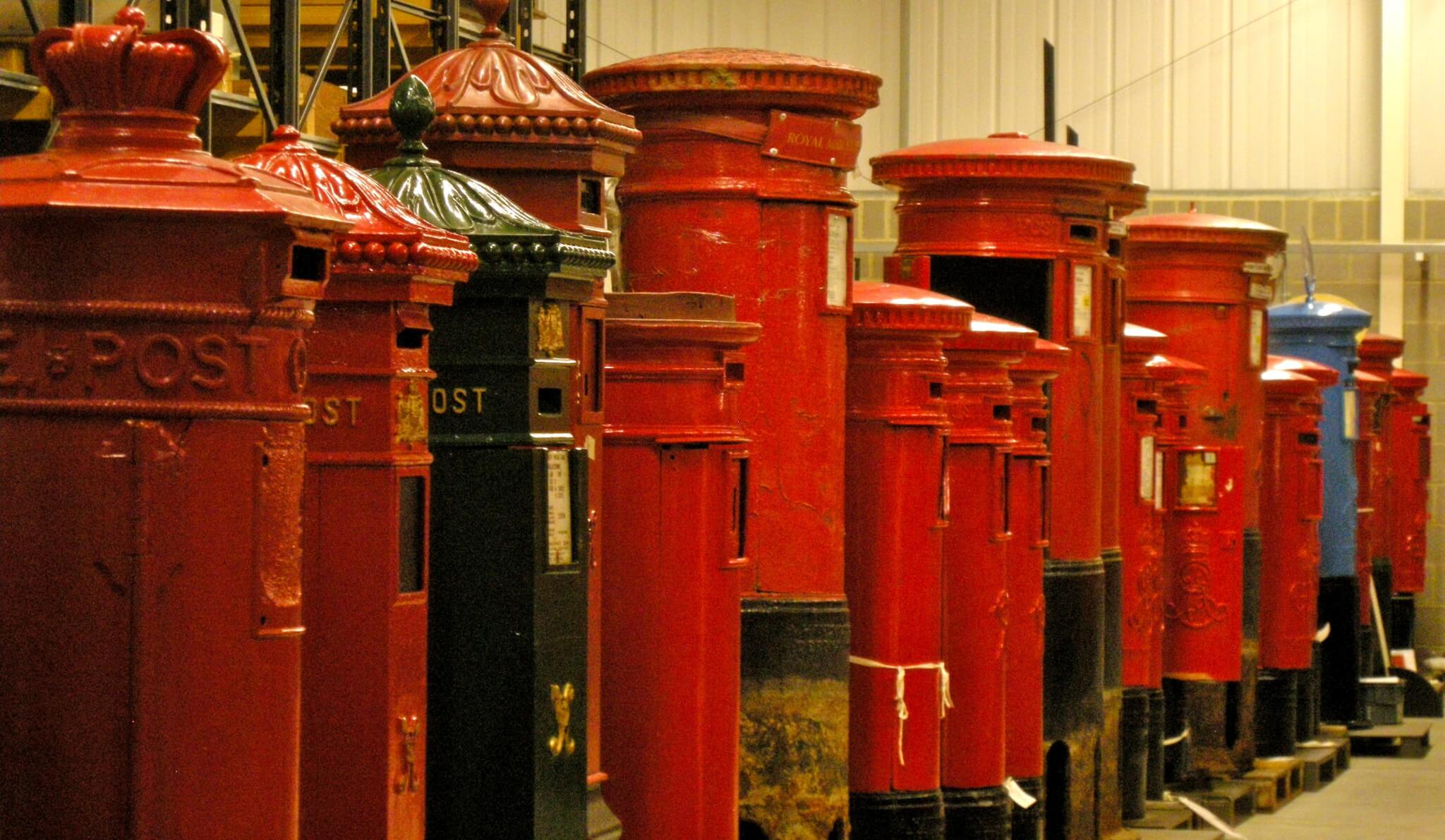 As culturally significant as they are practical, the Royal Mail post box is a cherished feature of our streets. With over 85,000 boxes across England, it is likely you pass one every day.

The story of these iconic British beacons begins in the Channel Islands, via Europe.

The 1840 Postal Reform act introduced affordable postage and easy-to-use adhesive stamps. Yet the nearest letter-receiving office was miles away from many communities. It took Anthony Trollope (the Victorian author, then a General Post Office official) to notice that in Europe, locked cast-iron pillar boxes were placed in convenient locations with regular collection times.

Trollope first introduced this efficient scheme to the Channel Islands in 1852, and pillar boxes emerged on the mainland the following year. By 1860, over 2,000 ‘standard’ design roadside boxes were established: by the 1890s, this had increased to 33,500.

The Stamp of Authority

Boxes from wall to pillar and lamp-shaped designs have found their way into our daily existence, but all share two obvious features. Firstly their colour: many of the UK’s earliest boxes were painted green to blend in with the landscape, but were repainted the famous ‘pillar box red’ by 1884 to increase visibility.

Their second shared feature is their insignia, or marking, of the monarch reigning when the box was placed. More than half of all British boxes carry Elizabeth II’s ‘EIIR’ stamp and Scottish crown, but around 15% date from the reign of George V (1910-1936) and a number survive from the reigns of George VI, Edward VII and Victoria. If you’re really lucky, your local post box could be one of the 168 identified as dating from Edward VIII’s very short reign in 1936.

The Letter Box Study Group has identified around 800 different types of post box, all adapted for different environments. Small lamp-post boxes were introduced in 1896 for use in London squares and rural locations; oval boxes with two letter slots emerged in larger towns and cities, and enamel-fronted boxes were inserted into the walls of Post Offices.

In the last 160-odd years, around two dozen contractors have been hired as post box designers. The results – from J W Penfold’s elegant 1866 hexagonal box, to the rectangular sheet steel designs of 1968, and the Olympic gold boxes – means we don’t have one criteria for listing boxes, but a number listed are based on their rarity, age, intactness, location near listed buildings (like the Cambridge Penfold box above) and design quality.

A more detailed history can be found on The Postal Museum’s website – our banner image, by Martin Deutsch, shows the museum’s ‘pillar box alley’. For information on other types of street furniture that we consider for assessment, from street lighting to signposts, read our Selection Guide.

Curious about arts and crafts, mystified by medieval settlements or intrigued by industrial heritage? Our “Brief Introduction to” series is for those who want to find out more about the historic environment. From buildings and monuments to art and landscapes, we summarise our knowledge using examples from the National Heritage List for England.

19 comments on “A Brief Introduction to the Post Box”