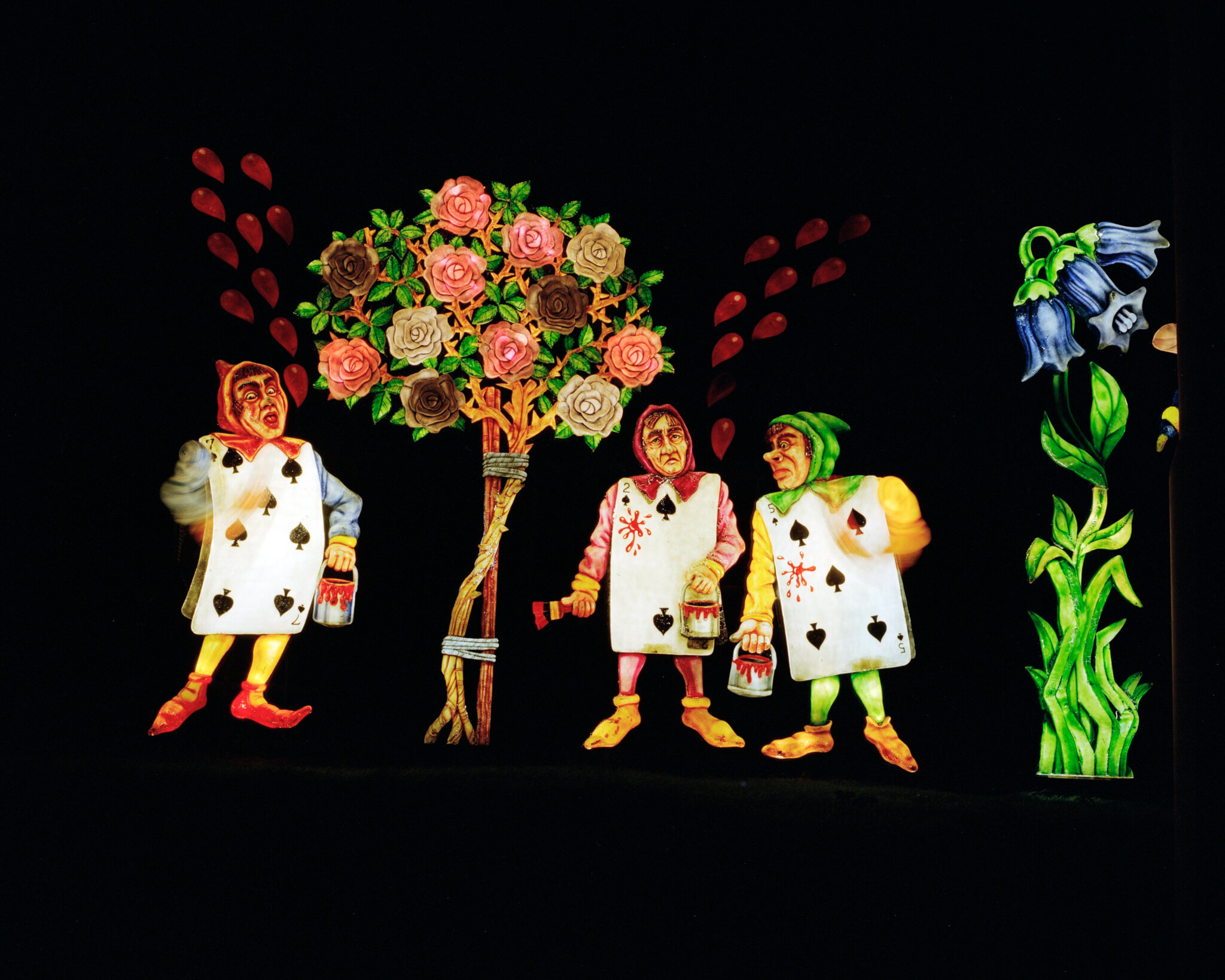 The surreal world of Wonderland has captured the imagination of little and big kids everywhere since Alice’s adventures were first published in 1865. The range of country-wide events to celebrate the 150th anniversary of the book are as eclectic and imaginative as Wonderland itself, from walking tours and Mad Hatter’s tea parties to interactive performances where the audience take on Alice’s journey and become part of the story.

Here are six of Wonderland’s wonders and the places said to have inspired them:

‘Well! I’ve often seen a cat without a grin,’ thought Alice; `but a grin without a cat! It’s the most curious thing I ever saw in my life!’

The inspiration behind Carroll’s smirking Cheshire Cat is claimed by some to come from the Grade I listed church where Carroll’s father was rector in 1843. St Peter’s Church in Croft on Tees in Yorkshire, has a stone carving of a face of a cat or lion. Seen from a pew it has a wide smile but on standing up, the grin seems to disappear, just as it does when Alice encounters it.

2. Down the Rabbit Hole

‘She had never before seen a rabbit with either a waistcoat-pocket, or a watch to take out of it, and burning with curiosity, she ran across the field after it, and was just in time to see it pop down a large rabbit-hole under the hedge’

Carroll’s father went on to become canon of the Grade I listed Ripon Cathedral in 1852. The cathedral contains misericord carvings that are distinctly Wonderlandesque. One shows a griffin catching a rabbit who escapes down a hole and another features a character that looks like Alice did after she followed the ‘eat me’ instruction and shrank.

3. The Pool of Tears

‘Now I’m opening out like the largest telescope there ever was! Good-bye, feet!’ (for when she looked down at her feel, they seemed to be almost out of sight, they were getting so far off)’

Oxford and its surrounds were the inspiration for much of Wonderland; Carroll was a mathematics lecturer at Christ Church College when he wrote the book. In Christ Church’s Great Hall there are a pair of long-necked brass “firedogs” guarding the fire that are reminiscent of the description of Alice when she grew in size in the Pool of Tears. The breath-taking Great Hall also has a portrait of the young Lewis Carroll and its stained glass windows illustrate scenes from the book.

‘One day Alice came to a fork in the road and saw a Cheshire cat in a tree. Which road do I take? she asked. Where do you want to go? was his response. I don’t know, Alice answered. Then, said the cat, it doesn’t matter’

Carroll’s rooms at Christ Church overlooked the Deanery Gardens where a wooden door in the garden wall led to the enclosed Cathedral Garden. From here another special door gave Queen Elizabeth I access to the Cathedral from the royal apartments. Within the Cathedral Garden a chestnut tree grows which is thought to be the model for the tree in which the Cheshire Cat appears.

The bells of Tom’s Tower in the quadrant do not keep time with the rest of Oxford’s bells, adding to the strangely otherworldly atmosphere and chiming with the Mad Hatter’s tea party where it is always 6 o’clock.

‘Alice did not wish to offend the Dormouse again, so she began very cautiously: `But I don’t understand. Where did they draw the treacle from?’

The ‘treacle well’ that the Dormouse mentions at the Mad Hatter’s tea party is said to be based on the Grade II listed St Margaret’s Well at Binsey, Oxfordshire. Locals named the structure ‘the treacle well’ because of its legendary healing properties; in the middle ages it was said that St Frideswide cured King Algar of blindness with treacle discovered in the well. In Christ Church Cathedral a stain glass window by the pre-Raphaelite artist Sir Edward Burne-Jones depicts the legend. This was installed in 1860, a few years before Alice in Wonderland was published.

‘Take off your hat,’ the King said to the Hatter. ‘It isn’t mine,’ said the Hatter. ‘Stolen!’ the King exclaimed, turning to the jury, who instantly made a memorandum of the fact. ‘I keep them to sell,’ the Hatter added as an explanation; ‘I’ve none of my own. I’m a hatter.’

Carroll told Alice the story of Wonderland on a riverboat journey from Grade II listed Folly Bridge in Oxford in July 1864. Near the bridge was the house of Sir Tom Randall, Lord Mayor of Oxford and former hatter, who some believe inspired the Mad Hatter character.

The Victorian hatting industry was perilous for some workers, whose felting work exposed them to chronic mercury poisoning. Symptoms included tremors and psychological disturbances, hence the phrase, as mad as a hatter.

Do you know of a building or place associated with Alice in Wonderland? Or do you know of a historic building that is named after a character? Let us know in the comments below.

– Read more about the hatting industry

3 comments on “6 Places that Inspired Alice in Wonderland”