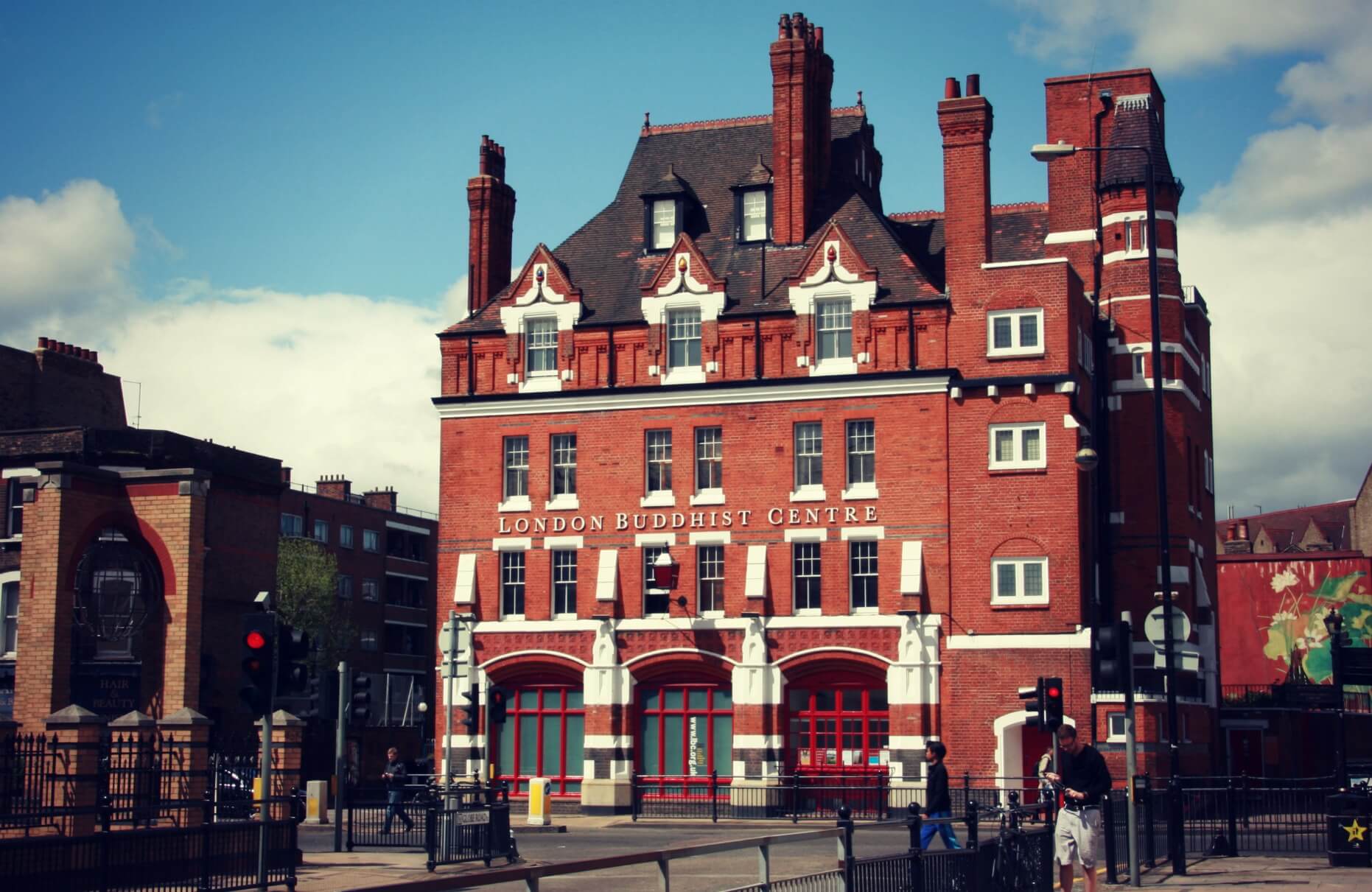 Buddhism in Britain has received a reasonable amount of academic attention, particularly how various traditions and lineages have adapted to the British social and cultural context, but there has been little dedicated concern about the buildings that Buddhist communities build and use. It was during our first research visit to Jamyang London, a Tibetan Buddhist centre in a converted Victorian court-house, that it became abundantly clear that the buildings Buddhists use tell us a great deal about their corresponding communities, and are a fascinating way to understand the establishment and growth of Buddhism.

Imagine fundraising as a community for years to buy a building that is on the ‘At Risk’ register; that is large but has no windows, heating, electricity, learning how to do the appropriate renovations as a community and ultimately creating a space that is both useful for a Buddhist group and that honours the history of the building and its heritage. This is what a number of Buddhist groups do across the country. Their buildings represent dedication and devotion, not only to practicing Buddhism but also, for some groups, to upholding a cultural link outside of England, for example to Thailand or Taiwan.

Several of the groups we visited have renovated buildings that tell an important story about English social history – a Victorian fire-station, several stately homes, an Edwardian industrial school, an Anglican clergy training centre, and a former Catholic abbey, to cite a few examples. Whilst these buildings are now Buddhist centres, most are also opened out to the public, preserving the heritage for all. And the process of building or renovating is often closely intertwined with the development of Buddhist communities themselves, as a shared project helps strengthen community bonds and allows Buddhist practice to start before the buildings are even finished.

Different Buddhist groups use their built environment in different ways and the buildings certainly look very different. See for example the immediate visual differences between Wat Buddhapadipa in the Thai tradition and Triratna’s Manchester Buddhist Centre (both pictured below). Buildings are also used for different things; monuments, as monastic accommodation or retreat centres, to housing meditation classes, cultural events and ceremonial occasions. Some include cafes, B&B accommodation, and hire out spaces for community meetings. Choosing a particular building can also be shaped by the links that a group might have with a Buddhist tradition or school, including those outside of the UK that might give support towards building or renovating in a particular style.

What do Buddhist buildings tell us about Buddhist communities in England? Whilst our analysis is a work-in-progress, we can say confidently that the answer is a great deal. From monasteries to monuments, renovated listed buildings to purpose built temples, the variety of buildings is a physical embodiment of the diversity that has been identified as a feature of Buddhism in Britain. Mapping the establishment of different buildings uncovers a rapidly changing built landscape, and one which is becoming increasingly embedded into both urban and rural environments as Buddhism becomes more and more a feature of religion in England. This increase and diversification is a material testament to is the huge effort that Buddhist communities go to, often using volunteers, to build and renovate what are usually dilapidated, unloved (and sometimes listed) buildings.

Our research runs from September 2013 to September 2014, and we will be visiting at least sixteen different Buddhist buildings across England, conducting site visits and in-depth interviews. In addition, in recognition of the growing number of Buddhist communities and corresponding Buddhist buildings (Buddhists, according to the 2011 census are on the rise in the UK) we are also running an online survey, open to any Buddhist group across England. In both the survey and the site visits we ask questions about the styles and types of buildings used, whether they are purpose-built or renovated, how they were constructed and why, and the issues facing communities in relation to upkeep. Importantly, we will ascertain what the buildings mean to the various Buddhist communities who use them. Please forward this blog post and the online survey to any Buddhist groups that you know of and leave any questions you may have about the project in the comments below, or find me on Twitter or on our Building Buddhism blog.

3 comments on “What do Buddhist Buildings Tell Us About Buddhist Communities in England?”