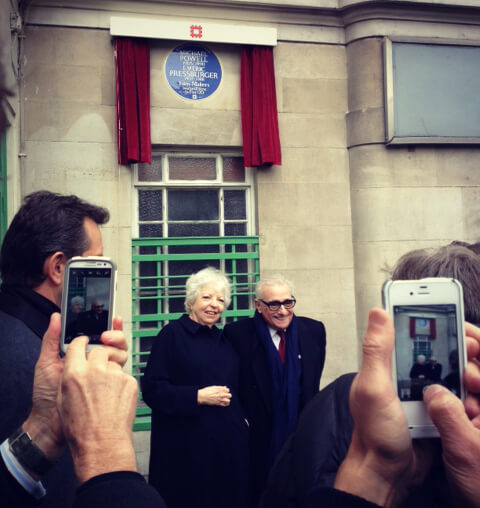 Today a blue plaque has been erected to commemorate one of the greatest collaborations in British film history – that of Michael Powell and Emeric Pressburger. The plaque is on a giant 1930s mansion block near Baker Street, for it was in a small, unfurnished service flat here that the pair set up an office for their production company, The Archers, during the Second World War – they were there from 1942 until 1947. When I visited the block, some time ago now, to see whether it might be a suitable place for a plaque, the flat happened to be empty, and a kind security guard took me up to stand in the empty, anonymous rooms from which so many of their most inventive and best-loved films had been sent out into the world. It was wonderful to think of how much delight had been created here – both for war-time cinema-goers in a darkened London, and for generations to come.

When the files for Powell and Pressburger arrived on my desk, I knew very little about the film-makers and so investigating their lives and their work so as to establish where would be the most appropriate place to commemorate them, was a real adventure. A friend let me raid the battered little suitcase of Powell and Pressburger films he kept under his bed, and I was immediately entranced by them – from the quiet piquant romance of ‘I Know Where I’m Going!’ (1945), filmed in black and white in the Scottish Hebrides, to the dazzling technicolor tour-de-force of The Red Shoes (1948). My favourite – and I think many people’s – is A Matter of Life and Death (1946), a spectacular afterlife fantasy that truly has to be seen to be believed.

Powell and Pressburger came from very different backgrounds – Powell was the son of a Kentish hop farmer, whilst Pressburger, a Hungarian Jew, had arrived in England only in 1935. Together, in their films, they created an imaginary world unlike any other, but one generally agreed to be quintessentially British, combining romantic conservatism with experimental flair. Their exceptionally close friendship must have been an important part of their secret. I spent some happy hours in the British Film Institute archives reading their correspondence – I was trying to work out exactly where they had lived and worked, and when – and the strong affection between the two men was clear and very touching.

We did look into putting plaques on houses in which these friends had lived – a small and slightly scruffy but elegant house in Chester Square for Powell, and a detached 1920s villa in Hendon for Pressburger – but there were various difficulties with these, and in the end it was decided that a joint plaque bearing two names so inextricably linked in the popular imagination, and marking the place where they had worked at such a glorious time for their partnership, would be particularly fitting. Thelma Schoonmaker, Powell’s widow, remembers driving around London with her husband, who would excitedly point out the blue plaques they passed. We hope he would have been pleased to think that one day Martin Scorsese, one of Powell and Pressburger’s greatest fans, would reveal a plaque to surprise and inspire fans old and new, as they make their everyday way through this part of London.

Esther Godfrey used to be a Blue Plaques Historian, assessing figures for commemoration, and researching suitable addresses for plaques. She now works in Designation, advising on the statutory protection of buildings and archaeological sites in the West Country.