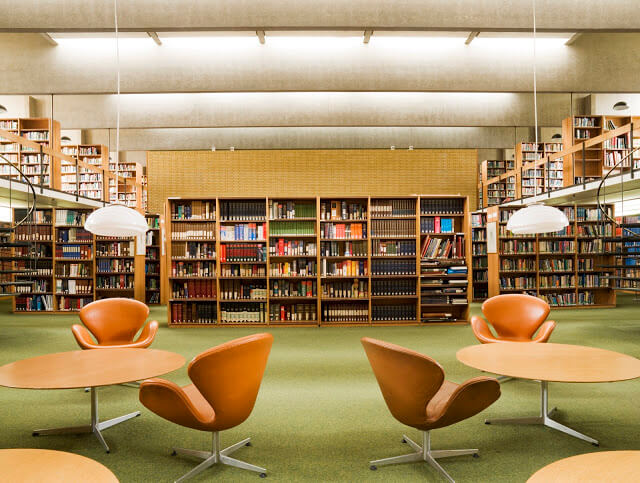 From cathedrals to private houses, war memorials to sculptures, we celebrates the post-war era and its best listed buildings. Elain Harwood, Senior Architectural Investigator for English Heritage, remembers when she first learned to appreciate this tough architectural style.

This is an exciting time for one of English Heritage’s often talked about activities, that of recommending buildings from the later twentieth century for listing. The process began 25 years ago when in July 1987 Bracken House, newspaper offices in the City of London by Sir Albert Richardson, became the first post-war building to be listed.

When I joined English Heritage’s London Region later that year, it was to find its historians feverishly writing reports and descriptions on an aspect of architecture that scarcely anybody had looked at since the buildings were completed. I was thrown in at the deep end to write descriptions of houses, and some 400 flats by the cutting-edge developers Span. I’d thought that the 1950s were the boring years of austerity and family values between Attlee’s Labour Government, which blew itself out with the Festival of Britain, and the rise of youth culture in the swinging sixties. What I found was a simple yet elegant architecture still much inspired by Scandinavian brick classicism, in which new techniques such as thin concrete shells and new materials like aluminium played an important part. I was hooked.

I think it was good to look at those schools and houses of the 1950s before considering the great mass of building that followed in the 1960s. We were soon made to consider the great hulks of brooding concrete that inspire such love-hate responses from people, when the next year Alexander Fleming House closed.

Brutalism and the place of its master from an earlier generation, the Hungarian architect Ernö Goldfinger, was only beginning to be recognised. It didn’t help that the project had been taken over before the first phase was completed in 1962 as the headquarters of the Department of Health and Social Security, home of unpopular benefit policies. It was rejected for listing and closed, and when members of one of English Heritage’s committees asked to visit the adjoining Odeon cinema, also by Goldfinger, we learned that bulldozers had been sent inside instead.

Alexander Fleming House survived, fortunately, in a conversion to flats that – despite overpainting and new glazing – has retained all the important fabric and removed the goldfish bowl transparency hated by the former office workers. It was finally listed earlier this year, amid a feeling that attitudes were changing and a generation later the fast disappearing world of the 1960s was not only more appreciated but increasingly lamented. Indeed English Heritage has been criticised for not recommending more Brutalist buildings for listing.

So the time feels right for a review and a celebration. 2013 is not only the centenary of the first major legislation concerned to protect our built heritage, but it marks 25 years of post-war listing. There are now around 700 post-war listed buildings, from prefabs to tower blocks and including sculptures, telephone boxes and Cold War bunkers as well as Coventry Cathedral and the Royal Festival Hall.

Their importance, and above all their beauty, will be displayed in an exhibition in the Wellington Arch at Hyde Park Corner in London, which opens on 25 September and runs until 24 November. It features brilliant photographs by James O. Davies from a forthcoming book, Space, Hope and Brutalism, being published by Yale University Press next year. Why does this feel like closure on an era and time to move on – to the 1970s or even the post-modernism of the 1980s? Well, it’s taken me fifteen years to write the text of that book, and now it is being edited the end is in sight. I will have to find a new project with which to annoy my friends on holiday!

0 comments on “Brutal & Beautiful: A Major Year for Post-War Listing”