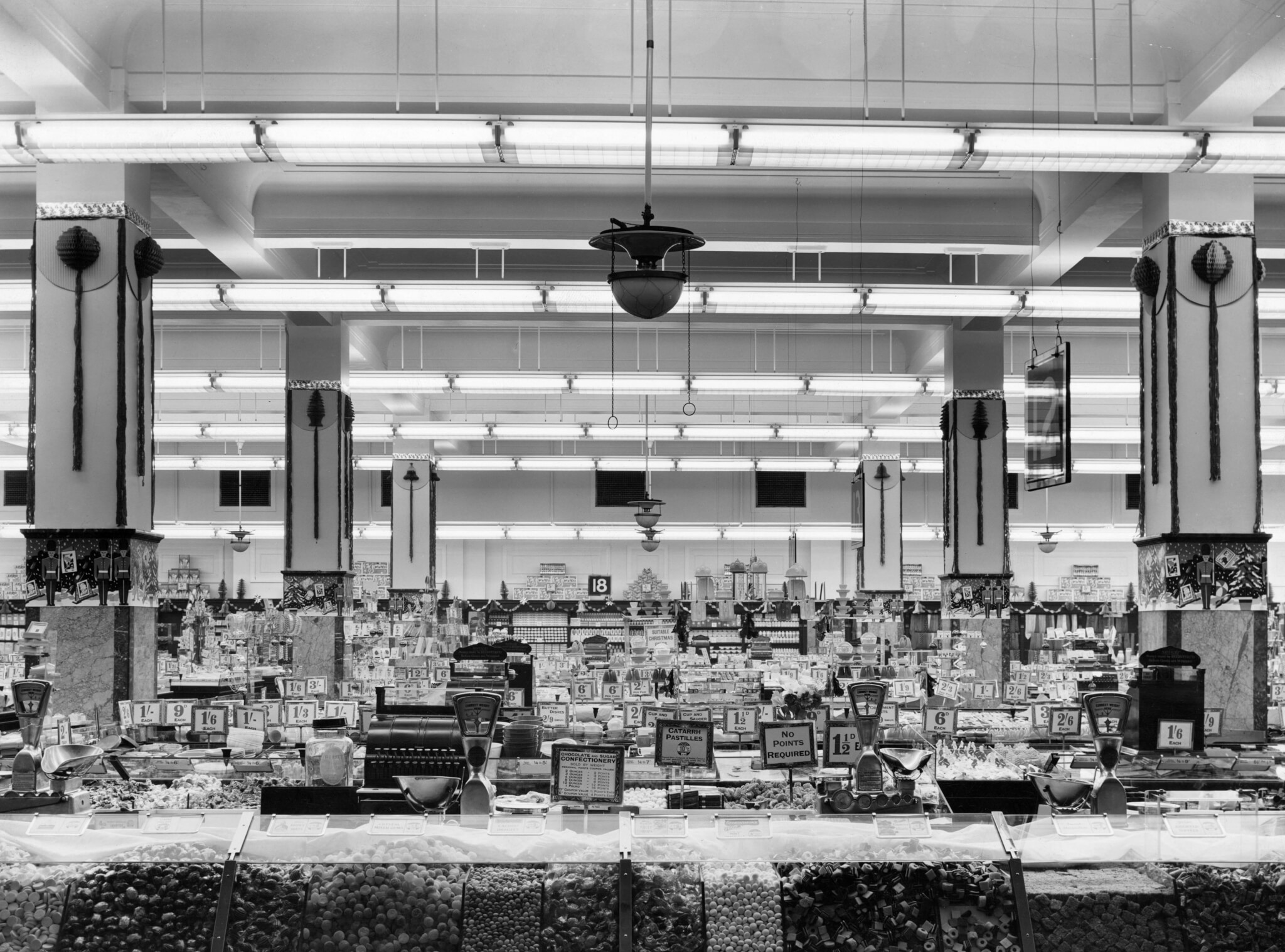 Woolworth’s bright red signboard was a beacon on British and Irish high streets for nearly a century. Here author Kathryn A Morrison takes us through her favourite memories of Woolies.

Researching Woolworth’s stores in Great Britain and Ireland allowed me to wallow in childhood nostalgia. I clearly remember the old counter-service Woolies – customers clamouring for the attention of the ‘girls’, or testing the gigantic red scales that always stood in the entrance.

In fact, as a very small person, I discovered the joys of pop music in my local Woolworth’s, jumping about with excitement to The Beatles’ She Loves You. Only years later did I realise that it must have been the ‘Embassy’ cover version, recorded especially for Woolworth’s by an invented group, ‘The Typhoons’.

Kathryn A Morrison’s book Woolworth’s 100 years on the High Street is available to buy.

Woolworth’s and I rather lost sight of one another until, many years later, I became an architectural historian and developed a fascination for high street buildings. I featured Woolworth’s in my book English Shops and Shopping in 2003. Shortly afterwards, Historic England (then English Heritage) was fortunate enough to secure a wonderful collection of plans and photographs from the Architects’ Department.

The first Woolworth’s store opened in Liverpool in November 1909 and the last closed in January 2009 – very nearly, but sadly not quite, a full century. In that time the company opened well over 1,000 branches, becoming one of the greatest retail empires in Great Britain and Ireland.

In my view, Woolworth’s reached its architectural peak between the wars, erecting memorable buildings that took pride of place on shopping streets up and down the country. Most, like my local branch in Stornoway, had small brick fronts but were cavernous once you stepped inside.

The largest stores, like Blackpool, were designed in the art deco style and equipped with vast up-to-date cafeterias. Today, none of these buildings carries a ‘Woolworth’ signboard, but their architecture was part of the brand and makes them instantly recognisable – provided you know what you’re looking for!

Here are 8 classic features to look out for on the high street to help you to spot an old Woolworth’s store:

Many of Woolworth’s distinctive bronze-framed pre-war shopfronts, with their curved glass corners, survive. Examples can be seen in Ilkeston and Hertford.

Because the preferred position for Woolworth’s stockrooms was over the shop, the first-floor windows were fitted with opaque glass. This maintained a neat outward appearance.

Many 1930s stores were clad in glazed terracotta or faience (manufactured by Shaws of Darwen) and adorned with geometric decoration. Dark brown faience often imitated bronze panels beneath windows: you can see more examples at Blackpool and Sunderland.

Examples of Woolworth’s famous emblem can still be found, notably on the tiled floors of entrance lobbies, for example a pre-war example at Ludlow, and a post-war example at St Ives (Cambs).

In the 1920s a lion’s head adorned many stores, signifying reliance on British goods and disguising the company’s American roots. Lions can be seen in Bath, Bedford and on the Strand in London.

In the 1950s and 60s, fascias and columns were clad in ‘Woolworth red’ or grey mosaic tiles, and many examples have survived to the present day. A complete red mosaic fascia – minus the lettering – was recently uncovered in Letchworth during renovations.

Before the war, most Woolworth’s stores were fitted with tin (actually pressed steel) ceilings, stamped with the ‘Plastele’ pattern. Many survive, for example in Ely and Ludlow, although most have been concealed by later suspended ceilings.

Store interiors were decorated with primrose-coloured steel plaques pressed with the ‘Diamond W’ and swags. I have never seen a surviving example, so please let me know in the comments below if you find one.