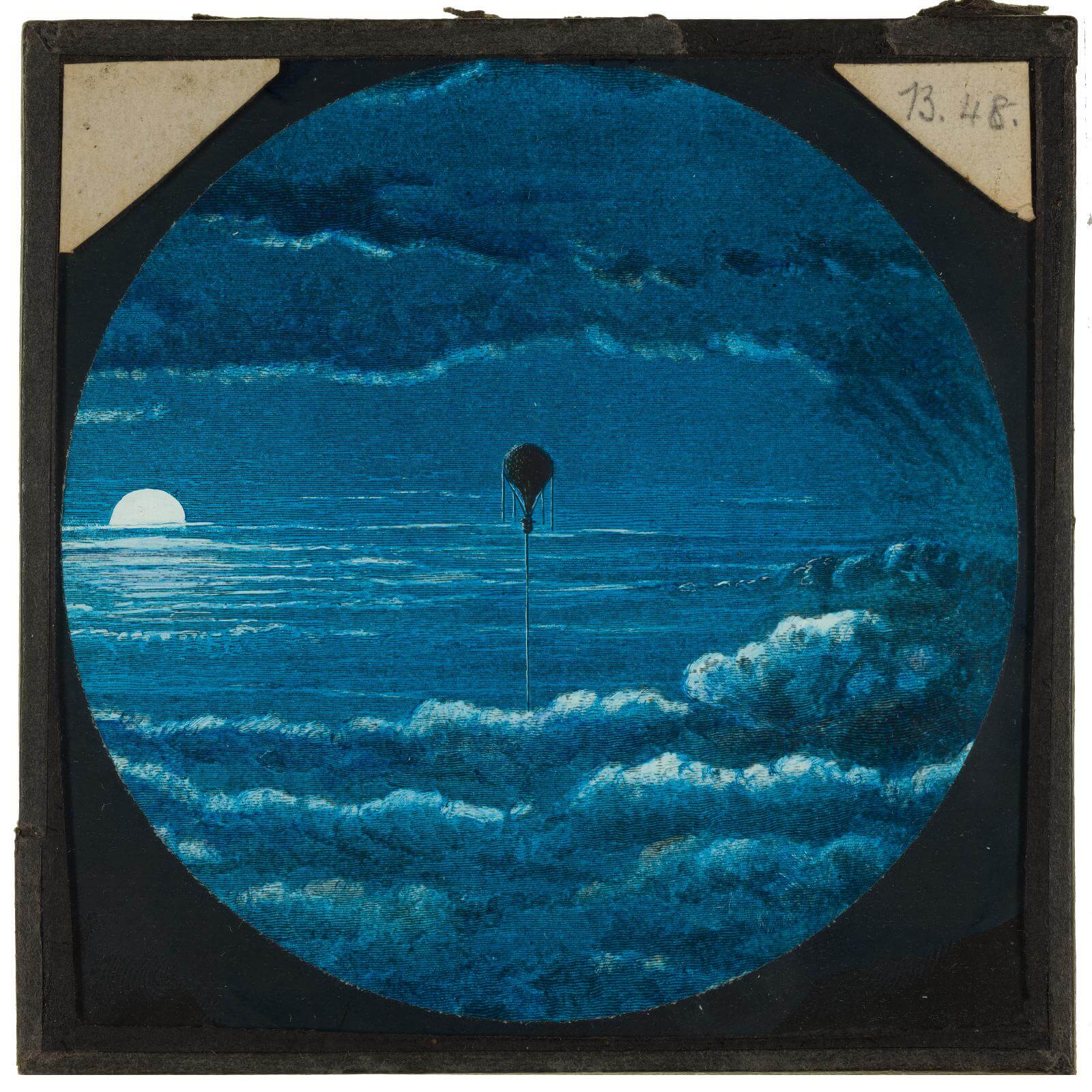 We have recently acquired the earliest surviving aerial images of England, discovered last year at a car boot sale. They were taken between 1882 and 1892 from a balloon by photographer and balloonist Cecil Shadbolt who was trying to map the rapidly changing London from the air. He tragically died in a balloon accident aged 33.

This important collection of 76 Victorian glass lantern slides has now been conserved, digitised, catalogued and researched and is available to view online.

It is not clear when Shadbolt became interested in ballooning. For a long time ballooning was a dramatic spectacle associated with fairground attractions but from the mid 1840s balloons were beginning to be used by very early photographers trying to capture the view from above. It was incredibly difficult to get a clear image because the balloon was constantly moving, but advances in camera and plate technology during the previous decade, coupled with Shadbolt’s invention of a hinged plate, which firmly attached the camera to the basket, allowed him to take the striking aerial images in this collection.

The spectacle of ballooning

Although people were enthralled by air balloons, some balloonists suffered at the hands of crowds on their descent. After his first ascent on 29th May 1882, Shadbolt wrote, ‘Came down in a field of green corn and experienced very rough treatment at the hands of the crowds who tore the balloon and Barker’s coat in addition’.

Almost all of Shadbolt’s early balloon launches were from sites in London where often excited crowds gathered in anticipation, including Alexandra Palace, Crystal Palace and Lillie Bridge Park.

The Shadbolt Collection contains the earliest surviving aerial images of England, including this photograph of Stamford Hill in north London, taken during a balloon flight on 29th May 1882. Shadbolt wrote an account of this flight, describing how ‘people walking on the pathways, although too small to be recognised, are nevertheless to be distinguished’. He also described a ‘curious cracking sensation in the ears’ – his first experience of his ears popping during flight.

Mapping London from the air

The collection does not show London’s major historic landmarks – there is no Tower of London, St Paul’s Cathedral or Houses of Parliament. Instead Shadbolt was capturing the suburban fringes of the city, or places undergoing great change such as the Thames-side docks and wharfs. In other words, he was trying to map the places which had transformed since the last Ordnance Survey map, using the airborne camera as an instrument of scientific observation and record.

The history of ballooning

The glass slides in the collection were used by Shadbolt in his ‘magic lantern lectures’. Called Balloons and Ballooning: Upward and Onward, in these lectures Shadbolt detailed the history of attempts at flight and ballooning using his aerial images and beautiful hand painted slides.

Included in the slides is a depiction of the first dramatic attempt to reach the highest altitude in a balloon. On the 5th September 1862 Dr James Glaisher and balloonist Henry Coxwell  ascended to 5 miles in just under 2 hours- higher than anyone had ever been before. The extreme altitude left the pair unable to speak, see or even properly move their limbs and they found it increasingly difficult to breathe. Glaisher fell unconscious and Coxwell, who had lost the use of his hands which had frozen and turned black, managed to open the balloon’s valve by seizing the cord in his teeth, allowing the balloon to descend. Miraculously, the pair landed safely, having reached somewhere between 30,000 and 37,000 feet.

This view of the Crystal Palace and the Italianate Garden was taken from a tethered balloon flight and is the earliest known shot of the palace from the air. During a later flight from Crystal Palace Park, on 29th June 1892, the gas filled balloon tore apart and quickly crashed to the ground. “Captain” William Dale, the owner of the balloon, was killed instantly and Shadbolt died later in hospital from his terrible injuries. He was 33 and his ballooning career had lasted only a decade.

Search other aerial images of Britain

Buy prints from the collection

Can you solve our Archive mysteries?